In my previous post, I compared the look of the truly excellent and beautiful Dura Ace components from the mid 1980s to the 2013 Di2 version of today. The newer components contrast heavily with the older counterparts -- looking much heavier, bloated, with huge appendages to house their servos -- not to mention the battery packs and control units that have to be attached to the frame. Today, I'd like to do a "then and now" comparison of Campagnolo's Super Record components, particularly the electronic-shifting EPS versions.

First of all, take a look at an early-to-mid 80s Super Record rear derailleur. The contrast of the black and silver is, I think, really gorgeous. The derailleur is svelte and spartan. A real classic.

Then take a look at the current edition Super Record EPS electronic derailleur. I do think Campy does a somewhat better job of incorporating the electronic workings into the design than Shimano does on the Dura Ace Di2. But it's still a bit strange-looking. Although I'm a huge fan of the classic silver/black/titanium look of the old SR, I do admit that there is something kind of cool about the all-black carbon fiber weave throughout the new SR rear derailleurs. . .

But I think the traditional cable-operated version looks even better.


Unfortunately, the Super Record EPS front derailleur is a stylistic nightmare. . .
Other parts of the group still look huge and bloated next to their 80s counterparts. The crank is a pretty nice design -- fairly reminiscent of the late 80s C-Record (Corsa Record) crank, rendered in carbon fiber instead of aluminum. I know the brake levers have a good feel to the hands which is of course desirable -- but they look visually heavy and misshapen compared to the classic drilled silver brake levers of the past. 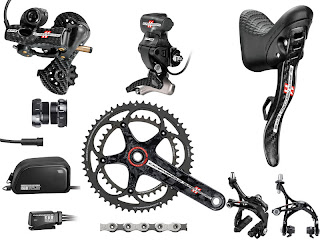 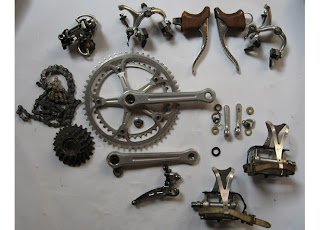 And the old Super Record crank is a slender, pretty, almost delicate-looking design. Unfortunately, however, the old crank apparently proved to be fairly delicate in use, as well, as stories of cracked ones are abundant. Oh well. Consistency is not a human trait.

One question I have to wonder is whether the new components truly save that much weight compared to the old. They are rendered in carbon instead of aluminum, but they're also in many cases much thicker or physically larger. And then there are the battery packs etc. to add into the mix. I'll have to look up the answers to that one -- but I'm not really that concerned about a few grams here and there, so I'm not in a big hurry.

I will say this in defense of the new. Particularly with the Campagnolo parts (perhaps not with the Shimano, which worked great by any standard) -- the newer Campy parts, even the traditional cable-operated ones, functionally work so much better than the old. I like the old stuff, and ride it regularly. But shifting performance of the old drop-parallelogram derailleurs is nowhere near as good as on the modern counterparts. The new brakes have a good, light feel to them and stop the bike with far less effort than the old ones. I'm not a total curmudgeon here, after all.

Next post -- do we really need electronic shifting? Is it really the improvement that it's supposed to be?
Posted by Brooks at 2:14 PM