The Retrogrouch Past: Influences

Every now and then, a little self-reflection is a good thing. When I look at myself in the mirror, sometimes I ask myself probing questions. Am I where I wanted to be in life? Am I happy in my job? When will I get that mole looked at? Why am I such a Retrogrouch?

I can talk here about that last one. I have a long Retrogrouch past. It's practically in my bike DNA. I also had a lot of retro-grouchy influences during my bicycling education.

I have always liked bikes. Always. And I got really interested in bikes at the tail end of a great time -- a classic period, if you will. Lightweight road bikes were king. Good bikes were steel, and they were lugged. The Japanese were cranking out really nicely made bikes and components that didn't break the bank. And probably as much as anything else, Breaking Away was released in theaters when I was maybe 13, and I wanted to be that kid Dave Stoller. It was formative.

Unlike a lot of kids, I didn't quit riding as soon as I turned 16 and got a drivers license. I did buy a car at 17 but quickly discovered that there is no bigger waste of money than buying gas, so I started riding my bike to  my summer job. That was also the year I bought my first "real" bike. It was nothing like the bikes I would go on to own and ride, but it started me down the path that brought me here.

I remember going into a bike shop in Cleveland's east side, Al's Bike Shop, where I had heard I could find something nice. The place had been there forever. Whoever had suggested I try Al's didn't warn me that Al, as it turned out, was a major grouch. I asked about some of the bikes, and what was good, or better, and he grumbled "They're all the same -- only the stickers are different" (try to imagine Cap. Quint from the movie Jaws saying it). I don't know if he was always that grouchy, or if he got that way over time -- but it seemed like he really thought bikes (or the bike business, perhaps?) weren't what they used to be. Man, if he were still in business, what would he think of bikes today where many of them really are pretty much the same, made in the same factory in China, regardless of brand, all equipped with the same Shimano components -- different by little more than the name on the downtube?

Anyhow, I didn't buy my bike from Al's. I ended up at the same Schwinn dealer where I'd bought the old upright 3-speed delivery bike I'd been riding for the previous 5 years. I really wanted a Schwinn Paramount, though I would have "settled" for a Super Sport. Couldn't afford either, though, so I got the closest thing that I could, which was a Super LeTour. Still, it was a decent bike to get started with. Lugged frame. SunTour components. I rode it everywhere, and I learned a lot about bikes and riding with it.

I didn't give up on Al's though. There was something about the place, and something about Al that kept me wondering. Was he that grouchy with everyone? All the time? Had things once been different? I'd stop in there now and then to look around. There were bins of old parts and accessories with a layer of dust that said they had been there a long time. There were old Brooks saddles, and tins of Proofide. There were new-old-stock parts from French makers -- Huret, Simplex, and more -- with or without boxes, that looked to be ten years old or more. This was a pretty cool place.

And there was Al. Grouchy and irascible as ever. I remember once asking him about clinchers vs. sewups and I thought he was going to explode. But I kept going back.

One day, I was looking in one of the old glass cases, and a few things caught my eye. There, still in boxes, were a bunch of old Campagnolo parts -- at least ten years old at that point. Nuovo Record derailleurs. Hubs. Pedals. A crankset. There was a chromed steel Cinelli stem, with the old logo coat-of-arms badge on it -- all new-old-stock. I asked Al about the old parts and suddenly his tone changed. It was like a switch had been flipped.

"C'mere," he said, waving me to the back of the shop. I followed. He led me over to a big old steel cabinet. There was a padlock on it. He unlocked it and opened the double doors wide. There inside, from top to bottom, every shelf filled deep, were boxes and bins full of Campagnolo parts. Components of every type. Spares. Small replacement parts. Chainrings. Some tools. Tins of Campy's "special grease." Everything. Some nice old Cinelli stuff, too.

Al took out parts to show me and we talked about them -- Campagnolo, Cinelli. We admired the little decorative details in a Nuovo Record rear derailleur that had no functional purpose whatsoever other than making the piece look special. We talked about classic bikes. Vintage Raleighs and Peugeots. Colnagos and DeRosas. The bike boom. Italian vs. Japanese components. Whatever it was, I had just earned Al's respect. After that, any time I'd walk into the shop, Al would greet me happily by name. Sometimes when I'd visit, he'd show me some cool old vintage component or tool or something he'd unearthed in the basement of the shop.

Some years later, I was restoring an old 1970 Raleigh Professional, and I made lots of visits to Al's to get replacement vintage Campy parts. When I brought the completed bike over to show him, looking for all the world like a brand-new bike, the guy got misty. Seriously. 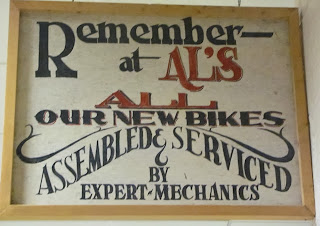 Some time in the 90s, after all those years in business, Al decided to retire and close up the shop. There was going to be an auction for pretty much everything left in the store. Before that happened, though, Al gave me a stack of old bike advertising posters he'd kept for years, and he let me poke around and buy pretty much anything I could before the auction. I bought his shop repair stand, wheel truing stand, a bunch of old Campagnolo tools, some spare parts, and even the sign that hung above the door to the shop. Sentimentality, and all. I couldn't go to the auction, but I heard that somebody from out of state was there and bought the entire cabinet of Campy parts. If I had to guess, I'd say that the contents have been sold bit by bit over the years on eBay.

When I first encountered Al, bikes and the bike business were just starting to change, though nothing like the change that was coming. Still, I guess Al apparently didn't like the way it was going. He obviously liked what was old better than what was new -- and I'll bet not too many customers were coming in who shared that appreciation. I think the fact that I had that appreciation for those vintage goodies was the thing that made him warm up to me. The name hadn't yet been coined, but I suppose Al may have been a prototype Retrogrouch.