A Bicycling David and Goliath

I've been seeing a lot of posts around the internet about this within the last few days or so: Specialized is suing a little bike shop in Alberta, Canada because of trademark infringement. The shop, which opened last year, calls itself "Café Roubaix" and specializes (not "Specialized") in road bikes and road racing equipment. Lawyers representing Specialized have demanded that the little shop stop using the Roubaix name. Talk about your "David and Goliath" situations.

Here is the story, as originally reported in the Calgary Herald 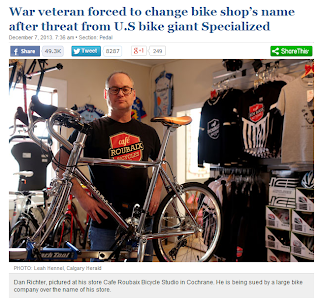 Apparently, Specialized has trademarked the name "Roubaix" in Canada as intellectual property, specifically for its bike frames and components. Of course, the shop's owner, Dan Richter, named his shop after the classic bicycle race in France -- not after the Specialized "Roubaix" bike model (I mean, who would name a whole shop after one model of bike?).

The lawyers for Specialized say they are required to protect their trademark or risk losing it. That may be so, but the thing is, how on earth did they even get a trademark granted for the name of a region in France? A region famous for its 117-year-old bicycle race? A region that has seen its name used on numerous bicycle-related products and items over the decades? Challenge-brand tires (previously Clement) and other brands have offered "Paris-Roubaix" tires for decades. There are bicycle clothing items that bear the name. Fuji bicycles even has a bike called "Roubaix," which is potentially more confusing (well, confusing for someone with no sense) than seeing the name on the front of a shop. If anybody has grounds to be upset, it's the people of France.

The thing is, protecting intellectual property is one thing. But it's not as if Specialized created the name, or was even the first to apply it to bikes and/or components. In fact, when anybody involved in cycling hears the name "Roubaix," I doubt that the first thing anyone thinks of is the popped-out-of-a-mold plastic bike with the gimmicky "zertz" gummy shock absorbers. Not only that, but typically in these kinds of trademark-infringement cases, one standard of proof that the plaintiffs have to meet is whether a reasonable person would likely be confused by the names. I don't think Specialized would be able to meet that burden.

Between the long history of the Paris-Roubaix bicycle race which is legendary in the bicycling world, and the list of other products (including bicycles) that bear the same name, it's possible that if he could afford to fight it, the "little guy" could win against the giant corporation. But unfortunately, according to Richter, just the legal cost of fighting it is way out of his league.

Then again, as I was writing this article, I saw a positive update to the story -- published just today -- in the Calgary Herald. According to the follow-up story, since the news spread via the internet and social media, Richter has seen a huge outpouring of support from around the continent. "There were lawyers offering to take up his case pro bono, cycling fans raising money on his behalf, Twitter users organizing boycotts against Specialized, and hundreds of others who placed orders for his products. He quickly sold out of Café Roubaix t-shirts, and is hurrying to print more." Richter went on to say "This is encouraging and exciting, and I'm finding it very humbling as well. I'm really amazed by the level of support. It's overwhelming."

I'm glad to see a little shop like Café Roubaix getting that kind of support -- I'm sure that if he chooses to fight it he'll have a tough challenge ahead of him, but I hope this all works out for the best.
Posted by Brooks at 2:40 PM