There was a time when the way something looked was nearly as important as its function. I know I'm going to get some push-back from people who tell me that there is just as much emphasis on design today as there ever was (which is true) -- but what I'm talking about is just a bit different. And I don't think it's simply a question of preferring older styling to modern styling. What I'm getting at is that things once had a certain touch that existed for no other reason than to make them more interesting to look at -- whether one is talking about bike parts, or tools, or nearly anything really.

My grandfather, who liked working with wood, had a lot of hand-tools in his garage. One of the things I remember about some of the older tools on his workbench was that some of them had really interesting details that served no function whatsoever. The wooden grip on a handsaw would have a design engraved on it, for example. It was there only to make the tool more interesting -- a sign that somebody spent a little more time to make it special for the person who chose it, used it, and maybe even passed it on to someone else. Even though some of the tools were probably mass-produced, they still might have been blessed with these little touches. 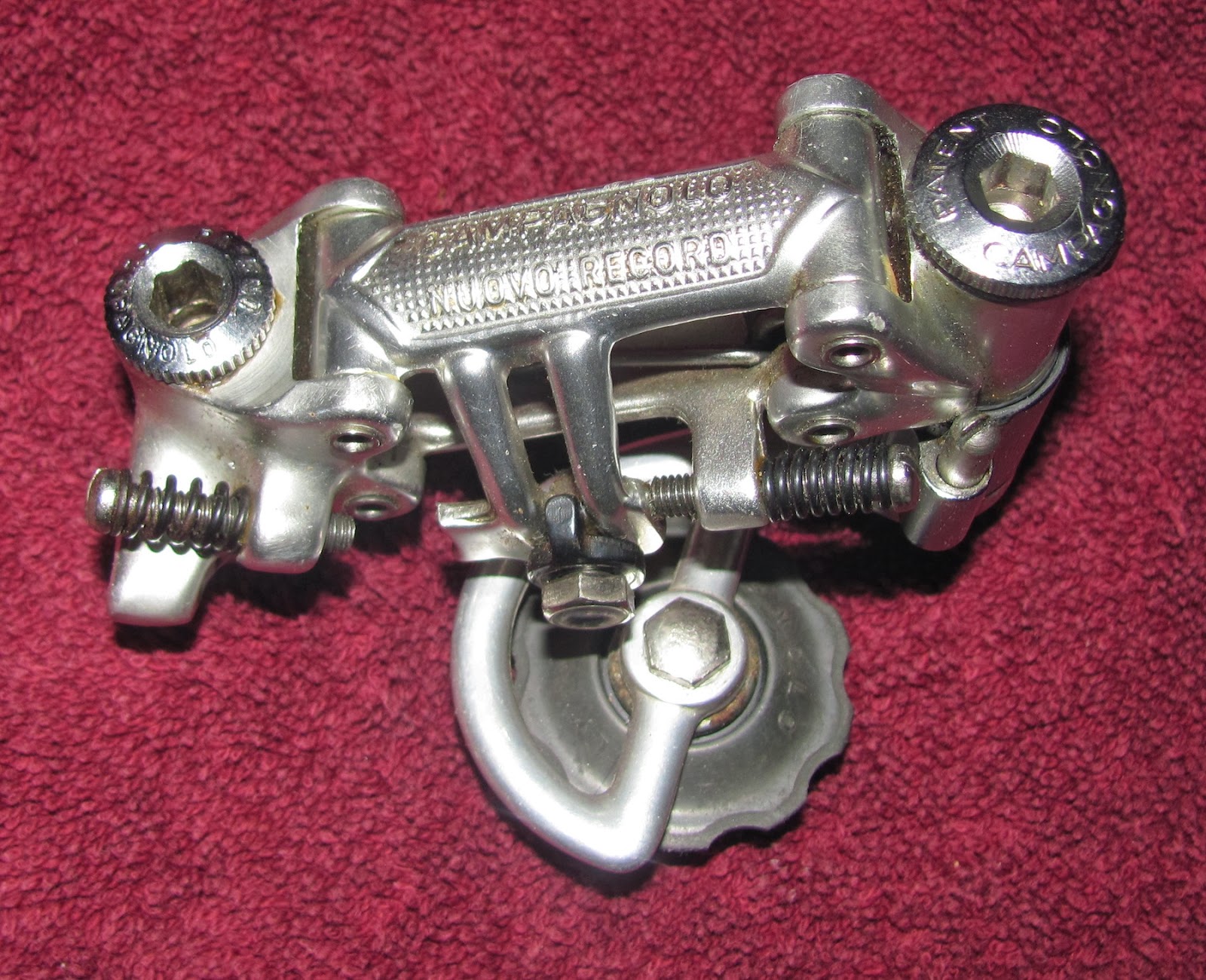 Bike components were like that once, too. When I was young, first starting to admire high-end bicycles, I was often struck by the attention to detail in some of those components. Look closely at a Campagnolo Nuovo Record derailleur. Notice the raised lettering on that textured background, and the little scroll-like details. Those details didn't make the derailleur work any better, but they made it much more beautiful to look at. The first generation Super Record unit shared that style, but later versions went for a simpler, smoother face plate and a screened-on Campagnolo script logo. They were still beautiful in a functional, minimalist way, but there's something more tactile about the NR that I admire a little more.

That scrolled and textured theme carried through to the shift levers and even the quick release levers, as well. I always knew my wheels were installed properly when I could see that raised Campagnolo name momentarily visible in the palm of my hand. The careful milling in the Campagnolo crank, likewise added some visual interest, while lightening the crank just a bit.
Other companies of that same era also spent some time with little decorative details. Look at an early generation SunTour Cyclone derailleur -- which was a touch lighter than Campagnolo, and shifted better than anything of its day. It wasn't quite as interesting as the Campy NR, but notice the raised logo and lettering, on a neat fine-textured background. The finish on these is nearly as nice as the Campagnolo derailleurs, yet they were a fraction of the price. They also made a long-cage touring version for a wider gear range. They were really nice parts for the money, and I still like using them today. Most vintage bike nuts are probably well aware that the SunTour derailleur design became the basis for most modern derailleurs -- with its slanted parallelogram that better followed the angle of the freewheel, thereby keeping a more constant gap between the top pulley and the cogs.

Another competitor of the classic era that marked the epitome of decorative details for decorative sake was the Shimano 600 set -- sometimes called "Arabesque." These had the little scroll-like details and engraving all over the face plate, and even on the edge of the pulley cage!  Likewise, the shift levers, and to a lesser extent the front derailleur and crank, all shared the scrolled details. The parts looked special, and worked pretty well, too. Today's components may, in some fashion or another, actually work a bit better than these parts from the past -- but to my mind they lack those little details that make them more enjoyable on a level beyond the purely functional. 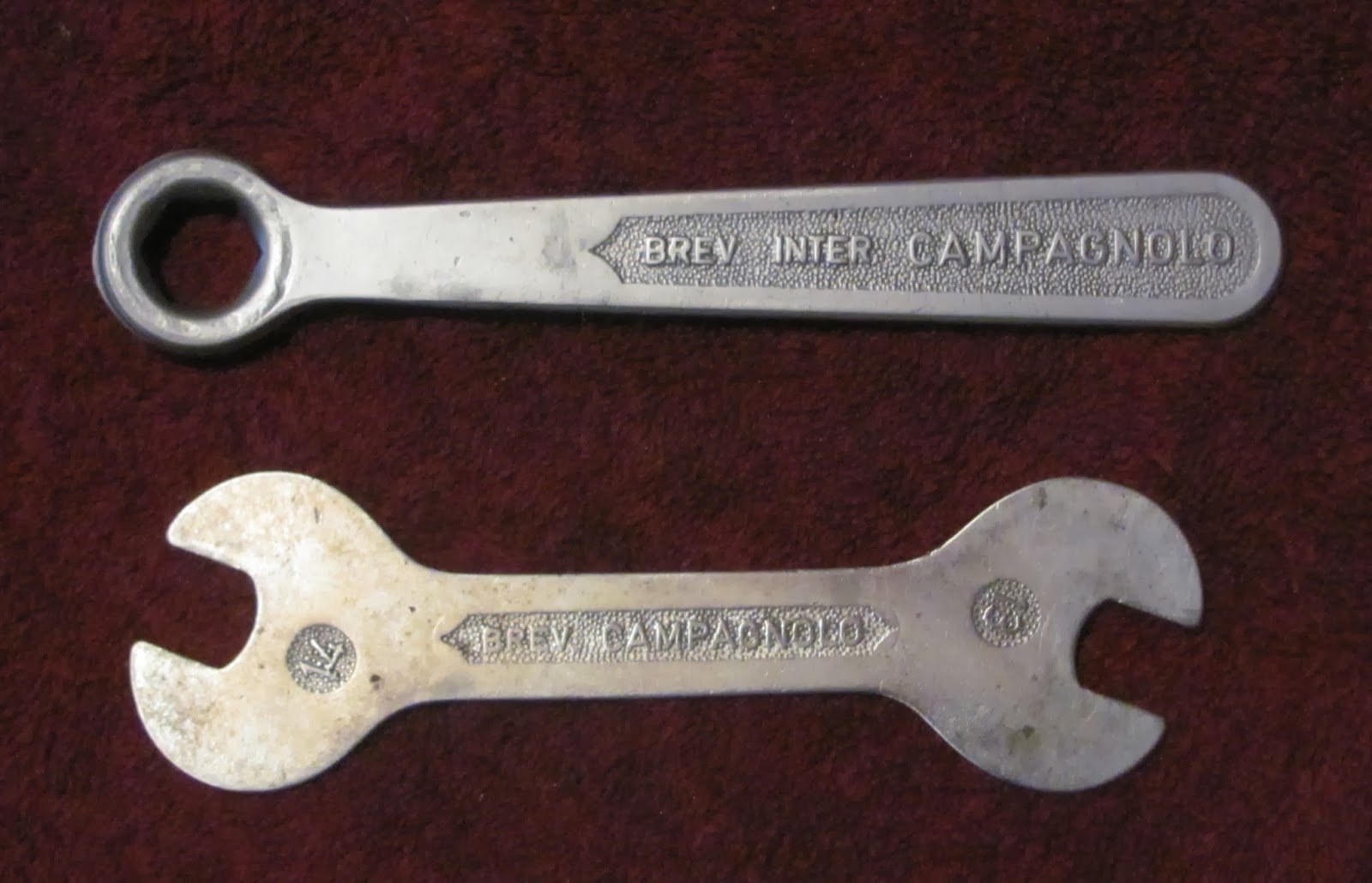 Campagnolo tools also followed the philosophy of looking good for the sake of looking good. Perhaps the most notable would be the cone wrenches -- which are perfectly designed for their purpose, fit the hand nicely, but also have the great visual detail of the Campagnolo name against a pebble-textured background. The crank bolt wrench, also known as the "peanut butter wrench" is another one -- a tool that I love to feel in my hands -- but which is also somehow more "satisfying" to use than similar tools that lack the interesting visual detail.

As I said at the start -- I'll probably hear some arguments from people who say there's no comparison in performance between these 30+ year old parts and the components of today. Some might even say they don't mind the styling of modern components, either. Granted, on the bland and bloated popped-out-of-a-mold carbon fiber bikes of today, these decorative, almost delicate-looking derailleurs would look incredibly out-of-place. On the other hand, that's just another thing I love about traditional lugged steel frames. They are enjoyable on a different level -- not just for their wonderful ride, handling, and "feel" -- but for those little visual touches that make them special. Some people call it "soul." I hesitate to use that term, but I'm not sure what word fits the intent any better. The bikes, or the parts, or even the tools might be hand-made, or just look like they are -- but somehow, the fact that they have that artistic essence imparts something special, making them much more desirable for me.
Posted by Brooks at 5:03 PM