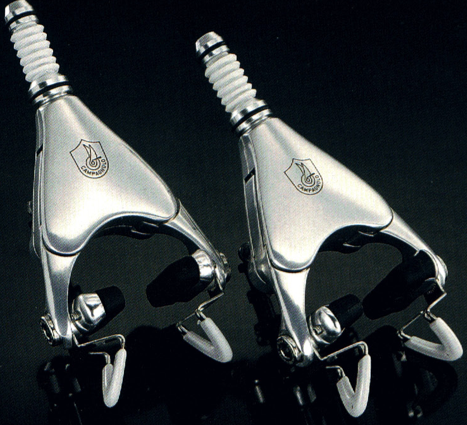 When it comes to vintage bicycle brakes, die-hard fans tend to have their personal favorites, but in general, most good-quality brakes tend to look and work at least similarly to one another. But there is one brake that garners more "oohs and ahhs" than any other, even among people who couldn't tell a centerpull from a sidepull, or a single-pivot from a dual-pivot brake. That would be the Campagnolo Delta.

First introduced in 1984 (though not actually available to the public until almost two years later), the Campagnolo Delta was an unusual, although not entirely unique, design. Modolo made a similar brake, called the Kronos, as early as 1981, and Weinmann also sold a version in the 80s that was in all likelihood made for them by Modolo. The Deltas were and still are the most famous and recognizable of the type, however, being the most beautifully built and finished. Seriously, there are people out there who lust after these things in an unhealthy way. Search for them on eBay and find prices ranging from $400 through over $2000 for the ultra rare first editions.

Originally released with the C-Record group, the Deltas were a centerpull design that utilized an articulating parallelogram to actuate the brake arms, as opposed to pulling a straddle cable as used in traditional centerpulls. They got their name because, obviously, the mechanism fit into a triangular "delta" shaped package that was smooth and aerodynamic-looking. The supposed benefit of the design was that it would offer variable mechanical advantage -- with that advantage increasing over the range of lever travel. The reality was that they were heavy, complicated, and provided only mediocre braking power -- a classic case of form over function.

There were five versions of the brakes made. The elusive first edition was quickly pulled from the market because the cable mount could fail, leaving the rider with no brakes at all. (The "Cobalto" sidepull brakes -- Super Records decorated with a blue jewel -- were offered as a substitute until the problem could be sorted out). Subsequent iterations made changes to the parallelogram mechanism to fine-tune the mechanical advantage, or made changes in the adjustment hardware, brake pads, etc. There were also two versions, or "levels" of Delta brakes -- one for the C-Record, and another version for the Croce d'Aune group. The Croce d'Aune versions can be distinguished by their external springs, while the C-Record version had springs hidden inside the housing.

The fact that many people have a passion for the Deltas should not overshadow the fact that they were in actuality a deeply flawed design from an engineering standpoint. One notable critic of the design was Jobst Brandt, an engineer who is perhaps best known for his book The Bicycle Wheel -- one of the definitive texts on wheel building. According to Brandt, the Delta had "a non-linear characteristic that increased the mechanical advantage as the pads wore down . . . the required additional pressure (on the lever) advanced the brake into the lock-up region of leverage." (http://yarchive.net/bike/brake_leverage.html)

Jobst Brandt engaged in numerous arguments about the Deltas (and many other bike technology issues) on the old rec.bicycles newsgroup. An archive of his postings to the newsgroup can be found HERE. The body of his work should be required reading for any Retrogrouch. In reading posts from the Delta's admirers, it seems that many of them argue in defense of the brakes from an emotional standpoint (e.g. "they're beautifully made," "so-and-so raced with them," "I know a guy who swears by them" etc.) rather than from a logical, engineering viewpoint. Given a choice, I'll put more faith in Jobst Brandt.

Here is another Brandt excerpt:

"The first to (declare the Delta brakes dangerous) were the sponsored pros who refused to use them after enough riders crashed and others had spooky experiences. I am working from a riding experience and from standard brake technology in which variable ratio brakes are known to be useless. I worked in brake design for several years at Porsche. I reviewed the Delta brake . . . it should be mechanically obvious that a regular parallelogram when at the extreme extended position (cable fully extended) has zero mechanical advantage and at the other extreme (the cable corners together) has infinite mechanical advantage. This is not a logical range in which to operate a brake."

In any case, the Delta brakes have their fans. My guess is that a lot of those fans are putting more value on style than on actual brake performance. Certainly, the brakes attract a lot of attention visually. In my case, however, I never caught the bug. Given the choice between a pair of Delta brakes or any top-quality single-pivot sidepull brake, I'll take the sidepulls any time. I suppose it's another case where I just believe simpler is better, even despite the fact that the Deltas are now considered "vintage" or "classic." They may be beautifully made and finished, but to me they are not much more than an interesting curiosity.
Posted by Brooks at 5:51 PM