With a machine so functional, so efficient, and so simple as the bicycle, it's really hard to improve upon it. Therefore, it seems like every crackpot inventor since the 19th century has sought to do just that.

Now, the latest attempt to "improve" the bicycle comes in the form of the "Flying Rider": the first "Suspended Rider Bicycle." Even the name just rolls off the tongue, doesn't it? I would have called it the "Hang Rider" -- like "hang glider" -- get it?

Is saddle discomfort making bicycling unbearable for you? Well, the Flying Rider dispenses with the saddle altogether, and replaces it with a nice, comfortable harness around your mid-section and thighs, hanging you beneath a framework over the pedals.

From the website: "As he watched an uphill section of the 2011 Tour de France, Schwartz noticed that the bobbing motion of the riders looked like wasted energy." (He must have been watching Thomas Voeckler) "If only the rider had something to push his back against, restraining vertical motion and allowing more leverage on the pedals, then the bicycle would be more efficient."

Schwartz goes on to say, "It's the same effect you get when pushing a heavy sofa by sitting on the floor with your back against the wall." Ummm . . . really? That's not what I was thinking.

The "hanging" effect is currently accomplished with a mountaineering harness, which Schwartz acknowledges is "less than optimal for a bicycle, but it gets the job done comfortably." I'm inclined to believe that comfort is relative -- I mean, I know that when I'm riding, I often wish that I had a huge belt wrapped snugly around my midsection. Schwartz expects eventually to have a specially-designed cycling jersey with a harness already built-in. Rest assured, it will look really cool. 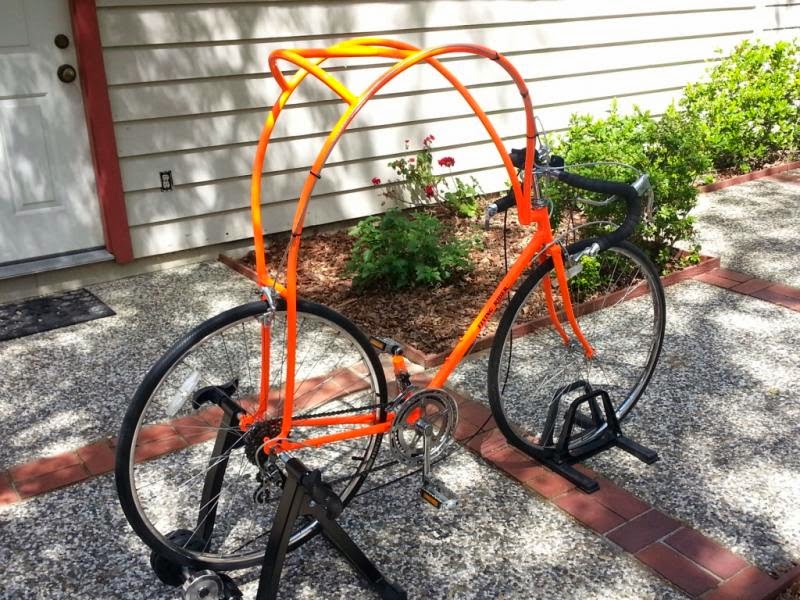 Not only that, but I love the idea of having to get all strapped into a harness in order to go for a ride. In fact, judging from the photos, it almost looks like you'd need help just getting hooked in. With the Flying Rider, the days of simply throwing a leg over the bike and riding off will just be a quaint memory of the dark ages.

Another benefit of the Flying Rider is that, in addition to the basic "pedaling mode," it also has a "flying mode" where the rider can stretch out as if on a hang glider. On the company's website, you can see videos of this thing in action. As entertaining as that might be on a long descent, I can't imagine the handling of such a thing would be exactly confidence-inspiring. At least it has a built-in roll cage.

The bicycle is a hard machine to improve upon. But thankfully, we'll always have dreamers.
Posted by Brooks at 11:05 AM