Some people don't trust simplicity. If something is too simple, they figure something must be wrong, and it must be improved. One of the most wonderful things about a bicycle -- the very thing that makes it so efficient and effective -- is its simplicity, and therefore tinkerers and "innovators" of all kinds are convinced they must be able to improve on it. 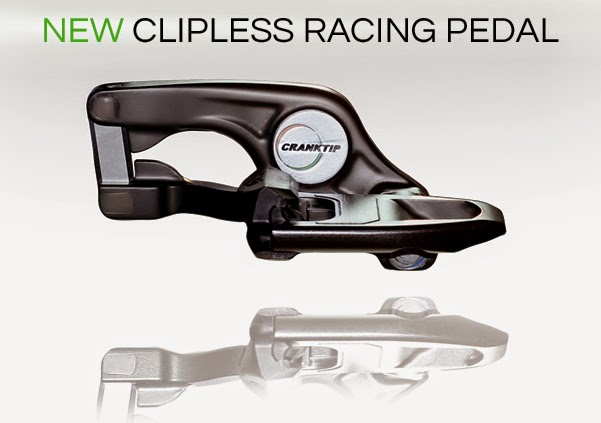 Pedals are simple. Too simple, apparently. So now there are these fairly complicated looking "swing-arm" pedals from Cranktip that are designed to vary the crank leverage, and therefore the pedaling torque, throughout the pedal stroke.

The company makes numerous claims about the performance gains one is practically guaranteed to see (and feel) by using these pedals. Their website makes quite a bit about "uneven forces" caused by the circular motion of a normal bicycle crank, which causes it to be "less efficient at producing rotating energy and as a result offers significant feedback or uneven resistance that the leg of the rider constantly absorbs." They go on to say that this feedback leads to leg fatigue, and is "something that riders have been unaware of in the past and until now, the feel of a crank has simply been what it is."

It must be a pretty serious problem if bicycle riders have been unaware of it for over a century. 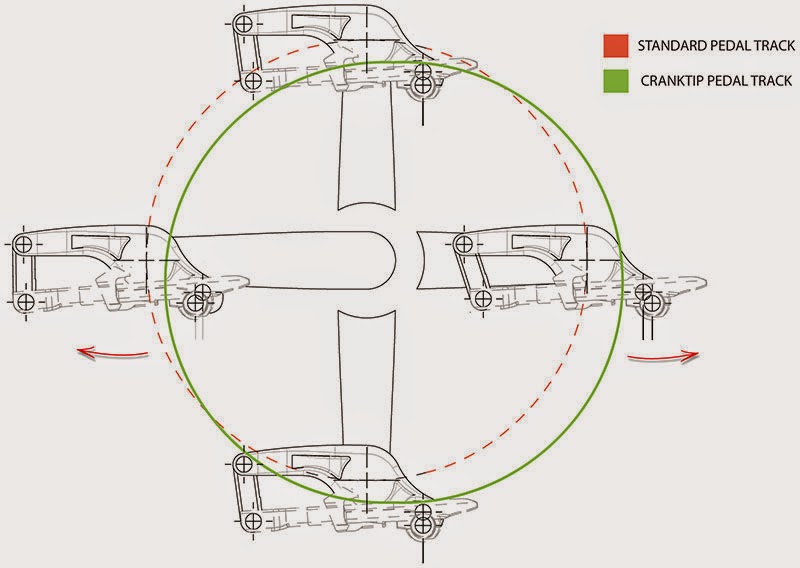 Another claim is that the pedals "increase power and efficiency with a notable reduction in heart rate." I'm a little fuzzy on how that is supposed to work, but okay.

About the swing-arm design of the Cranktip pedals, the company says that it repositions the rider's foot in relation to the pedal axis in the crank, effectively changing the length of the crank at different points in the pedaling circle. At the forward part of the pedal stroke, the swing-arm pedal pushes the rider's foot 12 mm lower and 16 mm further forward than a traditional pedal -- and yes, one would have to adjust their saddle position accordingly. The company claims that this movement "dampens and dissipates the varying forces experienced during crank rotation," resulting in a smoother crank action with less "feedback" and less fatigue, while also "providing greater power due to the increased crank arm leverage."

If one were tempted to compare the effect of these pedals to that of using ovalized chainrings (remember BioPace -- which was so effective that the industry giant Shimano eventually gave up on it?), Cranktip is quick to point out that it is not the same at all. From their site: "Whilst an oval chain ring manipulates the forces created by the crank arm, the overall energy provided by the crank system is ultimately limited by the length of the crank arm." They go on to say, "the Cranktip pedal simply increases the actual overall crank arm length to provide greater torque regardless of the chain ring being oval shaped or round."

The website has a video where one can see the pedals in action. Interestingly, the website only seems to  offer the clipless racing pedals, but the video also shows a flat pedal in use. Were those just a prototype? Or will they be released later? Who knows. Better yet, who cares?


One thing that never gets mentioned is how the extra swing-arm mechanism, which is situated between the actual pedal and the crank, affects the overall q-factor of the crank (that is, the measurement between the pedals -- or, how far apart the crank puts one's feet). I can't say for sure, but from just looking at the pictures and the video, I'd have to guess that the extra mechanism probably adds close to an inch in overall q-factor. For all the talk about how these pedals improve the biomechanics of the pedal stroke, and are supposed to reduce leg fatigue, etc., it seems a shame to ignore the effect of q-factor on leg fatigue and knee pain.

Also, I don't want to sound like a weight weenie, but for the target market (racers? triathletes?) I'd assume weight could be an issue with these. According to Cranktip's FAQ page, "Are they heavier than conventional pedals? Yes, however the trade off with weight to increase power is more than worth it." So, how much heavier are they? At 700 grams, they are more than double the weight of a pair of Dura Ace clipless pedals. And at $400, nearly double the price, too.

All the claims about increased torque, better biomechanics, more power, less fatigue, etc. etc. sound pretty familiar, don't they? The same claims have been made again and again by the makers of oval (or out-of-round) chainrings, crooked crank arms, and more. But I have a hard time believing that one gets more power and speed for free, and I'm not just talking about money.

Nevertheless, if people out there really are convinced that there is such a thing as a free lunch, then might I suggest the ULTIMATE drive train. Why not combine the Dpardo "Sickle Power Curved" cranks, with Rotor Q-Rings oval chainrings, or some vintage BioPace rings, and the Cranktip pedals? Hell, the bike will probably pedal itself! 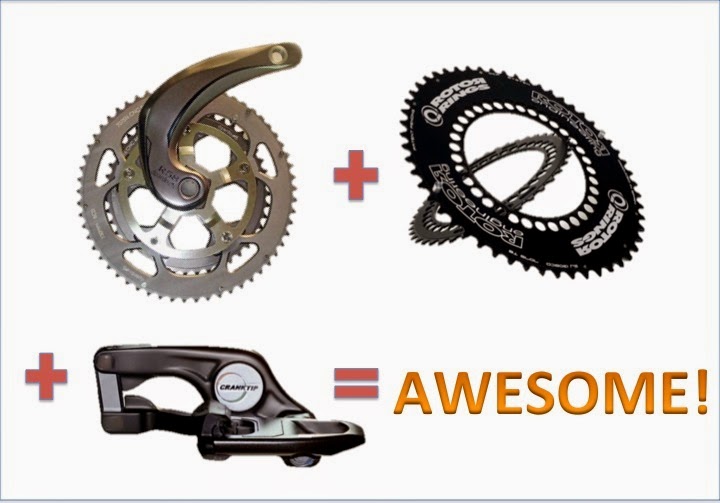 Everything is AWESOME!
Posted by Brooks at 10:12 AM