A platypus has a duck's bill, webbed feet, and lays eggs. But that doesn't make it a duck.

By that same principal, just because something has wheels and pedals does not mean it's a bike.

The Raht Racer is billed by its creators on Kickstarter as the "World's first highway speed bike." Nice, but No. The Raht Racer is a small, lightweight, electric car that happens to be equipped with a pedal-powered generator to extend its battery range.

From their Kickstarter page: "If you're a die-hard bike commuter who rides in all weather, that's commendable, but most of us have a hard time riding when it's cold, wet, and dark, not to mention, in heavy traffic." In other words -- biking is great, but what you really need is a car. And let's just be honest folks -- despite all the company's references to this vehicle as a "bike," the Raht Racer is a car.

The makers of the Raht Racer talk quite a bit about safety, noting that "there are more than 40,000 bike-car accidents every year." They describe the Raht Racer as "safer than a motorcycle, or bicycle on a busy street" and tout its "integrated roll cage, reinforced carbon fiber body and automotive safety features like headlights, tail lights, seat belts & air bag." All very nice -- but don't all those "automotive safety features" basically make it a car? Small and efficient maybe -- but still a car.

By the way -- not to sound nit-picky -- but the makers of this vehicle seem to make the same mistake made by many car-centric thinkers: to believe somehow that cars are safe. They note 40,000 bike-car accidents (they don't cite where they got that number, and I can't confirm it, but let's just go with it). Those accidents result in roughly 700 cyclist deaths per year. According to NHTSA, there are an average of more than 5 million vehicular accidents every year, resulting in well over 30,000 deaths annually, and about 1.5 million injuries. If I'm getting hit by an SUV, I'd rather it happen in my car than on my bike, but that doesn't mean cars are necessarily safe. There are all kinds of ways to get killed in a car.

The Raht Racer has some interesting features that make it an innovatively efficient zero-emissions car. For example, the pedal power is connected directly to a generator that recharges the batteries and extends the vehicle's range. It's worth noting that in no way do those pedals actually propel the vehicle. Like I've said, it is NOT a bike. Not only that, but all-electric drive is available at the touch of a throttle button, and the batteries can be recharged with a regular household power outlet. Pedaling can extend the range, but it's apparently unnecessary.

However, unlike most cars, one can, if they wish, get some exercise while they're on their way to work. Even when sitting at a light, apparently one can keep pedaling, and the car's computer can run a workout program. "You could be driving the flat lands of North Dakota, but experiencing the hills of San Francisco, even while stuck in traffic."

The makers also claim a top speed of up to 100 mph, and a range of about 50 miles. It seats two (though only one provides pedal power -- it would be nice if both could) and weighs a claimed 570 lbs. They expect it to be priced between $35,000 - 45,000. That might put it out of reach for many people, though there could be EV subsidies available to make the cost more manageable.

Don't let me come across as too negative about the Raht Racer. All one has to do on a typical work commute is look around them to see how the vast majority of vehicles on the road only carry a single occupant. A compact, lightweight, pedal-generator electric car would probably be a great option for many of those drivers. And I'm sorry to say that, based on the fact that they are less than half-way to their fundraising goal with only days left to go, they're unlikely to make it happen. Too bad. As a car, it's pretty cool.

Just don't call it a bike.

Taking a somewhat different approach, the Babel Bike is touted by its creator as the most significant innovation in bicycle safety "since the 1884 Rover Safety Bicycle." I suppose it is still technically a bike, but it stretches the definition. Maybe something like this should be called a "Pedal-Assisted Electric Vehicle." There is apparently a non-electric version, but I don't imagine anyone who would be interested in such a vehicle as this would buy it without an electric motor. It is currently seeking funding on Indiegogo.

Equipped with a "safety cage" in which the rider sits, the Babel PAEV includes seatbelts, built-in lights front and rear, turn signals and hazard flashers, a loud car-like horn, and huge rear-view mirrors. It also has large U-lock-shaped bars to protect the rider's feet. Basically, this thing is loaded with almost as much "passive" safety equipment as a modern car, lacking only airbags to go the full auto. The inventor, Crispin Sinclair of the U.K., says that the design of the Babel PAEV allows it to "bounce off" lorries (that's trucks to us here in the States) instead of being dragged under them. I have my doubts. If someone gets hit on this thing by a truck, the only difference is that emergency crews will have to spend a little more time extricating them from the cage. I could be wrong. Or maybe just realistic. 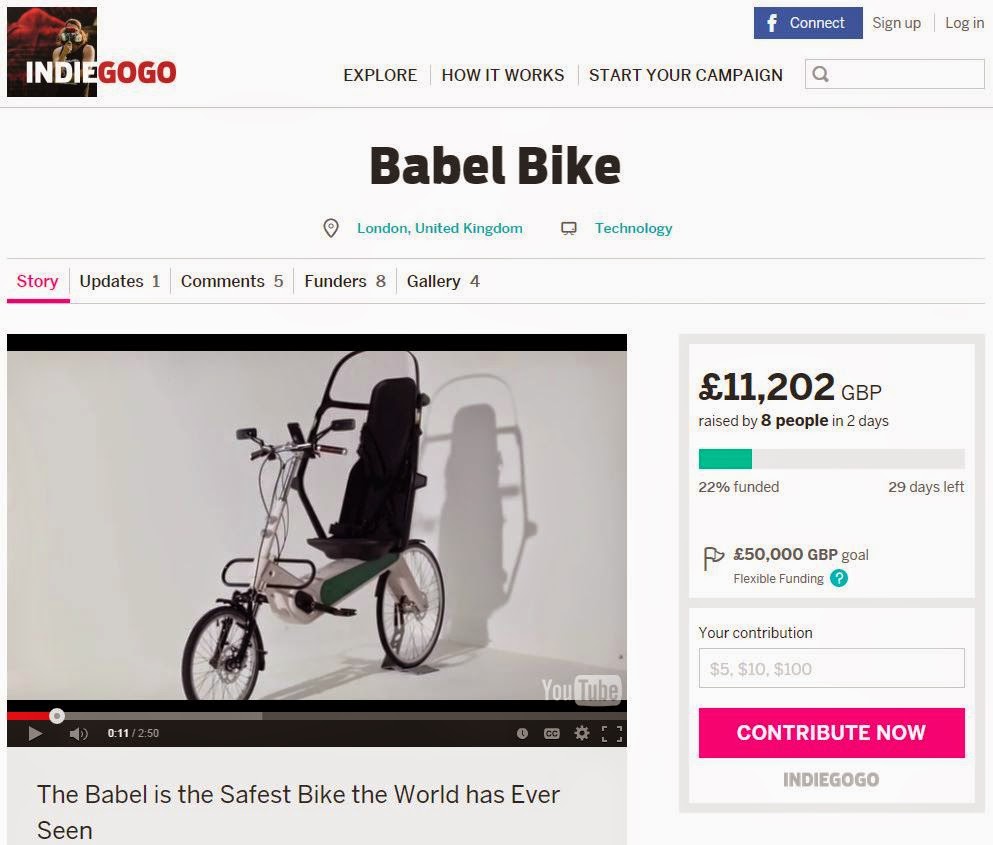 The folks at Treehugger.com say "There are a hundred reasons why this is a terrible idea. Cyclists shouldn't have to be in safety cages; they shouldn't have to defend themselves against trucks in the first place. If there was proper infrastructure for cyclists this wouldn't be necessary. If trucks and buses had side guards and proper mirrors and well trained drivers they wouldn't crush cyclists." Still, they say, "If every driver was well-trained, alert, sober, kept their eyes on the road and never made mistakes, we wouldn't need seat belts. Passive safety has worked in cars, might it not also work for bikes?"

Maybe. But then, isn't the whole point of a bicycle that it is something active, not passive?  After one adds all that "passive" equipment, is the vehicle still a bike?
Posted by Brooks at 12:14 PM