I'm starting to hear a lot about something called Zwift - which is supposed to take indoor training to an exciting new level by combining elements of computerized video training programs, video games, and online fitness-junkie "communities" like Strava.

The Zwift homepage calls it "Social Cycling for the Solo Cyclist."

Zwift is a turbo trainer "game" that lets riders race each other in a virtual-reality world with little animated "avatars." To access it, one needs to have some kind of turbo trainer, an ANT+ or Bluetooth speed sensor or power meter (the power meter is said to be preferential), a computer, and the downloaded Zwift application. Though any turbo trainer will work, apparently there are all kinds of "smart" turbo trainers out there that have built-in power meters and automatically variable resistance to give Zwift users a more "immersive" experience. By the way, those "smart" trainers start at about $700 and go up to $1500 or more. And Zwift has a monthly membership fee of $10. Confining oneself to the basement can get pretty expensive. 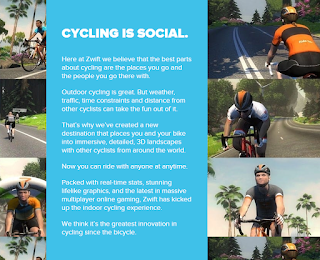 Cycling is Social - or so it says on the Zwift website. Being the Luddite Retrogrouch I am, I still find the faceless internet-based concept of "social" kind of ironic. The site goes on to say: "We believe the best parts about cycling are the places you go and the people you go there with" which sounds funnier when you remember that this is a computer app that enables a person to "ride" without leaving their own basement, and with "friends" they may never meet face-to-face.

But hey - it's much better than being outside.

"Outdoor cycling is great. But weather, traffic, time constraints and distance from other cyclists can take the fun out of it." If that's really the case, then yes, maybe they should stay indoors, riding with their computer-animated avatars.

They go on to say "it's the greatest innovation in cycling since the bicycle."

You should know I actually laughed out loud at that -- as opposed to a lame little virtual-world LOL.

As for myself, I've always hated indoor cycling (or running on a treadmill for that matter) as I can never shake the feeling that I'm like a hamster in one of those little exercise wheels. 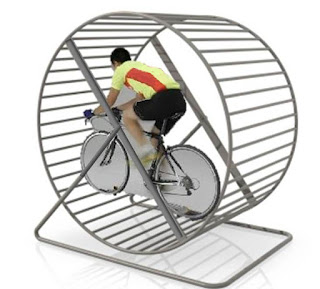 Putting on some music or turning on the TV never did much to dispel the feeling. Before I got committed to riding year-round outdoors (or as close to year-round as I can), the only indoor cycling I could even remotely stomach was riding on rollers as opposed to the stationary trainers that have become so much more common. At least one could justify the rollers on the grounds that it was great for developing a smoother pedal stroke and eliminating "nervous" bike handling habits. That, and you could never afford to zone out too much on rollers. Seriously. Some of the worst bicycle crashes I've ever suffered were in my living room.

Ultimately, though, I eventually gave up the rollers, too, as a sorry substitute for riding outside. There is something called "too cold to ride," and for me, that's about 20 degrees American. And when it's simply too cold or too nasty outside to get out on a bike, I refuse to believe there's anything wrong with taking a break, popping some popcorn, and sliding some good movies into the DVD player. If I feel the overwhelming need to do something bicycle-related, I can always re-pack hubs or true wheels while I watch Breaking Away again.
Posted by Brooks at 12:02 PM