I had a day off from work this week and took it as a good opportunity to lace together a new set of wheels. The intent of these wheels is that they be an extra special set of lightweight, high performance tubulars - like the kind of wheels I would have oohed and ahhed over when I was younger. I've mentioned some of my components in earlier posts: Campagnolo Record Hi-Lo hubs, and Mavic Monthlery Legere rims. As far as I can tell, the hubs were new-old-stock. I opened them up to pack fresh grease into them and found no signs of use on the races and cones, and the flanges don't seem to have any of typical signs of having been built before (I was told by the seller they were NOS, but it wouldn't have been the first time an eBay seller misrepresented an auction item). My rims, likewise, were unused. I selected 36 holes for the rear wheel, and 32 for the front. That made finding a matching pair of rims a little more difficult, but I eventually got what I needed. 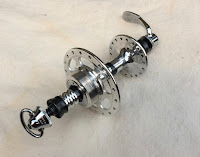 For my spokes, I've always built with DT, but this time I decided to try Sapim 14/15g butted spokes. I've heard good things about the Sapims, and they were a little less expensive than the corresponding DTs.

As always, before I start building wheels, I refresh my memory by reviewing Jobst Brandt's excellent book, The Bicycle Wheel. Sheldon Brown's article on wheelbuilding is a good reference for anyone who doesn't have a copy of Brandt's book.

When I start building, I like to gather all my tools and supplies. Truing stand, spoke wrenches, flat-bladed screwdriver - and for later, a dishing tool. Since my last wheel build, I also added a spoke tension gauge to my tool collection. I keep my spokes separated or bundled and labelled while I'm building so I don't mix them up. There are three lengths: the longest spokes are for the front wheel, the second longest go on the left side of the rear wheel, while the shortest spokes go on the drive side of the rear wheel. 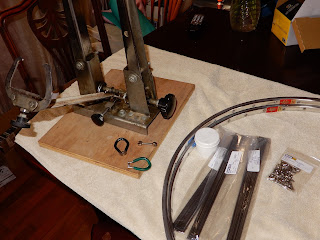 Jobst Brandt makes it pretty clear that there is no strength advantage to wheels built using the Hi-Lo rear hub, despite the folklore that surrounds them. He doesn't refer to any disadvantage except for one - that it makes inserting some of the spokes into the small flange more difficult. In a typical wheel build, spokes are either in-bound or out-bound in each flange. That is, they are either inserted from the outside of the flange, or they are inserted from the inside of the flange in an alternating pattern. When inserting the in-bound spokes through the small flange in a Hi-Lo hub, the builder has to bend or flex the spokes quite a bit so that they'll clear the large flange on the opposite side. Once that little hurdle is clear, the rest of the job is no more difficult than any other build. For the out-bound spokes on the small flange, it's pretty easy to feed them through the big oval-shaped cutaways in the large flange to get them through the small flange in a straight shot. If the large flange doesn't have those big cutaways (as on the old Phil Wood or Hi-E versions of the Hi-Lo hubs), then I have to admit it would be annoyingly difficult. It's worth mentioning that lacing spokes into the large flange is a breeze -- probably easier than with "normal" symmetrical hubs.