Old Is Good: Is It Really Just Nostalgia?

There hasn't been much here on the Retrogrouch this summer - sorry about that folks. Who'dathought there'd be less time to write, rant, and grouch during a summer break than when I'm at work full-time? Actually, being a full-time dad is even more time consuming. People who don't know that must not have kids. Most moms already know that, but they probably don't have time to read bike blogs. 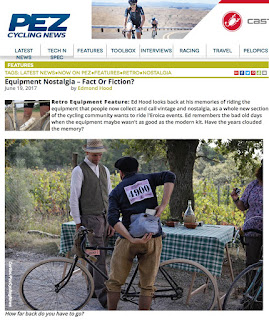 Anyhow, earlier this summer I saw an article on PezCycling News that got me thinking a bit: Equipment Nostalgia - Fact of Fiction? I finally have a quiet morning to respond.

Using the popularity of vintage-themed cycling events such as L'Eroica as a launching pad, the article goes on to rail against old componentry and to decry the love for all that old equipment as a bunch of misplaced nostalgia. Granted, the author doesn't give his age or the specific time period when he began riding/racing - but there are some hints that he's a fair bit older than I am. Even I don't have much experience with some of the stuff he ridicules. Still, on the whole, the rant seems awfully over-generalized. A lot of his rant seems to focus on stuff that was probably long in the tooth by 1970, or was bottom-of-the-ladder equipment even when it was new.

Take tires, for instance. The guy goes on to complain about how crappy tubular tires were back in his day (clinchers weren't really a "thing" on racing bikes until the '80s). But what tires does he rant against? Bottom-dwelling garbage from "behind the Iron Curtain." Barum and Wankerbar. I've heard of Barum tires - maybe even seen a few in my day (picture a cluttered old bike shop, and the grizzled old owner coming out of the basement with a pair of ancient-looking tires in his hands, saying, "If money's really tight for ya', I can let ya' have these for next-to-nuthin' but I ain't makin' no promises about 'em.") But Wankerbar? They must not have even bothered exporting them to the U.S. I even googled the brand, but came up with barely a mention.

Anyhow - this is my point - because you rode the crappiest stuff available "back in the day," all the stuff from that era is crap? Nonsense. Then, as now, there was cheap equipment, and there was expensive equipment, and everything in-between. Not everyone could afford the Clement Criterium Setas (wonderful old silk-casing tires) -- I sure as hell couldn't -- but even on my painfully limited budget (I was 18 years old when I got my first tubular wheels and tires) I was able to get some damned nice tires, and if I could still get the same tires today (and if they weren't rotted to dust) they'd rival a lot of high-end tires costing $100 or more (each!). The article mentions Dugast tires, which are the cream of the crop today - made by hand and painfully expensive - but the materials and methods used in those wonderful (and way out of my budget) tires are the same as those used in most decent tubulars of the past -- including a lot of the lower-budget ones.

The article also goes on about wheels and wheelgoods: rims, spokes, and hubs. On rims, the guy writes: "Sprint rims too were either brilliant or so soft you had to be careful when truing them or you’d pull flats in them – this was remedied by hard core wheel builders with a mallet. . . and had my buddies briefed that if they saw me with a spoke key in my hand then they should get it off me, pronto."

Ok, so were the rims bad, or did this guy simply have no skills as a wheel builder?

Again, there were some lousy rims back in the day (spokes and hubs, too) but better ones were available and didn't necessarily cost much more. The writer mentions the Mavic S.S.C. Paris-Roubaix rims as some of the good ones, and I remember those as well - so our respective timeframes must overlap a bit. The S.S.C. rims (that stood for "Special Service du Courses") were among the best rims available in the '80s and were made specially for professional racing, hence the name. They were hard anodized and stout at around 400 grams. They were also terribly expensive (if you can find them on eBay, they still are!). Thing was, however, that Mavic at the same time also offered a rim called the GP4 which was almost identical and sold for significantly less money because they didn't have that "pro peloton" marketing hype to go with them. If one were a bit more savvy and less driven by fashions, they could have saved even more money by selecting a rim called the Monthlery Pro which was basically the same rim minus the hard anodizing treatment. Yes, in the advertising they liked to tout how the hard anodizing increased the strength of the rims by however much percent - but in reality, I'm skeptical about how much actual difference it made in a completed (and properly built) wheel. Also, after only a couple of rides the hard anodizing started wearing off the sidewalls, never evenly, and ended up looking like crap. Non-anodized aluminum could always be brought back to "like new" with some fine steel wool or a bit of aluminum polish. For a few more grams and a lot fewer bucks, one could have gotten a model called the Monthlery Route, which was tough, reliable, and priced for mere mortals.

I will concede that spokes today are indeed better. Up until the '80s, one often found spokes that were chrome-plated, or galvanized (at least, I think they were galvanized - they were kind of a dull gray color), or stainless steel. Chrome ones looked nice when new, but were prone to breakage. The dull gray ones weren't pretty but may have lasted a little longer. And the stainless ones back then were a bit soft and weren't as strong as they are now. I guess the metallurgy has improved, or maybe it's the manufacturing method. But again, then or now, a properly built wheel would be a lot less likely to suffer from broken spokes.

Regarding cranks, the writer goes on to ridicule old cottered steel cranks. Again, when was he riding?  I have only limited experience with cottered cranks, and I can believe reports they could be a bit of a pain to work on (when the standard removal method involves a hammer, you do have to cringe a little) but I also have it from what I consider to be pretty reliable sources that the attachment method was at least sound and secure. In any case, there were plenty of cotterless options out there at least by the '70s, and it wasn't necessary to pay Campagnolo prices to get them.

On bottom brackets: "Bottom brackets were a nightmare, if you ventured out in the rain you had to strip them out immediately after it or the bearings and axle would be ruined – no sealed bearings back then." I'll simply say that I disagree with this as a disingenuous exaggeration.

Okay - I won't quite stop there. I do see the appeal of sealed cartridge bottom brackets (easy installation and no maintenance), but when it comes to smoothness and longevity, I'll still choose a traditional bottom bracket. Every time.

For derailleurs, the guy picks on old pull-chain, plunger-action units like this Benelux: 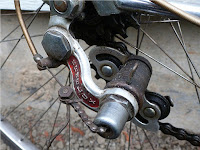 Now I know this writer has to be a lot older than I am because things like that have been obsolete since the '50s (even if some were still being made a decade later). As far back as the '60s, inexpensive derailleurs from Japan might not have had the drool factor of Campagnolo, or even the less expensive European brands like Huret or Simplex, but they worked quite well for their day.

The article continues to bash freewheels, leather saddles, center pull brakes, traditional toe-clip pedals, and more. I'm not going to address all of it except to say that I disagree, and that most of the complaints focus on the worst of what was available "back then" and apply it to everything from the era.

To sum it all up, it seems to me that a lot of this rant is based on overgeneralizations about low-budget components, second-hand junk, and an inability (or at least a dis-inclination) to perform proper maintenance.

In a half-hearted defense of the anti-nostalgia position, I'd point out that if there is something about the modern era that is better than the days-gone-by, it's that most low-budget equipment today works comparatively better than a lot of the low-budget equipment "back then." What I mean (and using ubiquitous Shimano as an example) is that most road bike shoppers today may not be able to afford Dura-Ace or even Ultegra-level components, but they can rest assured that the Tiagra or Sora-level stuff will still work pretty nicely even if it doesn't boast the same finish quality or top-tier materials. That's a good thing. "Cheap" doesn't necessarily mean "junk." That's always been true, but a buyer today need not be as savvy to distinguish the good from the bad.

On the other hand, the big downside to the modern state of bicycle components is that the constant quest to "innovate" and "improve" means that if someone is interested in keeping their bike for more than a few years (and given the cost of a bicycle today that's not a minor thing) it can be almost impossible because of the built-in obsolescence factor. With all the new "standards" and rapidly changing technology constantly being introduced, it can often be cheaper and easier to just buy a new bike than try to replace a worn out component. And of course, that's what the industry today wants you to do anyhow.

The article in PezCycling finishes by saying: "So all you ‘Vintage/Eroica/Nostalgia dudes’ out there, if it’s your thing then that’s cool – just don’t ask me to join in your enthusiasm for equipment which should belong in a landfill site."  To that I just say "fine by me." But while we "Vintage/Eroica/Nostalgia dudes" are still able to ride bikes that 30, 40, or even 50 years old - I wonder if the "Nostalgia dudes" of 2047 will still be able to ride bikes being made today.
Posted by Brooks at 11:54 AM