Well, I'm just days from wrapping up a semester at work, and I'm pleased to say that I've racked up a new personal record for bike commuting. With just three days left until Winter Break and the end of our semester, I have logged 68 days on my tally. Up until last week, I had been maintaining a bike-to-work average of 90%.

Then the snow came. 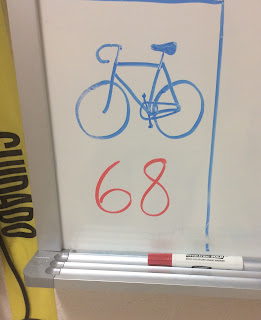 With the snow we had this past week, riding a bike would have been ill-advised, and it's a bit unclear what the next week will have in store for us. If I'm lucky, I could possibly pick up another day or two before the break, but even if I don't, 68 days would let me finish 2017 with an average of about 83%. My previous record was 63 days and 75% (two years ago), and last year I "only" had 58 days or just shy of 70%.

1,917 miles. That's how many miles I've managed between mid-August and now, riding back and forth to work. I figure that probably works out to around 63 gallons of fuel that I didn't put into my car, or somewhere in the neighborhood of $140 - $150 in fuel costs. For the full calendar year 2017, I had 118 days of bike commuting for a total of 3327 miles. Also a new personal record.

In the past year, my best month was without a doubt September. I drove only one day the entire month and had a month-long average of 95%. And I'm still really bugged about the one day I drove. I remember it because that morning looked like it would be a good one for riding, but the weather forecast was calling for an 80-90% chance of thunderstorms in the afternoon - likely to start just about the time I'd be heading home. The way I see it, rain isn't much fun to ride in, but thunderstorms are definitely a bad idea on a bicycle. It's like having a lightning rod between your legs. As it turned out, not only did we NOT get any thunderstorm that afternoon, but it didn't even rain. Nothing. Nada. Zip. So I ended up driving for no good reason on a perfectly good riding day, and the only thing I can say in defense is that if I had ridden, we would almost certainly have gotten that thunderstorm.

A handful of things helped me maintain such good numbers. One was weather. Generally our weather during the fall was pretty good this year. We've had some really cold mornings in recent weeks, but until the snow hit this week, it was always manageable.

Another thing was a slightly different attitude towards rain. I still really don't like riding in rain, and up until this year I'd been making a pretty concerted effort to avoid it. That included driving on days when the forecast called for a strong likelihood of rain in the afternoon (for me, that usually meant more than 50% chance). So, about that day I already mentioned when I drove to avoid the thunderstorm that never happened? Most previous years I'd have a lot of days like that one. What I've often found is that when I'd drive, the rain wouldn't come - or at least, it wouldn't come until I would have made it home on my bike. The thing is, I've got a bunch of rain gear packed into my saddlebag. Jacket, pants, and shoe covers. And I would end up driving because I was worried it might rain in the afternoon? This year, apart from that day calling for thunderstorms, I decided to take the risk a lot more often than not. Guess what? I got rained on a bunch. Turns out, there are lots of times when they say it's likely to rain in the afternoon, and it actually rains. Though I'm still enough of a believer in Murphy's Law to be convinced that had I driven on those days, it probably wouldn't have rained. 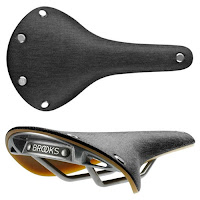 A third thing was using a bike that I don't have an emotional attachment to. Beautiful vintage steel bike with a leather saddle in a rainstorm? Makes my stomach churn just thinking about it. The non-retrogrouchy bike I've been commuting on most of this year? Meh. Rain, slush, road salt - I just don't care. I still have a comfortable Brooks saddle on it, but in this case it's one of the new-generation C-17 models with a rubber top. Promises to be more weather resistant than traditional leather. And while I'm still convinced that disc brakes offer little-to-no advantage on a road bike in good weather, I have had to admit that their effectiveness in the rain is quite reassuring. 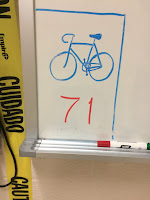 No telling how well I'll be able to keep it up through the winter. We've had two unusually mild winters in a row, so I expect we're due for a bad one this year. But I've got good numbers going into it, and am well-equipped for winter riding so we'll just have to see.

UPDATED 12/20/2017: The snow and ice we got last week started melting over the weekend, revealing our roads again, and making it possible for me to add a few more days to my commuting totals. New Record: 71 days, 2002 miles. Bike-to-work average from August through December, 86.5%
Posted by Brooks at 5:05 PM