Merry Christmas Happy Holidays Merry Jingles and All That

It's Christmas day, 30 degrees, and partly sunny in Akron, Ohio. Good day (if a bit chilly) for the annual Christmas bike ride. 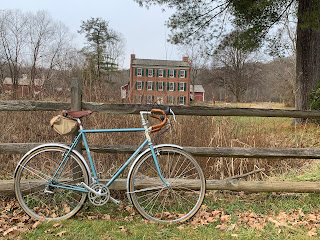 We have the in-laws coming over for my beloved pot roast today, so I didn't have time to go far. Just about 15 miles into the Cuyahoga Valley National Park and back. On my ride, I only saw one other cyclist (and not many more cars, now that I think about it). But I was bundled up well, and if anything, maybe a bit too warm by the time I was riding back home. 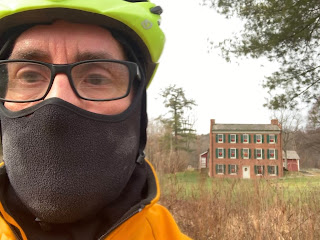 There hasn't been much on the blog lately. Partly because I just haven't had a lot of time for writing. Partly because I haven't had a lot of inspiration. Maybe things will change a bit in the coming months. I do have a couple of bike projects in the works - not for me, but for the Retro Kids, who are nearly ready for their first "adult" bikes. Believe me, they'll have some nice ones when I'm done. And I'll be sure to get something here on the blog about them.

I continued to bike to work right up to the winter break again this year, but my numbers are way down compared to last year. Some of that's due to weather (we had a lot of rain, sleet, and ice in the last couple of months), and some of that's due to after-school commitments with the kids. In any case, my average for the last 4-5 months was just below 50% - for the first time in about four years. Nothing to brag about. I don't know if it will get better this spring, either. Some months back I took a spill and suspect I may have torn the rotator cuff in my shoulder. It doesn't hurt when I ride, but I can't raise my right arm above my shoulder, and can't do anything that requires rotating the shoulder. I say, I suspect it's torn, but I won't know until I get an MRI which won't be until after the holidays. If I have to get surgery, that will probably stop my riding for a few months. If that turns out to be the case, I am NOT looking forward to that.

But enough of that for now. However you spend these next few days and coming weeks, I hope it is full of happiness.