I saw in the news this weekend that legendary rock drummer Ginger Baker has died. Though it doesn't, on the surface, seem to have much to do with a bike blog, many of us who obsess over classic and vintage bicycles know that Baker, along with musical partner and equally legendary rock guitarist Eric Clapton, was once an avid cyclist and maybe (dare I say?) a bit of a bike geek.

A few years back, I wrote about the bike connection - mostly in regards to Clapton, but also Baker - and their classic album: Cream's Disraeli Gears. I don't have anything new to post today, but it seemed appropriate to do a "Retrogrouch Re-Run" of that post. Here it is: 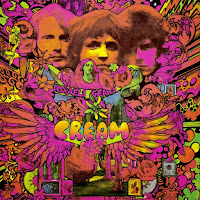 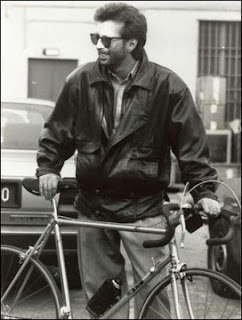 Clapton used to have a blog (it appears to be defunct at this time) where he would occasionally post some thoughts, and sometimes pictures, of his passions. Sometimes, his bikes would make the blog, like this vintage track bike:

In 2010, Clapton was pictured on the cover of a Japanese fashion magazine (with an English-language title -- Free & Easy. Gotta love it!) posing with what looks to be a '60s-vintage Cinelli. 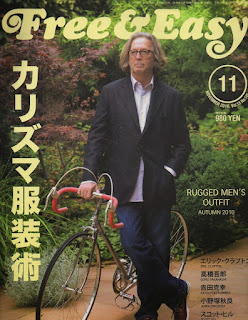