With a couple of months of anticipation building, things are starting to come together now that my vintage Specialized Sequoia frame is back from the painters.

There's something really incredible about a fresh, newly painted bike frame and a full collection of nice components to complete it. I mean, a newly painted frame even smells good. Add to that the smell of Brooks Proofide on a new leather saddle, fresh grease, and new tires, and a new bike project is a feast for the senses.
For paint, I took the frame to Franklin Frames in Newark, Ohio. The builder/painter at Franklin is Jack, and he does excellent work, and his prices are among the most reasonable in the business. The turnaround time wasn't too bad, either - it was about 6 weeks from drop off to pick up. And as an added bonus, he's located only about 2 hours away from Akron. I've had Jack do frame repairs on a couple of different frames for me in the past, and he did the beautiful burgundy paint on my Expedition a couple years ago. 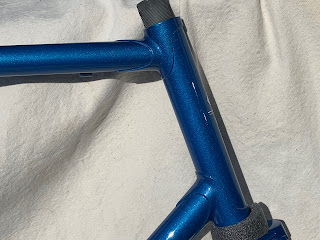 In the past, I've always boxed the frames up and shipped them, but this time I decided to skip the packing and shipping and just make the drive to Newark so I could meet up with Jack in person. That was helpful because I really liked the original color of the Sequoia and wanted get his advice and look at color samples to help us get as close as possible to the original shade. I think we got pretty close to the shade, though the new paint has a more pronounced metallic sparkle than the original, which had just a very fine, subtle metallic to it.


Apart from chipped and scratched paint, the frame was in pretty nice shape as I got it. One thing I wanted to get addressed, though, was the top tube cable guides. There was some rust under them, and even though it wasn't bad enough to make it a repair issue, I asked Jack to remove them. Fact is, those little guides, which were so popular on bikes in the '80s, are total sweat traps. I almost never find old bikes from that era where they don't have rust bubbling up around them. Same goes for the little cable clamps that were once common, if not installed with care. As an alternative, I had him braze on split cable stops to the lower side of the top tube - which I think is an improvement for durability, and also makes cable replacement easier. Some people also feel that brake feel/action is improved slightly by reducing some of the length of housing that the brake cable has to pass through (nevertheless, I don't know that I've ever noticed the difference).


Decals came from VeloCals in California (the SunTour one came from Cyclomondo, aka Greg Softley). The originals on the frame were of the "peel-n-stick" vinyl variety, which is the same thing one gets from VeloCals. Rather than have the decals put on at the painters, I opted to install them myself after getting the frame home. There's no real trick to it apart from making sure the surface is super clean, and not handling the decals too much and getting fingerprints in the adhesive. Well, you have to be careful to get them on straight, too. 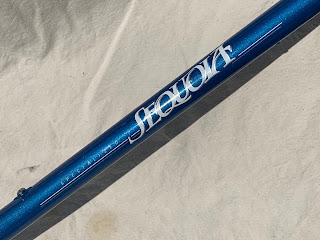 One thing I find interesting about the graphics that Specialized was using in this generation of bike frames is that they are exactly the opposite of what one finds in bike graphics today - or maybe any day. First of all, the main logo on the downtube is the model name "Sequoia," while the brand "Specialized" is in tiny font and barely noticeable. Typically (especially today), the brand name is like a billboard on the downtube, visible from half a mile away, in addition to more branding and logos on top tubes, seat tubes, and sometimes even the forks and stays. On these early '80s Specialized bikes, the graphics overall are minimally tasteful. Just a name on each side of the downtube, and a small "S" logo on the headtube.

That's what I can show for right now. There will be more, so stay tuned.