Being more or less stuck indoors "sheltering in place," there's lots of time to watch movies. As I was searching YouTube for some classic bicycling-themed movies, I happened on one that really sparked my interest: Toto' al Giro d'Italia, an Italian film from 1948. 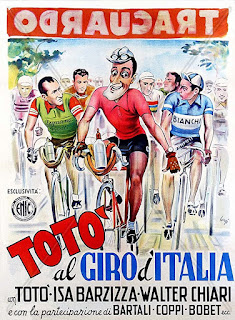 Though not well known here in the U.S., Toto' was the stage name of a popular Italian film comedian (some would rank him among that country's most popular) who made dozens of films through the 1940s and '50s. His "proper" name was (get ready for it) Antonio Griffo Focas Flavio Angelo Ducas Comneo Porfirogenito Gagliardi de Curtis di Bisanzio. Or more commonly, Antonio de Curtis. Since many of the films were showcases for his performing talents, they often featured his nickname "Toto'" in the titles. As the title of this film would suggest, Toto' al Giro d'Italia has di Curtis' Toto' character racing in the Giro d'Italia alongside many of the greatest racing cyclists of the era, including Fausto Coppi, Gino Bartali, Louison Bobet, Ferdi Kubler, Fiorenzo Magni, and more. It's a very impressive cast!

There was only one problem. The film is only available in Italian with no English subtitles. OK- so, in YouTube, it is possible to get subtitles (in Italian) - then through the settings, one can get those Italian subtitles "auto-translated" into English. Unfortunately, these "twice-translated" subtitles are only just barely better than useless. If you want to watch this film, you have to work for it!

See what I mean?

Still, between the actions and inflections and the mostly ridiculous subtitles, I was able to get enough of the gist to enjoy the film, even though I probably missed a lot of the best gags. If anyone out there wants to take a stab at the film, here's a bit of a synopsis that might help give some context.


We soon meet Toto' - or Professor Casamandrei - who is in love with the beautiful blonde Doriana (Isa Barzizza).
The professor is then determined to race the Giro, but there's a problem (well, multiple problems really, but this first one is pretty major) -- he can't ride a bike.
Discouraged at his prospects, the film takes a cue from Faust, and the professor is visited by a devil who makes him a deal: I'll help you win the Giro d'Italia if you sign your soul over to me.

The professor is won over by the demon's promises and signs the contract. Suddenly, he's able to ride like a pro.

All the great racers as well as the reporters try to figure out the secret to the professor's racing success. For instance, when they discover that the professor smokes cigars, suddenly all the racers are puffing away on cigars at the starting line.


Later in the race, with the professor holding a commanding lead, the demon reminds him of their contract, and tells him that he plans to collect as soon as the race is over (something about reading the "fine print"). Suddenly the professor doesn't want to win and starts looking for a way to get out of the deal. He tries getting arrested. Tries getting disqualified. But with the demon pulling all the strings, nothing works and his victory (and death) looks assured. I won't give away the end, but ultimately, Toto's salvation comes down to a plan cooked up by his devoted and doting mother.


It took a lot of effort, and I know I was missing a lot, but I liked this movie enough that I'd love to find a properly translated version. There are lots of copies on DVD out there, mostly from European sellers (on eBay, for instance), but it isn't clear if any of those have English subtitles, and regardless of whether they do or not, they all seem to be Region 2 discs which don't work on U.S.-market DVD players (U.S. is Region 1). I'm going to keep looking.

If you're up to the challenge (or maybe you actually speak Italian!) I'd recommend giving Toto' al Giro d'Italia a try. You can see the full movie on YouTube, or right here: