Since I planned to spend the bigger part of Sunday with my 80-yr-old father, the RetroKids and I did our traditional Fathers Day bike ride on Saturday. Our usual "go-to" for bike rides is the Ohio & Erie Canal Towpath, but this time we opted for some different scenery. The Towpath is a great biking destination, and very popular - but it isn't the only game in town. We are fortunate enough to also have a very nice trail on a converted rail line, known locally as the "Summit Bike & Hike" trail. The trail follows what was once known as the Akron, Bedford & Cleveland RR (also known as the "ABC Line") which went out of service in the 1930s, and spans the north-east quarter of Summit County, but also continues well into Cuyahoga County to the north, and Portage County to the East. It's a paved trail, well maintained, mostly flat, and a good place to ride with kids.

One of the best spots to stop and explore is Brandywine Falls. The path crosses a bridge directly over the falls, but it's a great place to get off the bikes and follow the boardwalk down into gorge. 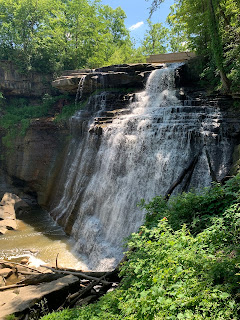 My favorite part of the trail is a few miles south of the falls, where it passes through a corridor of steep rocky ledges. The ledges are so tall, covered in mosses and ferns, and it's always noticeably darker and cooler. I don't know if it was a natural formation, or if it was blasted out to make way for the railroad (it appears to be natural - but it's almost too perfect for a rail line to assume some blasting didn't happen). Anyhow, as we ride through that mossy green cathedral, I keep expecting a Hobbit or Golem or some other Tolkien creation to make an appearance.


So that was Saturday. For Sunday, my plan was to drive up to my father's (it's about an hour's drive away) and make him dinner. But before making the drive, I got up early for a ride on my own. The forecast was for temperatures in the 90s, but it was still in the upper 60s when I left.

I took the red Mercian, which hasn't been ridden since I finished renovating the Sequoia. The Mercian's shorter wheelbase and slightly thinner tires means it doesn't have quite the ride of the Sequoia, but the handling is "snappier."

By the time I got home (after making the usual long climb out of the valley) it was already noticeably hotter outside, and I was thoroughly drenched in sweat.

That's all for now - to all the fathers out there, Happy Fathers Day.
Posted by Brooks at 10:57 AM