Long before Europeans settled the part of Northeast Ohio which is now Akron and Summit County, Native American tribes lived and moved freely about the area, using the rivers as almost a natural highway. Shawnee, Iroquois, Delaware, Wyandott, Huron, Ottawa, and Miami Indians are among the tribes believed to have traveled by canoe between the Great Lakes and the Ohio River, and from there, to the Mississippi and possibly all the way to the Gulf of Mexico.

There was one hitch, however, to making the trip entirely by canoe: there was no waterway connection from the Cuyahoga River, which flows to Lake Erie, to the Tuscarawas River, which flows to the Muskingum and Ohio Rivers. Perhaps thousands of years ago, Native Americans made an overland trail to connect the Cuyahoga and Tuscarawas Rivers -- an 8-mile stretch known today as the "Portage Trail." Today, the ends of the trail are marked by matching sculptures depicting a Native American carrying (or portaging) a canoe. One of these stands a couple miles from my home, at the edge of the valley roads I routinely bike on. 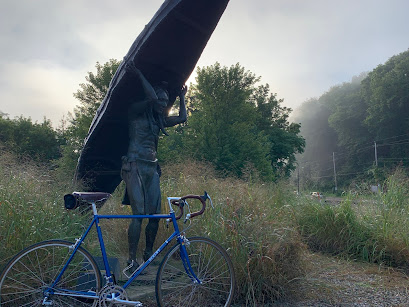 Riding through the valley the other day, just a couple miles north of the bronze Indian portaging his canoe, I had to do a version of some portaging myself. I got to a "Road Closed" sign blocking the way north along the main valley road and decided to ignore it, as I frequently do. Well, a little further up the road I found why it was closed. A huge tree had fallen over, completely blocking the road. 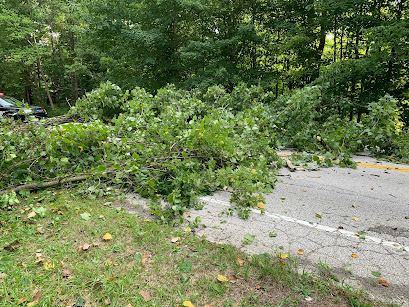 Couldn't go around it, so I just hoisted the bike up onto my shoulder and started climbing over the fallen tree. As I scrambled out of the tangle of branches with my bike, I saw a police officer on the other side, sitting in his SUV watching me. "Can't do that with a car," I told him, as I remounted my bike and rode off.

Rarely am I deterred on a bike ride from a closed road, unless I know for certain that it's truly impassable. On a bike you can almost always find a way to get through. Bridge out? I've been known to scramble down riverbanks and ravines, wade through streams, and climb back up the other side with my bike on my shoulder. Once, on a ride many miles from home, and on unfamiliar roads, I got to a bridge that was in the process of being rebuilt. Turning back and following a detour was going to add many miles to what was already a very long ride, so it was portage time. There was no roadway - just I-beam spans across a stream. Being a Sunday and no workers around, I picked up the bike and walked carefully over the spans to the other side. A bit foolhardy, perhaps, but no regrets.

I recall some years back when a major flood hit the Cuyahoga Valley. Sections of the two main roads that flank the east and west banks of the river were under water - at least a couple of feet deep in some parts. Car travel was impossible. I went for a ride the next day, and there were several stretches where I was wading knee-deep - with shoes in one hand, and bike on my shoulder. I remember one section where I could see a car stranded in the deepest part, with water half way up to the windows. Obviously some idiot thought he could make it across. On the other side I found a lady in a minivan watching me wade across the flood, and she was actively contemplating whether she should attempt to drive through. The stranded car was apparently not enough of a deterrent.

As I emerged from the water carrying my bike, she asked me "Do you think I can get through?"

"I don't know," I answered, and pointing to the bike on my shoulder, I asked "Can you do this?"

She didn't press the issue.

Being able to go where cars cannot, or ignoring signs that say "Road Closed," feels not only a bit rebellious, but also like getting a free pass, or like being part of an exclusive club, or knowing a secret handshake.

Portage-ability. Just one of many awesome things about a bike.