Covid is surging. There is a vaccine currently making its way to the highest-risk folks - but the rest of us still have a long wait. Schools are "online" again as our region has reached the "purple zone" on the state's risk-level color chart. I'm working from home, alongside the RetroKids and my RetroWife. We're all on computers in separate rooms fighting for internet bandwidth and distraction-free zones for our various Zoom meetings. 2020 is drawing to a close.

So I'm digging around through some old boxes in my basement, looking for what, I don't even remember, when I came across this:

I have no doubt that this little bike safety pamphlet is older than I am. I don't even recall where I got this nostalgic gem, but as usual, I couldn't throw it away. It's a voice from a much simpler time. In the context of our current realities, from pandemic to political, finding this felt a bit like Charlton Heston finding the statue of liberty at the end of Planet of the Apes. This faded little pamphlet is clearly evidence that our world was once a different place. 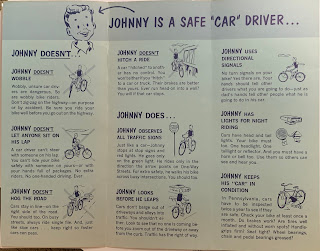 "This is Johnny's car" and "Johnny is a safe 'car' driver . . ." the pamphlet proclaims. You see, while ostensibly promoting safe bicycle riding, the true message is pretty clear. A bike is something for kids - just a step on the way to the real goal of any true-blue (and staunchly non-socialist) American - Car Ownership.
The safety advice is pretty typical for the time, which I assume to be pre-Bike Boom, and relatively benign - mostly phrased as what Johnny does or doesn't do.

Johnny Doesn't Wobble - on purpose or by accident. "Be sure you ride your bike well before you go out on the highway." Well, at least they admit he's allowed on the roads - but I'm a little surprised they encourage kids (the obvious target audience) to ride on the highways.
Johnny Doesn't Let Anyone Sit On His Lap - Ever.
Johnny Doesn't Hog the Road. "Always ride single file. And just like slow cars . . . keep right so faster cars can pass."
Johnny Doesn't Hitch a Ride. "Ever run head-on into a wall? You will if that car stops"

Johnny Observes All Traffic Signs. "For extra safety, he walks his bike across busy intersections. You should too." A bike is "equal" to a car -- but don't go getting any ideas now.
Johnny Looks Before He Leaps. "Cars don't barge out of driveways and alleys into traffic. You shouldn't either." (except when they DO!).
Johnny Uses Directional Signals. That's nice -- I encounter a lot of drivers who don't.
Johnny Has Lights for Night Riding. "And a horn or bell, too." Funny thing, when the CPSC started regulating bikes in the 1970s, they specifically decided NOT to require lights. But yes - definitely use them.

Now there's something I can definitely get behind. I'm convinced that people who routinely ride with traffic are generally more observant and better able to predict the behavior of other road users. I sometimes describe it as "Spidey Sense" - and it comes from knowing how badly most drivers drive, and how clueless (or even aggressive) they can be when it comes to cyclists. I also recognize how much that carries over when I'm in my car.

The pamphlet also explains that according to state law (Pennsylvania, in this case) a bike and a car are the same - and subject to the same rules. Good to know as a cyclist - but it's something that probably bears repeating to drivers more. Equal in the eyes of the law - but the real problem to us as riders is getting drivers to recognize our rights - or even to respect us at all. Especially when their attention is compromised by that addictive attention-sucking cell phone. But then again - such things were the stuff of science fiction when this pamphlet was published.

In that same box, I found a few other old pamphlets with similar, and sometimes dated, safety advice.

The Bike Riders Rules for Safety from Employers Mutuals (sounds like an insurance company to me) suggests that kids only ride on streets where traffic is light, dismount and walk at intersections, always pull over to allow cars to pass, and (oddly, if you ask me) always park your bike on the sidewalk. 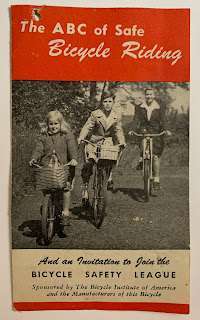 The ABC of Safe Bicycle Riding from the Bicycle Safety League looks to me like something that would have been hanging from the handlebars on a new bike in the early '50s. 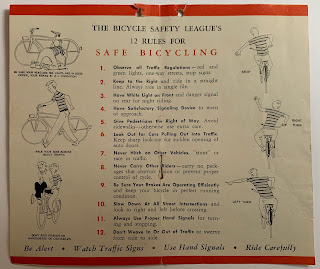 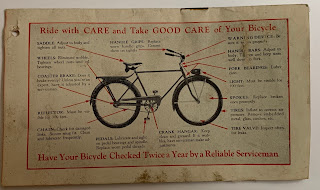 There was another one that was more like a little handbook than a pamphlet: Fun on Wheels from The Insurance Office. 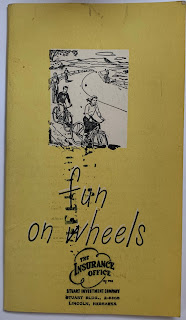 This one has so much to it I may have to save it for another post. But it all begs the question, where the heck (and when, and why?) did I get all these things?