As if to prove that keeping a "keeper of the flame" classic steel bike business alive in a carbon-fiber world is no easy feat (complicated further by our current pandemic realities), we have seen the Leeds, England-based Bob Jackson Cycles die, get resurrected, and die again all in the space of about 3 months.

After announcing last October that the 85-year-old company would be closing its doors by the end of 2020, it was then announced the following month that the company had secured some new investment and new blood, and was poised for another 85 years. Visitors to the site would have been pleased to find this announcement on the homepage in November:

Well then, apparently whatever deals or arrangements that were being made to keep the brand alive must have fallen through. By the first week of January, the message was "We are ceasing trading with immediate affect." 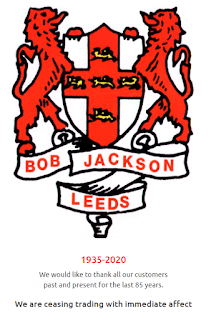 WAIT - BACK ON AGAIN?:
It seems, however, the brand may not be entirely finished after all. Though I haven't seen anything posted on other sites, it was recently announced by Kevin Sayles, the Master Framebuilder at Woodrup Cycles (which, like BJ, is located in Leeds, England), that the rights to the Bob Jackson brand, along with some of the old shop's tooling and materials, have been purchased by Woodrup. Frames built by Woodrup, but badged as Bob Jacksons, may soon be available. Exactly how that arrangement will work has yet to be announced, but if true, the brand is in good hands. Woodrup has been in business since 1949, and still has a full-service bike shop. Their hand-built "bespoke" frames are beautifully made and have an excellent reputation. For Sayles, the arrangement brings him around full circle in a sense -- he was a builder at Bob Jackson early in his building career back in the 1970s.

Like I said, there seems to be little information anywhere else about the arrangement - it's not even on the Woodrup website yet - and to the best of my knowledge, details about starting production, pricing, ordering, or anything else haven't been determined yet. I guess that makes this is one of those "Watch This Space" kind of announcements.

In the meantime - I suggest visiting the Woodrup website and drool over some of their handiwork.

UPDATE: 1/27/21 - more info just came up on CyclingWeekly. The new Bob Jackson will be run as a separate company from Woodrup, with a goal of getting production going in about 6 months time. The plan is to have a new website where people will be able to order frames - and have a renovated workshop in Leeds (separate from the Woodrup shop) where the frames will be built. Here's a link to the news from Cycling Weekly.