Now that you've been convinced to get yourself a "Gravel" bike to replace your "Cyclocross" bike (which was totally unsuited for riding on gravel, you know) there's another new bike you have to add to your stable. Are you ready for "All-Road" bikes?

I'm not sure I know exactly how an All-Road bike differs from the Gravel bikes of last year, or how those Gravel bikes were so different from Cyclocross bikes before them. But if the new Cannondale Slate is an indication, I suppose the difference is that it should have a suspension fork (?). Yep. Riding on unpaved roads now requires suspension forks. Or at least, I think that's the implication here. And once people become convinced that a road bike needs suspension forks, it's only a matter of time before full-suspension becomes the "next big thing" for the road.


Call me skeptical. I mean, I'm not even convinced suspension is needed on most mountain bikes for cryin' out loud. That doesn't stop people from looking at my early '80s vintage Stumpjumper and saying "Cool bike! Too bad it doesn't have suspension!" But built up with mustache bars and semi-slick tires, it seems to have the ability to handle just about any kind of road surface, paved or otherwise, and a lot of off-road trails, too.

The Cannondale Slate is generating a lot of buzz with its 650B wheels and its "Lefty" single-sided suspension fork with 30mm of travel. The company released a video of the new bike featuring cyclocross racer Tim Johnson. They declare the bike to be a "whole new type of bike" that's not about racing. The video then goes on to show the bike being ridden . . . well. . . like a race bike. It's also "much more capable" the project director declares. Well - yeah - it can go places a narrowly focused race bike can't go. But there are lots of bikes already available that can do the same thing. If you're reading this blog, you probably already have one. They're not exactly new. 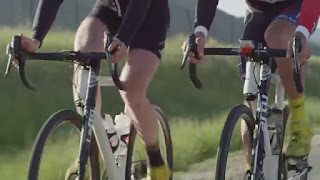 Don't get me wrong - I love the fact that people are getting excited about bikes that can fit fatter tires and handle the rough stuff. But there's more to being "much more capable" than having fatter tires and being able to ride on unpaved roads. Can the bike accommodate fenders? I don't think the Slate can. Unpaved roads get pretty nasty when it rains, though. Can it handle racks? I don't think the Slate can do that, either. But there are lots of bikes that can handle nimbly on the road, and still let a person explore the unpaved wonders -- and even keep the rider reasonably dry, comfortable, and unburdened.

When I first got into bikes, touring bikes were all the rage. They were meant mostly for paved adventures, but were capable of much more. A lot of lightly-used vintage examples are still out there, available for next to nothing. Updated with newer wheels and tires (in some cases, they can be converted easily to 650B) and they can become even more versatile. The ability to accommodate large-volume tires isn't new, either -- it's just that people kind of forgot about it as road bikes became more and more focused on racing (despite the fact that few people actually race). Funny thing, I have a 1973 Mercian Superlight that is currently shod with 32 mm tires, and it still has tons of clearance -- and that was a high-end racing bike in its day! Bikes with decent tire clearance have long been out there, but until recently, they weren't the bikes getting all the attention.

All-Road bikes. The latest "must have" market segment, in a market that keeps getting sliced narrower and narrower. Enjoy them while you can -- before the industry moves on to the next big thing.
Posted by Brooks at 8:22 AM