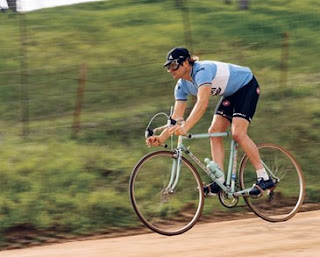 I'm guessing that any fan of vintage and classic bicycles is familiar with the L'Eroica ride events. Having begun in Italy, participating riders mount vintage bicycles (pre-1987, according to the rules) and ride over the white roads of Italian wine country. L'Eroica is a celebration of classic bikes, good wine and food, and all things Italian.

Back in April, Bianchi announced that they would be releasing a new vintage-inspired bicycle  model in honor of their global sponsorship of the L'Eroica events. The L'Eroica rides have expanded to include rides in the US, Japan, Spain, and the UK, in addition to the original Italian event.

According to the Bianchi press release, the new L'Eroica model would be made in Italy, have a custom build kit including Campagnolo components and a Brooks leather saddle, and would be certified by the L'Eroica commission for use in any of their events. I know there was a lot of speculation, and even some skepticism about what the new model would be like among vintage bike enthusiasts.

In the Classicrendezvous group for instance, some wondered if it was just going to be a complete bike built around the company's Tipo Corsa steel frame set. At first glance, that might seem like a decent plan -- though sharp-eyed critics would note that, while the Tipo Corsa frame is lugged steel and has a vintage-inspired paint scheme, it has a rather unfortunate-looking "dog-leg" of a fork rake, and is likely made somewhere in Asia -- not Italy. It gets close to the mark for some. Falls short for others.

Well, at long last, this past weekend at the L'Eroica Brittania, participants in that event got what may have been (at least to my knowledge) the first public glimpses of the new model. Wesley Hatakeyama, of the California L'Eroica event, was there at the UK ride and snapped a few pictures at the Bianchi tent (thanks for sharing, Wes!). Some will be thrilled at what they see. Others may be slightly let down. But let's take a look at the new bike.

It appears that when the folks at Bianchi announced that the bike would be built with Campagnolo components, they only meant the derailleurs. Then again, I wondered how they were going to get modern Campy to fit the L'Eroica rules. Most of the other components seem to be made by Dia Compe -- which to somebody like me is fine. The parts are well made and look good. But if somebody was hoping for a full-Campagnolo bike to accommodate the rules of a vintage bike ride, they were maybe being a bit unrealistic.

So, what are the rules?

Here are some relevant points: "Historical Bikes (also called Bici Eroiche, in Italian) are all road racing bikes built in 1987 or earlier . . . These bicycles most likely have a steel frame . . . must have shift levers on the down tube of the frame; exceptions include pre-1980 non indexed bar-end gear shifters and rod/hand manual operated front derailleurs . . . pedals should be with toe clips and straps . . . the brake cables must pass outside and over the handlebars . . . wheels must have at least 32 spokes laced to a low profile rim (20 mm depth or less, except for the wood rims); the rims must be of either steel, aluminum or wood . . . both tubular tyres and clinchers with inner tubes are allowed . . . we invite participants to fit saddles from the same period of the bicycles, so a model of 1987 or earlier, or a vintage model of modern production such as Brooks leather saddles, Cinelli replicas, San Marco, etc."

And this section deals particularly with the acceptance of newer bikes made with a vintage style:


"Vintage-Looking Bikes with steel frame from new or recent construction with vintage look and characteristics may be used only if they are road racing bikes assembled using vintage components or replicated parts similar to the original as described above. In particular if the bikes are inspired by the design of road racing bicycles of the 1970’s and 1980’s, they must comply with rules a), b), and c) above, regarding shift levers, toe clips and straps, and brake cables."

Notice that it doesn't mention anything about the number of gears on the rear wheel.

I haven't seen anything about a price for the new bike. Even Bianchi's website doesn't have pictures of the bike or any further information about it. (I don't know if anybody out there has as much information as what you're getting right here right now!). The quality of the frame is probably very good, and while some may be disappointed at the component choices, it seems to me that they are of high quality, and should help keep the price reasonable. Now we just have to get the official word from Bianchi.
Posted by Brooks at 11:05 AM