Bicycles at the Smithsonian

There's a new exhibit at the Smithsonian's National Museum of American History called The Object Project which looks at the historical importance of various consumer products as markers of societal shifts. The exhibit explores the interplay between the consumers, the inventors, the manufacturers, and even the marketers, and how certain products changed our way of life. Some products have a "ripple effect" that spreads their impact far beyond the inventor's original intentions. Among the highlights in the exhibit is the bicycle, which gave birth to countless innovations and improvements that we now take for granted. 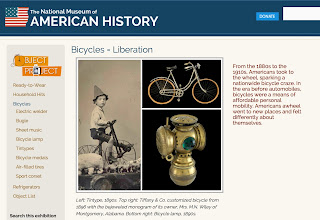 Consider the role that the bicycle played in manufacturing -- like the parts standardization that laid the groundwork for the mass-production assembly lines, electric welding, lightweight steel tubing, ball bearings, chain drives, and of course pneumatic tires. Consider the role that early bicyclists played in the paving of our roads and increasing people's mobility. Or the role that bicycling played in women's liberation - or to the liberation of all people to travel longer distances swiftly and efficiently.

While not everyone will be traveling to Washington to view the exhibit, one can see some highlights on the museum's website (HERE). It's worth taking a look.

If you're interested in more, click on over to the National Museum site, follow some of the links to companion essays, and check out the New York Times piece. It's all a cool look through bicycling history.
Posted by Brooks at 11:22 AM