I had a question recently from a reader that led to some interesting investigation. He had a bike, a 1980s Superia, with a tubing sticker he hadn't seen before and wanted to know more about it. I've run some posts about bicycle frame tubing before - like Reynolds, Columbus, Tange, and Ishiwata, and I'm familiar with others such as Vitus, but I'd never seen this sticker before.


With its black, gold, and green colors, and the "Guaranteed Built With . . ." slogan, it is obviously a knockoff of the famous Reynolds stickers from the classic era. I shared the photo and the question with friends in the Classic Rendezvous group - but unfortunately, other than some mild outrage at the attempt to capitalize on the familiar Reynolds logo, nobody seemed to know this tubing.

I started by looking into the Superia brand. One doesn't see these here in the U.S. that often, but they were (maybe still are?) a Belgian brand. In fact, Eddy Merckx rode for the Superia team at the beginning of his career with Rik Van Looy. The company made a range of models, including some decent racing bikes, though it's unlikely that the bikes ridden by Merckx and the rest of the team were actually built by the company. More likely they were built by a specialist shop (I've read that it was Masi), and painted with the sponsor's colors and decals. Such was common practice in those days.

Looking at the Classic Rendezvous site, there wasn't a lot of info about the Superia brand, but I found that the company was founded by Remi Claeys, and that they made welded (think "seamed") steel tubing in addition to bicycles.

Back to the sticker: At first look, I thought the sticker said "R.O." frame tubes, but looking closer, it appears to be "R.C." R.C.? Remi Claeys? No confirmation for it, but I think that's the key. I became convinced that this was in-house tubing, probably seamed, made by Superia for their lower-cost bicycles. Notice that the sticker also doesn't mention "butted" tubing. Almost certainly straight gauge. "Bonderized"? That's apparently a surface treatment that inhibits rust, similar to, and sometimes used in conjunction with galvanizing.

I haven't gotten any solid information to tell me I'm wrong in my assessment - so that's the story on that one, for now.

The question about that tubing sticker got me thinking about other "knockoffs" of the Reynolds brand -- like this one:
The interesting thing about the Raleigh 555 is that it probably fooled a lot of people into thinking their bikes were built with Reynolds tubing. In fact, there are many people who believe that the tubing actually was Reynolds, only re-branded. I for one don't actually believe that to be the case. Read on.

The thing is, fans of vintage bikes are probably well aware that most higher-end Raleigh bikes in the '60s and '70s were built with Reynolds tubing - usually some version of 531. Keep in mind that at that time Raleigh Bicycles and Reynolds Tubing were divisions of the same company (which also owned Brooks Saddles and Sturmey-Archer for a time). In 1982, TI-Raleigh divested itself of their U.S. operations and sold the U.S. rights to the Raleigh name to Huffy. Raleigh USA was born. Most of the Raleigh USA bikes, though, were built in Japan (many of them by Bridgestone, which also made bikes for Schwinn). These were the bikes that typically bore the "Raleigh 555" tubing labels.

I really believe the Japanese origin to be more likely. Think about it. If Raleigh USA was using Reynolds tubing in their bicycles, why would they bother re-branding it? They obviously knew of the cache that the Reynolds label brings to a bike or else they wouldn't have copied the label so faithfully. On the other hand, there are countless examples of Japanese bicycle manufacturers re-branding tube sets made by Tange and Ishiwata. Fuji's Valite tubing, for example, was made by Ishiwata.

The way I figure it, Raleigh USA was having their bikes built in Japan - that much is certain. They probably sourced their tubing from Japan too. It only makes sense. But knowing how closely British Raleighs were linked with Reynolds tubing -- not just as corporate siblings, but also in the minds of many consumers -- they wanted a label that at first glance would reassure buyers, and give them that prestige. Could I be wrong? Sure. But that's the explanation that makes the most sense to me.

Anyhow, there are other "knockoffs" of the famous Reynolds logo - some with a bit of tongue-in-cheek humor. Like this one - "Guaranteed Not Built With. . .": 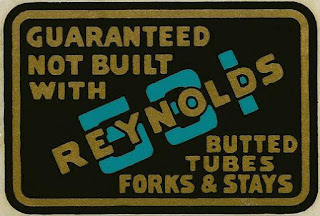 Some just avoid the whole branding nonsense altogether, like this sticker from framebuilder Vincent Dominguez:
And then there's this one, that I'm kind of partial to: 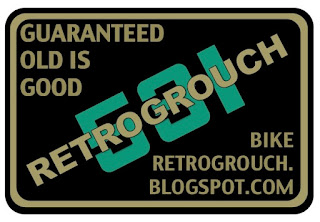