I've long been a fan of the stories and illustrations of Edward Gorey. His style, which is often described as Gothic -- but almost absurdly so -- usually has a dark sense of humor, and his hapless characters often meet disturbing ends. Perhaps it shouldn't be surprising that his illustrations found their way into the opening credits of the program Mystery! on PBS.

Edward Gorey did illustrations for a number of books and authors, but also wrote and illustrated more than 100 books of his own -- books that, at first glance, might take the form of children's books (and I assume that children might enjoy some of them, if the books didn't give them nightmares), but are probably intended more for adults with a taste for the farcical or macabre.

The visual settings for his works are ostensibly Victorian or Edwardian (that's the period from about 1900 up to the beginning of WWI) and it shouldn't be a surprise that bicycles have found their way into a lot of his illustrations. I don't know that Gorey was a particularly avid cyclist or anything (in fact, some of his bicycle drawings would almost indicate otherwise) but they probably fit a sense of the setting he was portraying.

I recently picked up copies of two of Gorey's bicycle-themed books: a first edition copy of The Broken Spoke (1976) and a second edition of The Epiplectic Bicycle (1969).

The Epiplectic Bicycle is an absurd story of two poorly behaved siblings, Embley and Yewbert, who get taken for ride by a bicycle with a mind of its own. A lot of people probably mis-read the title as "Epileptic" -- but it is, in fact, "Epi-PLEC-tic" which comes from the word "epiplexis" which is a type of rhetorical question one asks "in order to chide, express grief, or inveigh." (yeah, I'm getting all English-Major-y, right?)


The story begins on "the day after Tuesday and the day before Wednesday" when the siblings Embley and Yewbert are engaged in "hitting one another with croquet mallets." They pause in their battle when a riderless bicycle rolls into view.

After fighting each other to exhaustion attempting to take sole possession of the bicycle, they climb onto the bicycle together, only to be taken for an unforgettable journey. 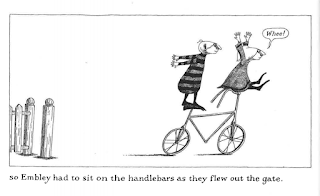 They encounter dangers and mishaps, are nearly killed more than once . . . 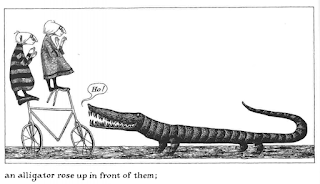 before eventually returning home to find a strange and inexplicable surprise (sorry, I won't reveal it here).

I found a short stop-motion animated film version of The Epiplectic Bicycle, made by Lauren Horoszewski, an MFA student at the University of Connecticut. It's on Vimeo and I can't seem to embed the video here, but the screenshot below should serve as a link to the site. The look of the film captures, in puppets, some of Gorey's original style. 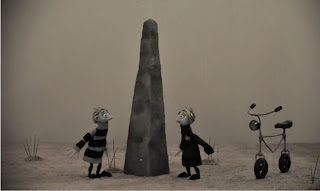 The other book I recently acquired is The Broken Spoke, which is not so much a story, but a collection of "cycling cards" - each about the size of a postcard. I have a sampling of some of the images below:

The Broken Spoke is out of print, but used copies can be found without too much difficulty. The Epiplectic Bicycle was re-printed not too terribly long ago and new copies may still be available - or again, used copies are out there. Both books are contained in the anthology Amphigorey Also, which is still available through Amazon and most other booksellers. Check them out if you get a chance.
Posted by Brooks at 12:20 PM