Oval or elliptical chainrings seem to be back with a vengeance, don't they?

I remember seeing ads in old issues of Bicycling magazine from the '70s for the Durham elliptical chainrings, though they were hardly the first of their type (such things were described at least as early as 1896). And they wouldn't be the last.


Remember Shimano BioPace? Heck, even people who didn't ride in the '80s remember BioPace. The shape was more complex than the simple ellipse of earlier attempts at un-round chainrings, but the promises were similar. Shimano pushed those things hard -- especially for mountain bikes and touring, and later even for racing bikes (with a less-radical -- that is, more round -- silhouette). And they had a lot of proponents. Lon Haldeman used them. Even Sheldon Brown seemed convinced they were worthwhile.

Other companies, like SR and Sugino, made their own versions of them. But in the end, despite all their market-dominating power, even Shimano could not make BioPace last beyond the decade. Now they're viewed like other 80s fads - like Rubik's Cubes, and Flock of Seagulls haircuts: the punchline to some age-based joke.
In the last couple of years, though, it seems that oval, or elliptical, or whatever marketing name people come up with for un-round chainrings (BioPace was technically called a "point symmetric egg curve") -- whatever people are calling them, they're baaack.

Look at some of the current brands:


Absolute Black recently put out a video to explain why their un-round rings are so effective, and how they are not the same as BioPace.


The video is approximately 18 minutes of this guy sitting at his desk . . . 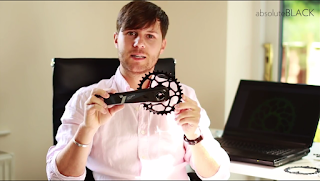 . . . explaining to us why Absolute Black oval chainrings are NOT the same as BioPace.

You could attempt to sit through the entire 18-minute video, but if you'd like the quick and dirty summary, it goes something like this:

And if you still are unclear, just remember, these are different from BioPace chainrings. Just look for yourself:
There. Got it?

Now, if you're hoping for some computer-modelled comparisons to demonstrate their effectiveness, or some measurable data, or anything even remotely provable, well, you might be disappointed. Just keep in mind that there don't seem to be any independent studies that can say conclusively that un-round chainrings make any real difference. By most measurable data, they come out pretty much the same. Keep in mind that a 42 x 16 gear combination gives a person about a 70-inch gear (it will vary a little with tire size, etc.) whether the chainring is round or oval. In other words, one crank revolution will propel the bike forward the same distance. From most of what I've read (like THIS, or THIS, or THIS) even power meter data on the subject can be inconclusive.

On the other hand, it's worth pointing out that the "placebo effect" is a scientifically accepted phenomenon. I'm inclined to think that any difference felt between round and un-round chainrings is more psychological than anything else. If one could somehow come up with a way to do a double-blind test, to configure a modern road bike with a completely hidden crank -- like with some kind of fully-enclosed chain case -- and study people's perceptions, I fully imagine that most riders would be hard-pressed to tell the difference. If the test subjects believe that the rings make a difference, and if they believe they're riding a bike with the rings, then many of them will believe they can feel the difference even if it turns out that they're actually riding on normal round chainrings. It's just a hunch, but if anyone actually conducts such a study (or if one has already been done), I'd love to see the results.
Posted by Brooks at 12:34 PM