Again With The Solid Tires? Really? 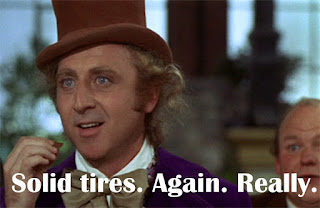 Two years ago I wrote that we appear to be in the midst of a flurry of airless tire "innovations," all of them apparently hoping nobody will notice that such things have been tried almost since forever, and never catch on for some very good reasons.

The two latest entries into the solid-tire death match apparently come from the same creators, even though they have totally different designs. One is the NEXO Tire, and the other is the Ever Tire. The NEXO Tire is designed to fit onto existing rims, while the Ever Tire is sold as a complete wheel package. Both systems have been rolled into one Kickstarter campaign.

The creators of course seem pretty excited about their innovations. From the Kickstarter ad: "What happens when you mix the A-Team, Batman and Uni-Kitty's magic horn? We don’t know either but we’re pretty sure they hate flat tires too. . . While trying not to overstate the awesomeness of our discoveries, we think we’re offering two solutions that rival the innovation of toilet paper (well… pretty close)."

Apparently aware that solid rubber tires have been done to death, the creators of NEXO tires would like to convince us that their tires are different - and not truly even solid. And not actually rubber, either.

You see, the tires are molded in one piece from a "macromolecular material" which sounds to me like some kind of polymer foam. In fact, that's exactly what it is - and the distinction between a silicone polymer foam and foam rubber is what chemistry textbooks are for.

Then there are the Ever Tires. These ones do seem to be made with a different material than the NEXO tires - a solid material that has large holes molded into the structure to give the tires some semblance of "spring." The Ever Tires are apparently installed onto the rim at the factory, and therefore are only available as a complete wheel system, so if you wear out an Ever Tire, I suppose that means you have to replace the whole wheel. But don't worry. The company claims the tires will last at least 5,000 miles, and while some of us probably ride that many miles in a single year, I doubt anyone who would buy the Ever Tires will put that many miles on their bike in a lifetime.

They are available in a variety of sizes for different types of bikes.

Q: What kind of bike can I put the Ever Tires on?
A: You can put lipstick on a cat but that doesn't make it pretty. While you can put our tires on any bike these tires are not for the elitist. Avid mountain bikers or those looking for added cushion may find that while these tires are great at avoiding flats they are still not as soft as an air filled tire.

That's a ringing endorsement. And you can "put lipstick on a cat but that doesn't make it pretty?" What the hell is that even supposed to mean?

Q: Do Ever Tires handle differently than a regular tire?
A: In our testing we've found that most people can't tell a difference at all. If you're a serious road biker then these are not the tires for you. They run stiffer than your typical air filled tires.

So who are these testers who "can't tell a difference at all" when they're riding on these solid dead treads? Not "elitists," that's for sure.

Would they be good for commuters? Maybe if they don't get caught in the rain. The makers say, "We strongly recommend that when riding in wet conditions especially when cornering that you slow down." In other words, whatever rubber or polymer material these are molded from doesn't have such good grip on wet roads.

The makers also acknowledge that, like all other airless tires, these have more rolling resistance - but they point out multiple times that only an "elitist" would notice.

Not for "elitists," road cyclists, mountain bikers, commuters who get caught in the rain. Not for anyone capable of noticing a harsh ride or who values "cushioning." All in all, these are probably the perfect tires for that bike that dwells in basement or garage its whole lifetime.
Posted by Brooks at 12:54 PM