In the late 1880s, shortly after the invention of the bicycle as we know it, with its chain drive and wheels of roughly equal size, John Boyd Dunlop invented the pneumatic tire -- which (Saint) Sheldon Brown once referred to as "probably the most revolutionary and important invention to come out of the bicycle industry." Ever since then, for the past 125 years or so, solid or airless tires for bicycles, motorcycles, cars, and more, have essentially been rendered obsolete. That doesn't stop people from trying to revive them every couple of decades, though. 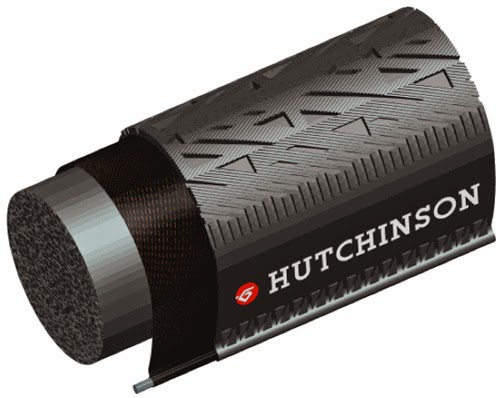 Right now, we seem to be in another one of those periods where a flurry of startups and "innovators" are convinced they have finally found the ultimate improvement on the pneumatic tire -- and they'd like to convince us, too.

A couple of years ago, the well-known Hutchinson brand came out with its Serenity line of airless tires. These are actually a relatively normal tough-casing "urban" clincher tire with a closed-cell "foam" rubber insert that replaces the typical inner tube. The tire is claimed to offer a ride similar to that of a "normal" tire inflated to about 60psi (more or less, depending on which sources one believes). The company also claims a life expectancy of about 8000 miles, which makes me wonder what kind of tread compound and thickness they're using, but that's neither here nor there. I find it more notable that the tires are significantly heavier than comparable pneumatic versions, and while I haven't seen any specific test results on their rolling resistance, I've read several "first impressions" that speak of them as feeling more sluggish than "normal" tires. Jan Heine, when are you going to do a head-to-head comparison between these new solid tires and your old-fashioned, retro-grouchy pneumatic tires? 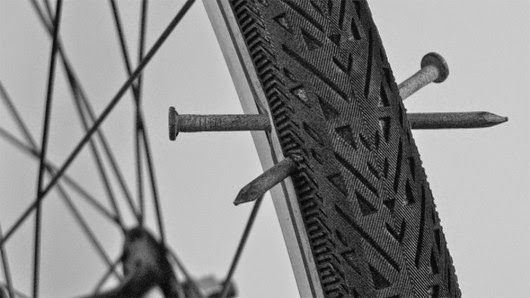 The Serenity tires spawned a Kickstarter campaign back in the spring, too, as the @cme Flat Free Wheels. The idea came about because the airless tires are so notoriously difficult to install, that @cme's founder, Steve Boehmke, decided to offer the tires pre-mounted to wheelsets that people could buy, ready-to-ride. I pointed out in an April Retrogrouch post that I thought it was a little disingenuous that the @cme Kickstarter promotion made it sound almost as though they had invented the airless tires, rather than just mounting them to pre-built wheels, which is something any decent bike shop should be able to do for a person.

Another, more recent entry to the solid tire fray comes from Tannus Tires of Korea. Rather than being a foam insert like the Hutchinson Serenity, the Tannus tires are fully molded polymer foam tires that the company claims will "compete with" regular pneumatic tires. Tannus also offers their airless tires in "various funky colors" (that's right off their website, tannus.co.uk). They come in "soft" and "hard" formulations, to imitate pneumatic tire pressures of roughly 90 psi and 110 psi respectively. They have recently been introduced in the U.K., though I'm still waiting (nahhh, not really) to see if they're coming to the U.S.A. Tannus has big plans for them, hoping to eventually get their tires into the Tour de France. Yeah, that's likely to happen.

In order to keep the molded tires from rolling off the rim, the company has devised a mounting system that utilizes little plastic pins placed every couple of inches around the tire's "bead." Those pins snap into place under the hook edges of the clincher rim. Having exactly the right rim dimensions is important. Tannus has videos on their site showing how "easy" installation and removal are supposed to be. How easy? So easy that they have the following disclaimer: "It is not recommended for consumers to mount them by themselves. Please inquire your local retail store for installation."

Thankfully, one shouldn't need to do this on the road. Sheeesh.

There was another flurry of activity in airless tires back in the early 80s. I dug out the old magazine archives and found an article in the June 1983 Bicycling about a bunch of airless tires and tubes that were making the same kinds of claims being made today by these newer entries. The products tested included airless tubes with names like No-Mor Flats, and the Eliminator. No-Mor Flats was like an extra-thick-walled inner tube (not pressurized, however) with a hollow core. The Eliminator was a stiff, hollow core elastomer. Testers found them difficult to install, requiring extra levers and plenty of strength. No-Mor Flats was several times heavier than a normal tire, while the Eliminator was "only" a little more than double the weight. There were also airless tubes and tires from Zeus LCM that sounded pretty similar to the Hutchinson and Tannus tire systems of today, with their closed-cell polyurethane foam construction. Again, testers found them to be heavy and a pain to install.

Worse than weight and installation difficulties, these airless tubes and tires had a much harsher ride, and considerably more rolling resistance than pneumatic tires. While I mentioned that I haven't seen any detailed comparisons with the latest market entries, the Bicycling tests in 1983 showed that the "best" of the airless systems at the time, the Zeus airless tire, only rolled about 60% as far as a comparable inflatable tire. The worst of the systems only rolled about 30% as far as the comparable pneumatic tire. Considering that the newer systems don't seem to be significantly different from the early 80s offerings, I have a hard time imagining that any of these new offerings today would be serious improvements.

Again, I turn to Sheldon Brown: "Airless tires have been obsolete for over a century, but crackpot 'inventors' keep trying to bring them back. They are heavy, slow, and give a harsh ride. They are also likely to cause wheel damage due to their poor cushioning ability. A pneumatic tire uses all of the air in the whole tube as a shock absorber, while foam-type 'airless' tires/tubes only use the air in the immediate area of impact. . . My advice is to avoid this long-obsolete system."  Brown wrote that at least fifteen years ago, but I am certain it is no less true today.

Although the makers of some of these new airless tires would like us to think they've created the breakthrough that will make traditional pneumatic tires obsolete, I doubt they will be any more successful than previous attempts. Don't expect to be getting rid of your tire pumps any time soon.
Posted by Brooks at 7:19 AM