Last week I looked at the COBI "connected" bike system, which is supposed to integrate your whole ride experience through your smart phone, making all your rides so much more rewarding and enjoyable. Of course, we all know how hard it is to enjoy a ride without obsessing over data, or being able to share it immediately on social media. But having to read all that data on the small screen of a smart phone (which I've always found impossible to see in bright daylight, anyhow) is so hopelessly retro, and not in the cool, ironic way. Fear not. Now you can go the full Geordi La Forge and get the Recon Jet heads-up display goggles:

Taking the concept of the Google glasses and applying it to cycling eyewear, the Recon Jet glasses connect wirelessly to all your bike's various sensors, and projects a display image in front of the rider's eyes with all the data anyone could ever desire (in other words, far more data than anyone really needs).
Recon Instruments touts the Jet glasses as "the world's most advanced wearable computer." The on-board computer boasts a dual core CPU as well as GPS with built-in gyroscope, accelerometer, magnetometer, altimeter, and thermometer. The goggles also incorporate WiFi, Bluetooth, and Ant+ connectivity for smartphones, heart rate monitors, power meters, and all the other crap people feel compelled to strap onto their bodies and bikes. On top of it all, they of course have a built in HD camera with microphone so that people can capture every moment of their ride to be shared instantly on social media. Don't let me forget the most important feature of all, which is the heads-up display, which projects a virtual image in front of the rider's eyes. Recon claims that the image appears virtually as a wide screen 30-in. HD display at 7 feet. 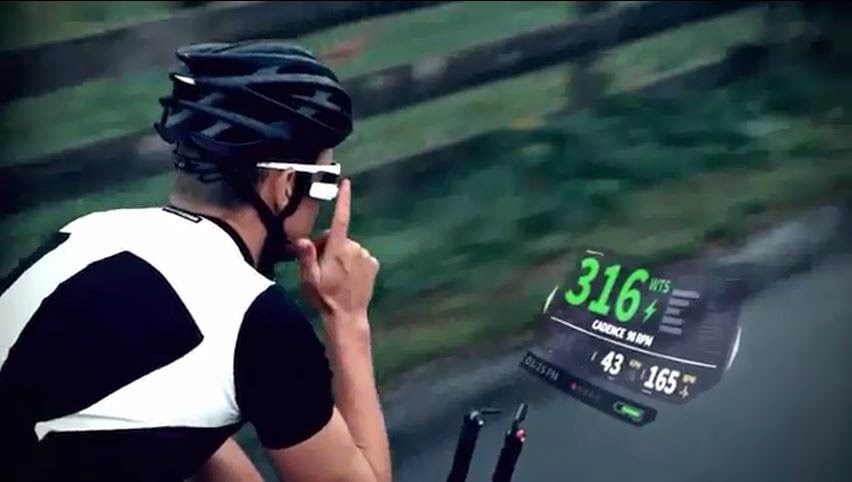 All that data just has to make you faster, doesn't it? I mean, if you're not tracking every watt of power, every minuscule change in heart rate and VO2, or everything else the sensors are supposed to measure for you, then you're not making the most of your ride -- and then what's the point? You're just riding your bike, and what good is that? Seriously, I think that's the message here. So naturally, the Recon Jet glasses are hyped as the "secret weapon" that will turn everyone into a winner.
One thing I can't help but wonder is how many cyclists scrolling through all their sensor readouts and data -- whether it's displayed on a bar-mounted smartphone, or if it's projected in front of their eyes with these virtual reality goggles -- are increasing their likelihood of being creamed by an SUV (whose driver is probably also scanning a smartphone) because it's taking their attention away from their actual surroundings. I'm sure the makers of Recon Jet will say their heads-up display is safer because the image is projected out in front of the rider, keeping his/her eyes in front. But my well-educated hunch is that it isn't really a question of where the rider's eyes are pointed, but more a question of what his/her brain is focused on.

Studies on cell phone use while driving have shown that there is very little difference between using a handheld cell phone and a hands free version. The problem with distracted driving isn't the type of device a person is using, but rather it is an issue of the brain's ability to focus. A person talking on the phone, regardless of the type of device, suffers from something researchers have dubbed "inattention blindness." What it means is that a person focusing on a call can be looking right at something -- brake lights, pedestrians, or cyclists -- and not see them. I'm not aware of studies that specifically explore this question of heads-up displays, but it seems to me that the existing studies on cell phones and driving have a good deal of relevance to the matter. It doesn't seem like a stretch to assume that focusing the brain's attention on all that data, and reading any kind of digital display, affects a person's reactions to the rapidly developing dangers that crop up while we're on the roads -- whether commuting, training, or just out for an enjoyable ride.

Once again, it's another example of information overload. Do we really need all that data to ride a bike? Does it really make a ride more enjoyable? More rewarding?

In my work as a teacher, the biggest change I've seen in the past 20+ years has nothing to do with the subject matter, or teaching techniques and strategies, or even in the laws that govern education -- but rather in the push for more data. We are now asked relentlessly, "Where's your data?" "How are you measuring student growth?" Keep in mind that we're being asked to measure things that aren't easily defined, much less measured. Ultimately the "best" teachers today are not necessarily the best at imparting knowledge, or reaching students, or inspiring them, but rather, by who is best at producing data. Seriously, I get enough of it at work -- the last thing I want to do is plug in and ruin my bike rides. I haven't even used the most basic bike computer, like one that simply measures speed and distance, in about 10 years. Yeah, sometimes, after exploring a new route, I'll find myself wondering how far I've gone -- though not enough to bother hooking up another computer.

I know I'm repeating myself here, but I'll say it again. Unplug once in a while. Just ride the damn bike.
Posted by Brooks at 12:25 PM