I don't think any movie title could sum up American attitudes towards the role of bicycles better than Sid Davis's 1969 bike safety film, Bicycle Today, Automobile Tomorrow. Though not nearly as scolding in its tone as Davis's The Bicycle Clown of 1958, it still reflects plenty on the ultra-conformist mindset of its creator (who was probably far more comfortable with his world in 1958 than he was in 1969), while underscoring the idea that a bicycle is nothing more than a stepping stone to automobile ownership. 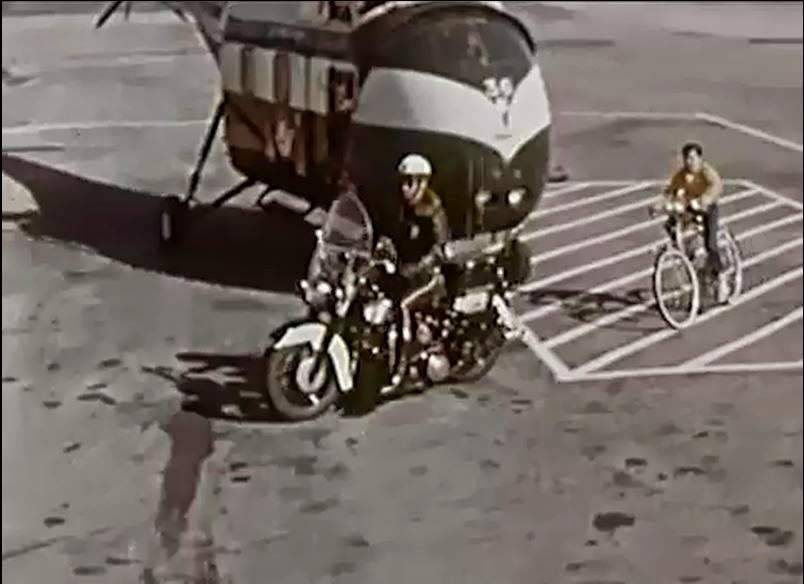 In the opening sequence of the film, we see a helicopter preparing for takeoff, while a motorcycle officer pulls up to the scene with a kid on a bicycle following close behind. The boy and the officer wave to the pilot and watch him lift off. The actual point of the scene isn't particularly clear (after all, the film's title is Bicycle Today, Automobile Tomorrow -- not Helicopter), until the mono-tonal narrator asks rhetorically, "What do the helicopter pilot, the motorcycle rider, and the bicycle rider have in common?" Though it sounds like the setup of a bad joke and we almost expect an equally bad punch line, the narrator quickly tells us, "The answer is quite simple. They have two main responsibilities. First, they must make sure their machines are in perfect mechanical condition at all times." Oddly enough, that was not the answer I was waiting for. Then again, the same could be said of almost anything involving equipment that can impact our health or safety. Try it. Automobile driver. Scuba diver. Sky diver. Power boater. Surgeon. Lathe operator. Miner. . .

Regardless of the opening message, the next scene of the film gives the most incomplete history of the bicycle ever set down in film, ultimately rendering it as even more irrelevant than the opening sequence:

That's it. That's the end of the history lesson. First there was a thing called a hobby horse. Now you have a bike. That's all you need to know, because when you turn 16, you'll get your driver's license and never look back again.

The next sequence takes us back to that statement about making sure our equipment is in good mechanical condition. The film shows the boy going over his bike, making adjustments and performing basic maintenance. It's mostly pretty basic stuff. Make sure your saddle is adjusted correctly and tightened. Make sure handlebars are positioned well and tightened securely. Horn or bell should be audible from at least 100 feet. A headlight is needed for night-time riding, and should be visible from at least 500 feet in the dark. "Remember, a well-kept bicycle is a safe bicycle."

Well, that pretty well covers the first thing the helicopter pilot, the motorcycle rider, and the bicycle rider have in common -- safety and maintenance. What's the second thing?

"The second thing common to the motorcycle rider and the bicycle rider is that they should know the rules and traffic laws that must be followed before riding on the streets." Notice that the helicopter from the opening scene was so irrelevant to the rest of the film that even the director already forgot about it. Of course, helicopters don't operate on the streets -- which is yet another reason why the first scene was irrelevant. I'm almost convinced that Davis just had some footage of a helicopter taking off and figured it would be a waste not to use it.

From here, we see the kid on the bike following the motorcycle officer all over town like some kind of hero-worshiper or puppy. First, to watch the police motorcycle brigades practice riding in formation. Once again, basically irrelevant -- but Davis never missed an opportunity to showcase the police looking their best. 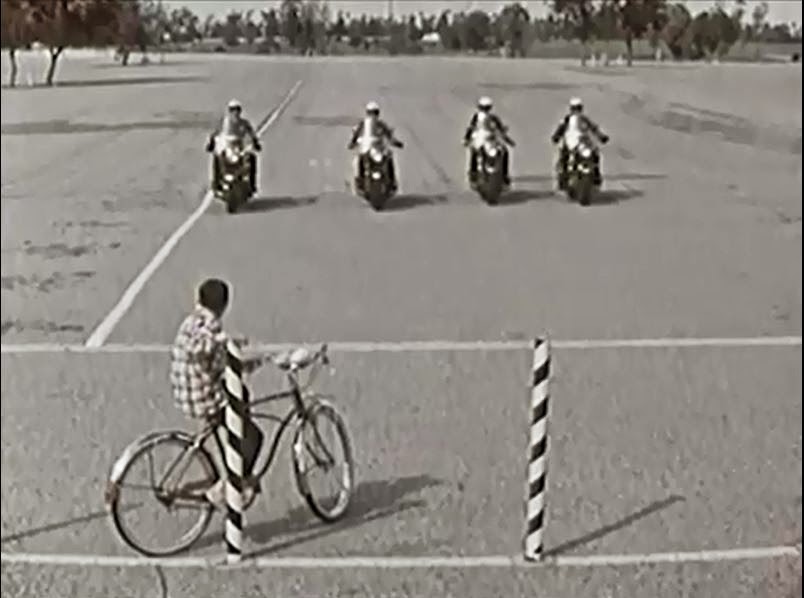 Next comes a litany of safety advice for riding. When it comes to riding on the streets and sharing them with car traffic, I have some mixed feelings about the advice given in the film. Some of the advice reflects the time period when the film was made and therefore seems less-than-ideal today. Some of the advice would be unnecessarily tedious in practice -- and some would probably make a person more likely to get hurt or even killed.
In the end, as the motorcycle officer leads the kid to the end of their tour, Davis summarizes the points of his film, and it's here where his typical judgmental tone comes forward:
That's right kids -- how you ride your bike is a reflection on your parents, school, and community. Hell, why stop there? Why not add God, Country, Democracy, and Capitalism while we're at it?

For a Sid Davis film, this one is not as dark, nor quite as overbearing as the films he is so well-known for. Nobody gets killed, maimed, or permanently disabled for being a "wise guy." But the message is pretty clear that riding a bike is really just a trial run at eventual automobile ownership, and the undercurrent of conformity is still there, especially in the film's closing words.