"That's my kid brother Jimmy. He's hurt," says the monotone narrator at the beginning of the 1958 bicycle safety film, The Bicycle Clown. Looking down at the wrecked bike under the bumper of a Chevy as his brother is taken away in an ambulance, he asks himself "why did Jimmy always have to stunt and show off?" And thus begins a drawn-out investigation as the youthful narrator tries to figure out how his brother ended up on the road to pain and misery.

Made by "the king of calamity" Sid Davis on a budget of approximately $1000 (no, really -- you can look it up), The Bicycle Clown is pretty typical of the safety films and other cautionary tales of its time in that it lays most of the blame for accidents on the hapless victims themselves. Sid Davis became particularly famous for his style of "guidance" films that invariably looked into dark subjects in which the young victims never fare well. The flat, judgmental narration is always particularly harsh towards the "wise guy" kids who "think they know better" and always end up suffering (or dying, in some cases) because they "did first and thought last." Some of Davis's other notable or notorious films include The Dangerous Stranger (about child molesters), Seduction of the Innocent (about drug addiction), Live and Learn (safety), and perhaps the most notorious and offensive "social education" film ever made, 1961's Boys Beware (about the dangers of homosexuality).

Like a young Joe Friday, the youthful narrator in The Bicycle Clown goes about interviewing pretty much anybody who has ever had contact with Jimmy, trying to find out how his kid brother ended up under the bumper of that Chevy. He first interviews someone at the local police station to "get some facts about bicycle accidents." There he learns (with the help of some really dynamic illustrations) that 1 out of 4 bike accidents happens because of a bicycle that is mechanically defective. One out of every 3 bike accidents involves an automobile, and 2 out of every 3 bike riders injured or killed in an accident has violated some traffic law or safety rule. By the way, it's possible that those statistics were drawn from actual contemporary traffic studies, but it's also entirely possible that Davis made them up out of thin air. His work was completely un-reviewed by any educational committees or fact-checking panels (that would have cost money) and it was not unusual for him to make completely unsupported claims in his films. So take the claims for what they're worth.

Because he wonders if his brother's bike might have been one of those defective bicycles that cause 1/4th of accidents, the young investigator visits Mr. Burt at the local bike shop. Was Jimmy's bike mechanically sound? Of course it was. But darkly, the narrator learns from Mr. Burt that Jimmy was more interested in flashy decorations and "ornaments" than in making sure his bicycle was properly adjusted.

Next, the older brother talks to Jimmy's friends who tell him how Jimmy loved to "clown and show off" on his bike. Although he made the other kids laugh, the narrator observes, "he didn't realize they were laughing at him, not with him." Needless to say, by this time in the film, a deeply disturbing psychological profile begins to manifest itself -- not just in Jimmy who "foolishly thought that childish showing off" was the way to gain social acceptance, but also in the obsessed older brother narrator who apparently is going to grill everyone in his town relentlessly until he gets the answers he's after.

The narrator's next visit is with Mr. Brown, the school's bicycle safety teacher. WHAT?! They have a bicycle safety class at Jimmy's elementary school?! How freakin' progressive! Anyhow, Mr. Brown tells him that Jimmy was one of the best riders in his class, but (there's always a big "but" in this narrative) Jimmy also had the "silly and dangerous notion that a good bike rider could take chances and violate the most important safety rules just to impress his schoolmates." It's then that we see a clip of Jimmy hitching a ride on the back of a big flatbed truck rolling by. "Jimmy would take his life in his own hands," we are told.


We then learn from another friend that Jimmy had been pulled over by police in the past for dangerous behavior, such as riding double, and riding against traffic. But by acting extra polite to the officer, and calling him "sir," the little sociopath was always able to get off with no more than a warning.

After visiting with the route manager at the local newspaper, we learn that Jimmy was a "dependable worker," but (again) there had been many complaints from customers about Jimmy's reckless bike riding. It's then that we see him speeding down the sidewalk, just narrowly missing slamming into a woman with a baby carriage. 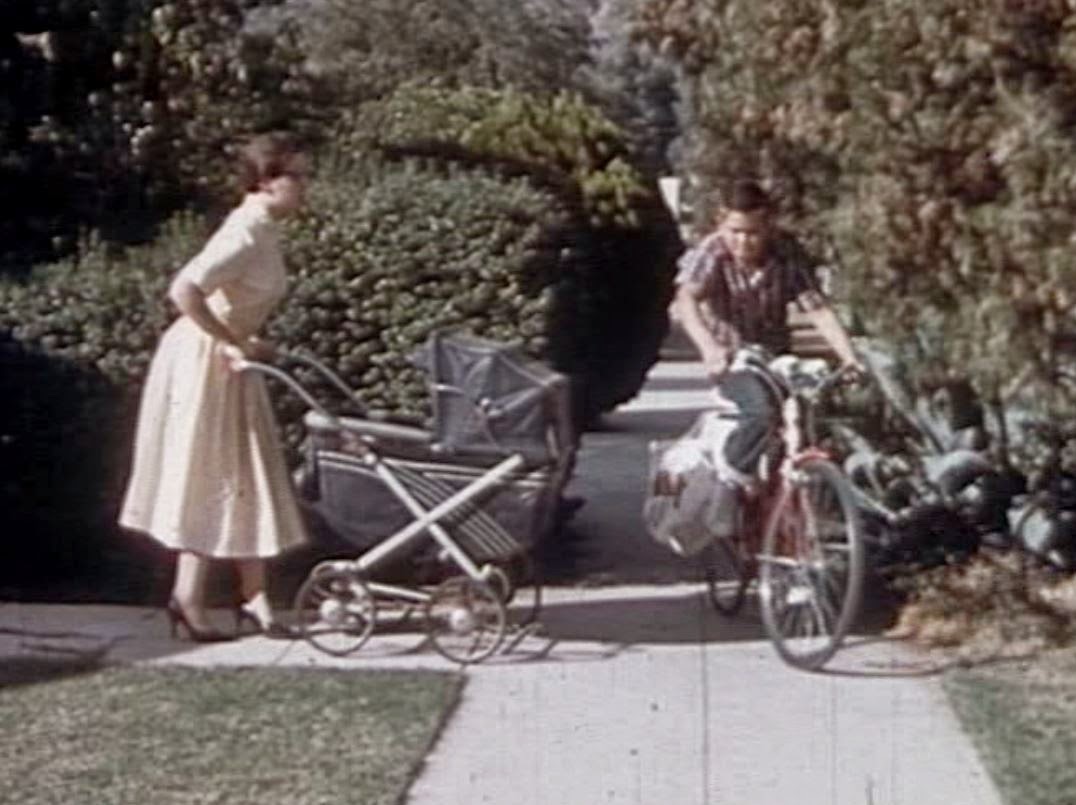 We learn from the newspaper route manager that "Jimmy had the foolish and dangerous 'it won't happen to me' attitude." That's always a serious condemnation in a Sid Davis film.

Next, the older brother visits with Jimmy's gray-haired teacher, who describes him as a "bright and willing student" who had suffered a recent disappointment when he didn't make the basketball team. It seems a bit strange that he has to talk to the teacher to learn this about his younger brother. "He was bitterly disappointed when he was not chosen" and so he tried to make up for it through "reckless stunting." Again, we see Jimmy trying to raise his social status with the other kids by showing off.
Then comes that fateful day, when we see Jimmy careening down a hill, no hands, showing off for a couple of little girls as he flies right through a stop sign and into the main street.

So finally, we have a complete picture of Jimmy, and it isn't good. Jimmy was clearly a deeply disturbed young man who desperately tried to make up for his various disappointments and failures through reckless stunting and showing off -- often in an effort to raise his status in the eyes of classmates and younger hero-worshipers. His insatiable hunger for acceptance drove him to dangerous, life-threatening behavior. Of course, it doesn't occur to the young narrator, and probably not even to Sid Davis himself, but maybe young Jimmy needs some serious psychological counseling. Not only that, but it raises a question for me which is -- where the hell are Jimmy's parents in all of this? And could this whole tragedy have been avoided if his parents had just shown him a little love once in a while? Could his pathological need for acceptance stem from a lack of support and guidance from his conspicuously absent parents?

In the end, I can't decide if The Bicycle Clown would serve better as a bicycle safety film, or a lesson in child psychology.