Few vintage bikes get more scorn heaped upon them than the lowly Schwinn Varsity. Disparaging the Varsity is a popular pastime for many bicycle enthusiasts of a certain generation -- that is, any generation old enough to have been riding between about 1960 and 1986. On the Classic Rendezvous Google group, the mere mention of the Varsity in a recent thread on important/significant bikes of the past was enough to get a major back-and-forth argument going on for a couple of weeks. 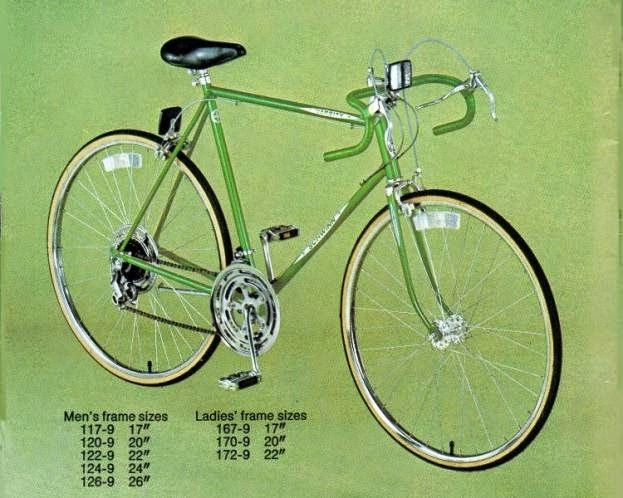 For my part, I don't think anyone can argue that the Schwinn Varsity was a great bike -- not while maintaining a straight face, anyhow -- but I would argue that it was at least an important bike. There is a difference.

Having recently taken a close look at the classy and under-appreciated hand-built Schwinn models, like the Super Sport, Sports Tourer, and Superior, it might be a good time to examine the bottom-level, budget priced Varsity.

Tom Shaddox, on the late Sheldon Brown's website, said of the Varsity, it has the "oxymoronic distinction of being one of the heaviest lightweight bicycles ever built." It is a bit of irony, to be sure, but for the target market, weight was not as important as durability -- and durability was something the bike had in spades. Schwinns in general were built to last, and that is one of the things the company's customers expected and valued.

What makes the Varsity an important bike is its impact on the American cycling public in the 60s and 70s. Yes, it continued to be made, virtually unchanged, well into the 1980s, far longer than it ever should have been, which is another story. But to understand the significance of the Varsity, I think it's important to understand the American bicycle market throughout the first half of the 20th century and right up through the 1950s. Hardly anybody old enough to have a driver's license at that time rode a bicycle, yet in 1960, Schwinn made the decision to offer an entry level "10-speed" derailleur-equipped bike (actually, I should note that the first Varsity was an 8-speed -- it would be upgraded to 10 speeds a year or two later). Somebody at Schwinn must have believed it was worthwhile, and I'm sure that it wasn't because they saw dollar signs. They could not have seen adult bicycles as a money maker. For much of America, the Varsity turned out to be the introduction to drop-bar, derailleur-equipped "10-speed" bikes -- solidly built, and from a name they recognized and knew they could trust.

The Varsity was one of Schwinn's "Electro-forged" bicycles -- mass produced in a way that was unduplicated by anyone else. Huge coiled rolls of steel strip were rolled and welded into tubing. Pieces of flat steel were stamped, rolled, and welded into frame fittings such as head-tubes and bottom brackets. The tubes and fittings were flash welded into complete bikes, built up with a combination of Schwinn-made components (like the steel "Schwinn Tubular Rims") and "Schwinn Approved" components that were made elsewhere to the company's strict specifications (including Normandy hubs, Huret Allvit derailleurs, and Weinmann brakes -- all re-labeled "Schwinn Approved").

From the introduction of the Varsity and through the 60s and 70s, Schwinn continued to expand its offerings of "10-speed" and derailleur-equipped bicycles. It should be noted that the Varsity and the Continental were basically the same bike but the Continental came equipped with tubular-steel fork blades as opposed to the Varsity's flat forged fork (and it sold for about $15 more). In fact, many people refer to the Varsity and Continental together as the "Varsinental." The more upscale hand-built Superior/Super Sport/Sports Tourer models were added to the middle level of the lineup. In 1974, there was a "Sprint" model added (below the hand-built models), which was basically a Continental, but with a shorter wheelbase and a curved seat tube, modeled after the "Sprint" framed Paramounts. And of course, the Paramounts were always there at the top of the heap.

Sales of the Varsity, and its closely related sibling, the Continental, grew through the 60s, and went through the roof during the bike boom of the early 70s. During those years, Schwinn cranked out more Varsities than all other "10-speeds" combined, and given the long quarter-century production run, the Varsity has the distinction of being the single biggest selling "10-speed" model ever. Millions were built and sold, and because of their near-legendary durability, there are tons of them still out there. At any given moment on eBay, one can find dozens (many dozens, really) of complete examples for sale, ranging from battered and barely functional to pristine and like new -- with prices varying accordingly. Frames, forks, and all kinds of original components are plentiful, too. More are available through Craigslist postings and classified ads, and countless examples can be found routinely at garage and yard sales -- or even on the curb on trash day (a sorry fate, but there's no better bargain than "free"). Though they are far too plentiful to be considered "collectible," it isn't uncommon to find people charging (or people willing to pay) collectible prices for them simply by virtue of the Schwinn name.

Though it's easy to make fun of the Varsity and its close siblings for their "weight problem," I think it's important to look at what else was available in that entry-level market in the early 60s. Imported entry-level "10-speeds" were lighter, but the difference often wasn't as great as some would have you believe, especially if one compared bikes of a similar price. The component choices on the Varsity weren't out of line either. Huret Allvit derailleurs were common on bikes of that level in the early 60s. The steel, one-piece "Ashtabula" cranks were heavy, but how much heavier were they than the cottered steel cranks on the imports? And besides, the one-piece crank was relatively easy to work on, and had a remarkably long service life. Most bikes in the Varsity's price range came with steel rims, so again the weight difference couldn't have been outrageous, and the Schwinn-built rims have been described as "among the sturdiest ever built."

I'd argue that the Varsity, or "Varsinental," was a decent bike for its time -- but it failed to keep up with the times, and I believe that is where a lot of the derision comes from. Even by the early 70s, the bike was getting long in the tooth, but the Bike Boom buyers weren't very picky. As Schwinn began importing bikes from Japan in the 70s to meet the increased demand, their own imported bikes were lighter and worked better than the "Varsinental" for about the same price. Unfortunately, Schwinn didn't read the signs. As already mentioned, the bike was made with only minor changes for roughly 25 years, right into the mid 80s. There was no "Varsity II" that would improve or build on the reputation and keep the bike competitive with the imports, and that was a story that was all too common with long-established manufacturers. Much the same thing could be said of component manufacturers like Huret, who made the Varsity's Allvit derailleurs as long as Schwinn was willing to spec them, only to be badly outpaced by Japanese competition.

So even though the Varsity was a "heavyweight" masquerading as a "lightweight," and a bike that wore out its welcome by not keeping up with the times or competition, it does still have the significant distinction of having introduced many Americans to the concept of adult bicycling, and igniting a love of bicycles that continued on long after those riders had moved on to better, lighter, and more "desirable" bikes. They may not have been great bikes, but they got a lot of people riding, and there's something pretty great about that.
Posted by Brooks at 11:18 AM