The Art of Cycling

I recently finished reading Robert Hurst's book, The Art of Cycling, (2nd Ed., FalconGuides, 2014), a guide that I would recommend for commuting cyclists and anyone else who navigates a lot of miles on traffic-clogged streets. Though Hurst's book is sub-titled "Staying Safe on Urban Streets," there is a lot of useful advice for dealing with traffic in general -- not just in urban environments.

One of the first things people might want to know about the book is how it compares to John Forester's Effective Cycling, which is for many people the ultimate authority on riding skills, and the source of the principle that has come to be known generally as "vehicular cycling." While I would say that the advice given in Hurst's book is, for the most part, generally consistent with Effective Cycling, it does have a somewhat more flexible, nuanced view. Hurst occasionally refers to Forester's work directly, but likewise points to some differences:

"Next to the absentminded anarchy practiced by many novices, the vehicular cycling principle is a stellar guideline. Just by obeying traditional traffic-law principles and riding predictably, a bicyclist eliminates a large portion of the danger of cycling. However, the vehicular-cycling principle has a big hole in it: The strict vehicular cyclist who has eliminated many of his or her own mistakes by riding lawfully will still remain quite vulnerable to the mistakes of others." 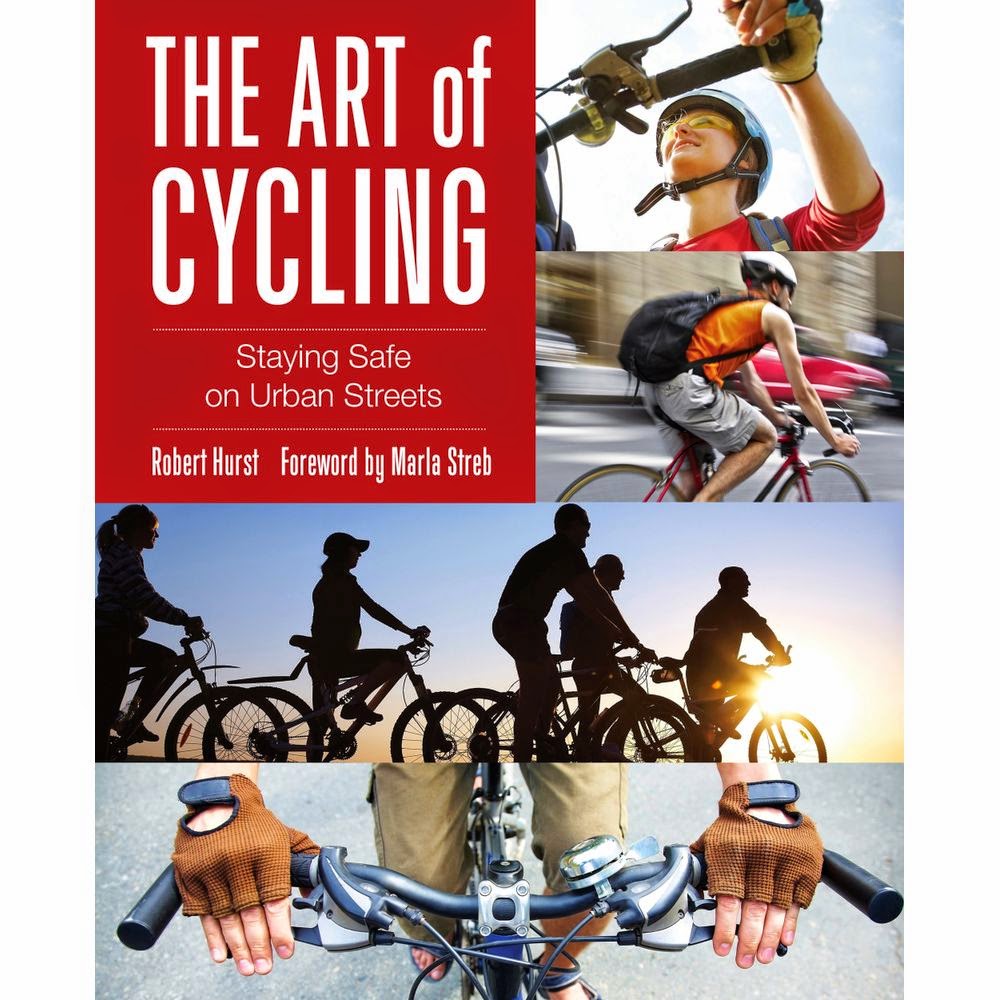 In some parts of The Art of Cycling, Hurst is more directly critical of Forester's message -- or at least, critical of the way some people interpret it. He writes, "Some cyclists have added a very confrontational tone to the framework of Forester's message. It is a small group, but a very visible and loud group. Through their riding habits in traffic, which are often deliberately, theatrically antagonistic, they seek to make some kind of point to their special audience of other road users."

Hurst's riding advice tries to take into account the riding behavior of experienced cyclists -- including those who are vocal proponents of vehicular cycling, but whose actual riding actions may deviate from the strict interpretation of that very principle. In his alternative, Hurst says his book provides a "synthesis of sorts between old-fashioned vehicular cycling and the reality of modern street riding. We'll pay homage to the masters who have molded vehicular cycling to their needs, creating a more enlightened and nuanced style."

In offering a more "flexible" version of vehicular cycling, Hurst does not suggest riding strategies that would put one outside the law, such as running red lights, hopping from street to sidewalk and back again, or even filtering to the front of a line of stopped cars (apart from some legal exceptions -- and even then, he recommends caution and common sense). Instead, he stresses adapting "to the ever-changing chaos of city life," finding the "path of least resistance," and using the "safest, easiest, and most stress free options" for getting where we want to go. For example, whereas Effective Cycling and many strict vehicular cyclists may express opposition to bike-specific infrastructure such as bike lanes, cycle-paths, etc., and some may even recommend against using such infrastructure as a matter of principle -- Hurst says riders should remain open to such options. He stresses that all cycle-specific facilities are not created equally, but when well-designed, they can be worthwhile. Some people argue that the presence of both pedestrians (who seem to have the right-of-way even on bike lanes) and inexperienced and unpredictable novice cyclists makes such bike lanes and cycle paths even more dangerous than the streets. Hurst, instead, points out that one needs to exercise some caution -- don't get lulled into a sense of complacency just because it's a "bike path" -- but if there is bike-specific infrastructure available, and it gets you where you need to go (or at least close to it) then one should use it.

If there is an overall theme to the advice put forth in The Art of Cycling, it would be that responsibility is more important than blame. If someone in a car runs a red light and hits a cyclist, then of course the driver is at fault -- we can assign blame to the driver. But assigning the blame to the driver does little to help the injured cyclist who would clearly be better off if he/she had not been hit by the car in the first place. Hurst maintains that it is the responsibility of the cyclist to remain vigilant -- to be alert and watchful of what might potentially happen, and to be prepared for it at all times. Hurst says, "Car-versus-bike accidents require two parties: one to make a colossal mistake and another to be caught off guard by it, one to screw up and another who fails to fully respect the potential of the other road user to screw up."

He continues, "The motorist backing blindly and illegally into the roadway is just another something that happens in the city. Drivers back out of hidden alleys, parking spots, and driveways all the time. It must be expected. It must be prepared for. The law blames the motorist for such a collision -- as it should -- but the safe cyclist blames him- or herself for being distracted and unprepared. It's either that or get used to eating trunks and side panels." It's tough advice that we as cyclists might not want to hear. But ultimately, there's something to it. Nobody is more responsible for our well being than we are ourselves. Not only that, but it fits with something I've long told myself when riding with traffic -- that we can never assume or expect that drivers see us, and we should probably assume that even if they do see us, they probably don't care. I know it may be cynical, but it's the kind of cynicism that keeps a cyclist from getting complacent -- and it could be worse. An old friend of mine, a former NYC bike messenger, used to assume that it wasn't even a question of whether drivers saw him or not, but rather it was his belief that they actually wanted to hit him.

On the always-challenging subject of helmets, The Art of Cycling takes a similarly nuanced view. Hurst recommends helmet use for the protection that helmets can give in certain kinds of accidents -- but also gives a straightforward account of the deficiencies of helmets, unrealistic testing standards, and even of the flaws in accident data that people use to support vociferous demands for helmet usage. For example, regarding testing standards, Hurst writes, "If you look on the inside of a new helmet these days, you should find a sticker stating that the helmet meets the standards set by the Consumer Product Safety Commission (CPSC). Make sure the sticker is on any helmet you purchase. But don't get too excited about it."

In addition to the book's guidance on riding techniques, there is also a bit of advice on minor repairs, and choosing tools and equipment -- without getting so specific that the advice would be obsolete within a year or two. And there is also quite a bit of bicycling history -- not just for the sake of including "colorful side matter," but rather to help illustrate how "the birth of the bicycle, the rise of the auto, and the postmodern American sprawled-out city are all lined up along the same continuum." Hurst shows how many of the problems faced by bicyclists today have their roots in the distant past and the early days of the bicycle. It makes for some interesting and enjoyable reading.

I found The Art of Cycling to be a worthwhile read -- and an interesting counterpoint to Effective Cycling (which I also recommend reading). The style is light, informal, sometimes irreverent, and sometimes humorous. Much of what Hurst writes about negotiating traffic seemed to fit with what I see and do myself through my many miles of bicycle commuting. While I can't say I agree with everything in Hurst's book, I did find myself agreeing a lot more often than not, and even then, any differences would be more a question of style than substance. He has some solid advice that could help different kinds riders, whether experienced high-milers, or nervous novices.
Posted by Brooks at 7:08 AM