Once again, I managed to get out for a Christmas bike ride - a tradition I've managed to uphold a lot more often than a person would expect for Northeast Ohio. There have only been a few years when the weather was too cold or too snowy to ride either on Christmas, or at least the day before or after (which I still count). And on the few occasions where I couldn't ride, I was able to get out for a little cross-country skiing.
After opening presents with the family (I got Smartwool socks, a sweater, and a gift card for the bike shop -- all very satisfying) I figured I had a few hours before relatives started arriving so I suited up for a fairly manageable 30 degree ride under gray skies. We still had some snow on the ground from about a week ago, but Saturday, Christmas Eve, saw drizzly rain and temps in the 40s, which got rid of most of the snow save for a few patches here and there.

I headed down to the Cuyahoga Valley National Park to explore some of the quieter, more scenic roads in the area. I rode the Rivendell Long-Low because even though the rain had stopped, I knew things were likely to be soggy and I wanted a relatively light road bike with fenders to keep the mess to a minimum. It's probably my favorite bike for casual rambles through the valley. 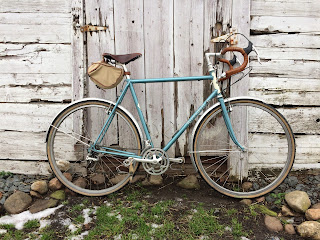 By the old covered bridge near Hale Farm & Village I ended up having to take a little detour from my planned route. The road past the bridge has been closed by the park service for a few years now, though it is still passable by bike or on foot - one just needs to thread their way between the barricades. Of course, being closed to traffic, it also doesn't get plowed or salted and the snow that covered the road had turned into a thick layer ice. It was treacherous even to walk on, much less try to ride over with fine-tread road tires, so I figured it wasn't worth the trouble. I crossed the covered bridge and found a different way.

I was surprised that I didn't see any other riders along my way. I saw a couple of joggers, and that was it. Overall, it was a nice quiet Christmas morning ride.

Wherever you are, I hope you're enjoying your holiday - and if you're able to get out for a ride, so much the better. Merry Christmas from the Retrogrouch.
Posted by Brooks at 12:35 PM