I'll bet a lot of Retrogrouch readers remember this: 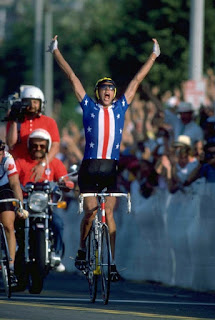 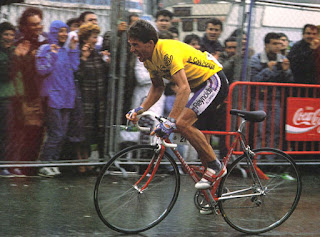 And almost certainly this: 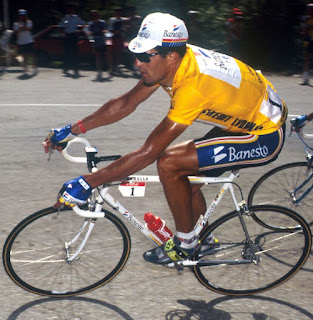 And even though there's nothing even remotely retro-grouchy about it, even the young ones probably remember this: 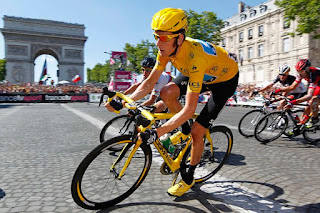 Well - as Nobel Prize winner Bob Dylan once said, the times they are a'changin'. One of the most successful bike brands in Tour de France history (12 wins) has just been sold. The story has been circulating for months as a deal was apparently in the works, but now it's official: the luxury brand conglomerate LVMH (Louis Vuitton Moët Hennessy) has acquired Pinarello. The storied racing bikes will now be part of the luxury boutique products family that includes such names as Moët Chandon champagne, Hennessy cognac, Louis Vuitton handbags, Givenchy and Christian Dior fashions, Bulgari and TAG Heuer timepieces, DeBeers diamonds, and many more.

The brand was founded in 1953 by Giovanni "Nani" Pinarello, who had achieved some fame early in his racing career for finishing in last place in the 1946 Giro d'Italia, earning him the "maglia nera," or black jersey. Knowing he had no chance of winning the race against riders like Magni and Bobet (who would go on to win the general classification and the mountains leader respectively), he actually worked to secure last place because in those days the maglia nera was celebrated at the finish alongside the race leaders.

He opened his bike shop Cicli Pinarello in Treviso, Italy, after being sidelined from the '52 Giro. He gradually began building his brand, offering frames and bicycles, sponsoring small teams in the 1960s, and growing his reputation. As I understand it from reliable sources (though it's not mentioned on the history page of the company's website) the early frames were contracted out to other reputable builders, which may have included such names as Cinelli and Galmozzi. Eventually, framebuilding was brought in-house. The first big racing success of the Pinarello brand came in 1975 with a Giro d'Italia stage win with Fausto Bertoglio on the Stelvio Pass.

Many Americans will fondly remember American cycling "coming of age" in 1984 with Alexi Grewal winning the Olympic Gold Medal in Los Angeles, astride a Pinarello, and with his hands flung high in the air. The brand saw a surge in popularity in the U.S. soon after.

In the 1980s, leadership of the company began to transfer from father Nani to son Fausto, and in 1988 Pinarello got their first Tour de France win with Pedro Delgado. A few years later would come a long string of TdF victories with Miguel Indurain and his five successive wins, followed by Bjarne Riis in '96, and Jan Ullrich in '97. More recently, Team Sky with Bradley Wiggins and Chris Froome would bring the brand's total to 12 TdF victories.

The bikes have obviously changed a lot over the years, and the romantic notion of old Italian craftsmen wielding torches and building bikes by hand has been replaced by computer-optimized carbon fiber frames popped out of molds (and probably not even in Italy anymore). Even though the romanticized image is long gone, I still can't help but feel something is being lost.

Bicycling as an industry seems more and more to be directed away from working class and middle class people, and towards people with means. More luxury goods for the 1%, expensive toys for the rich, to be bought at expensive boutiques and bragged about alongside their golf clubs, polo mallets, Porsches, and speedboats.

Bicycle racing has strong working-class roots. Many racers of the golden era came from poor families, and saw racing as a way up. Stories abound of riders who scraped money together for an affordable bike - or club racers who used their bike for daily transportation during the week, and then would strip off their fenders, change their wheels, and go racing on the weekends. Okay, so it hasn't been like that for a long long time. But it's also clear it will never be like that again.

This movement of bicycling towards the investment and leisure classes began some time ago (consider so-called Halo Bikes) and certainly won't end here. The acquisition of Pinarello by LVMH will very likely be good, financially, for the bike maker. And I'd absolutely expect to see similar deals in the works being announced with other storied bike names and luxury brand conglomerates.

I won't be surprised when it happens. But I won't be celebrating it, either.
Posted by Brooks at 10:16 AM