I just finished reading a fun book that might appeal to Retrogrouch readers: The Hardmen: Legends of the Cycling Gods, by The Velominati (2017, Pursuit Books). The book was just released this month in the U.K., but it will not be released in the U.S. until November (the U.S. edition will be under Pegasus Books). If my fellow 'Muricans don't want to wait until November, it may be possible to get a U.K. edition through the internet shipped to the U.S., but I haven't tried so I honestly don't know. 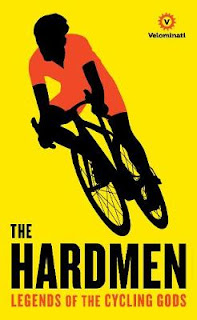 Readers may be familiar already with The Velominati (AKA Frank Strack, John Andrews, and Brett Kennedy) who call themselves "The Keepers of the Cog" and are known for publishing "The Rules" which is a perhaps-not-entirely-serious list of rules to which all cyclists should adhere -- or at least attempt to. The basic premise of The Hardmen focuses mostly on rule #5 (or "The V") which is this: "Harden The F### Up." The book then goes on to share the legends of about 35 racers who really lived up to "The V." Of those 35, Eddy Merckx and Sean Kelly get mentioned twice (and why not?), and one entry is dedicated to an entire team (the Mapei team of the late '90s) instead of just an individual.

Overall, the book is divided up into five sections, each for a different category of rider: Les Rouleurs. Les Grimpeurs, De Klassiekers, Les Domestiques, and I Velocisti. For those unfamiliar with French, Dutch, or Italian, those translate (at least roughly) to All-Arounders, Climbers, Classics Specialists, Support Riders, and Sprinters. Read the book if you want/need explanation for why The Velominati use the languages the way they do.

The Hardmen is not a complete "tell-all" biography on each of its subjects, but rather tells a story or relates a particular legend of some defining moment (or moments) that reveal how that rider embodies "The V" -- how their ability to suffer and to endure makes them stand out above all others. One such story is that of Eddy Merckx, who on the day before the 1971 Liége-Bastogne-Liége Classic rode his bike the hundred kilometers from Brussels to Liége in a miserable rainy/snowy mix, as if almost to punish himself for not winning Fléche Wallonne earlier that week - and went on to win the race the next day. Not only did he embody rule #5, but also rule #9 -- the one that says "If you are out riding in bad weather, it means you are a badass. Period."

As the book's subtitle "Legends of the Cycling Gods" would seem to imply, there is quite a bit in The Hardmen that delves into the mythology of bicycle racing, but the style seems to walk a line between Reverence and Irreverence - often skipping back and forth over that line as if in a game of hopscotch. It's fun and enjoyable reading that, just like "The Rules," you know The Velominati want you to take seriously, but not too seriously. For instance, the authors explain in the Prologue how they came to their list of 35 Hardmen:


"The Keepers fell in love with Cycling during the '70s, '80s, '90s and beyond, and have become ever more obsessed with its history and legends. Thus our frame of reference leans towards the riders who inspired us during that time and the myths about them that we discovered as we dug ever deeper into the sport. Also, we're more interested in riding our bikes than we are in doing things like 'research', so this book is written in true Velominati style: (ir)reverently and subjectively. We imagine that if it feels true, it probably is true. And if it happens to be wrong, then maybe being wrong makes it right. When we convened our Hardmen Selection Jury, we quickly came to the realization that we had many more subjects than we had room for, and we knew we couldn't spend the rest of our lives sitting in the Velominati bunker arguing, pint in hand, about which riders should be included. So we went with our favorite stories. And we certainly didn't worry about who was or wasn't allegedly doping."

The particular list of racers selected is by no means all-encompassing. There are likely lots of racers over the years whom some might be inclined to include, or even feel very passionate about, but who did not make the list. For instance, Andy Hampsten is included, but not Greg LeMond. Lance Armstrong is not included, despite being mentioned numerous times throughout the book (usually adjacent to such colorful words "@$$hole" "D#ckhead" and others that I'll leave to your imagination. The Velominati don't pull punches, and they don't censor themselves like I do).

By the way, I can't explain how happy it makes me to see that several of the book's Hardmen are actually women. Yep, among the ranks of such racing greats as Eddy Merckx, Bernard Hinault, Sean Kelly, Roger De Vlaeminck and many more are listed great women like Marianne Vos, Rebecca Twigg, Lizzie Deignan (née Armitstead), and Beryl Burton. I could wholeheartedly agree with the writers' assessment that the 2012 Olympic Women's Road Race (where Vos took Gold while Deignan took Silver) was a much more exciting race to watch than the Men's Road Race of the previous day. The women battled it out in a miserable rainstorm, and I don't know how else to describe it except to say that it was absolutely evident they were giving it their hearts and souls, while the Men's race seemed like a bunch of high-paid pros making a publicity appearance (which in a way is probably accurate).

I should mention that anybody who tries to faithfully live up the The Velominati's Rules could find it difficult to find time to read The Hardmen. After all, it's difficult to "harden the F### up" if you're kicking back and reading a book. And if you're thinking about reading on a rainy day, then you're not exactly a badass living up to rule #9. In that regard, the structure of the book actually makes it such that a person can always read a chapter or two (each is fairly brief) in a short time, and could if they were so inclined skip back and forth without feeling the need to read cover-to-cover in any particular order. Even the Velominati themselves point out humorously that when you finish reading, put the the book away and "go for a ride."

Whether you try to procure a copy from the U.K., or wait for the U.S. edition, I think many Retrogrouch readers would enjoy The Hardmen.
Posted by Brooks at 4:32 PM