School has ended for the summer - I finished the year having ridden to work 108 days, which was just three days shy of my record. I had a 61% bike-to-work average for the year. Now that I'm done, the first couple of days off have been about as ideal as can be for biking for pleasure.

I got up early this morning and took the younger of the Retrokids to school (yep - they still have a few days left - our schedules never line up). She was excited because she'd get to ride her bike to school. We rode over together, locked up her bike, said goodbye for the day, and then I decided to get out for a nice ride on my own.

The Ohio & Erie Canal Towpath is a fantastic resource for cycling. I've mentioned more than a few times here on the blog about riding it with my kids. Normally when we cycle the Towpath, we take it north from Akron, through the Cuyahoga Valley National Park. But the Towpath not only runs from Cleveland to Akron, but continues through downtown Akron and south towards the city of Canton. I decided to take a ride on the southbound stretch of the path today. 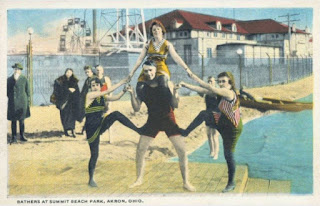 Then somebody figured out that the city's sewers emptied directly into the lake. Not kidding. I'm sure it's much better now (thank you EPA) but there are still signs around the lake warning "no swimming" and I don't think it's because there are no lifeguards. People fish in the lake, but I can't say I'd eat anything caught in it.

One thing about this southbound section of the Towpath is that there are a lot more geese for some reason. It's not unusual to get stopped by a gaggle of them, and right now they've got lots of goslings. Got to be careful, 'cause they get mean when the babies are around. The other thing is that the path south of Akron is generally a lot quieter - it's not as popular a destination for families as the sections that span the national park, though it also helps that it was a weekday morning.

Anyhow - as you can see, we had stunningly blue skies today, and temperatures only got up to the mid 70s. It was as perfect a kick-off for the summer as a person could ask for.
Posted by Brooks at 6:43 PM