It's the end of another school year and time to tally up my bike commuting numbers for the year. 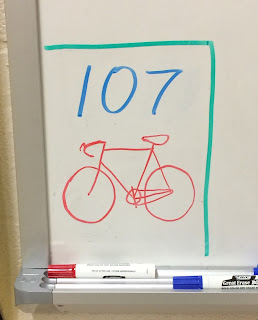 For those who aren't regular readers, I'm a full-time teacher so when I talk about a year, I'm referring to a "school year," or the time from late August through May. That time frame obviously includes the winter months, which here in Northeast Ohio can often be pretty miserable for cycling, and does not include the summer months. This past year we had another relatively mild winter and although I didn't have the record-breaking numbers I had last year, I did get close. Last year I set a new personal record of 111 days, for an average of nearly 63%. This year I rode 107 days for an average of 61%. As of right now, there are still a couple of days left, so there's always the possibility of adding a couple more to my total.

Keeping my average over 60% means that I exceeded my primary goal for the year (to bike to work at least 50% or more). But by exceeding it by so much, I also improved on my long-term average and met my secondary goal. Since I began bike commuting in earnest, I've had a couple of years where I made it to 50%, and a couple of years where I fell short. (Actually, the winter of 2014-15 was so miserable that I only finished that year at 35%). Until just recently, my multi-year average was still trailing the 50% mark, but once I passed 100 days for this year, I moved my long-term average up to 50% over the course of the past five years.

All totalled up, my commuting miles work out to more than 3000 miles over 9 months. Over the past five years, that number is more than 12,600 miles that I did not put on my car. Based on my car's 30 mpg average fuel economy, I figure that I've used about 420 fewer gallons of gasoline and probably saved roughly $1000. I don't even know how much my carbon footprint has been reduced, but it feels pretty significant.

Type II Fun: That's the kind of fun that's only fun afterwards. Being determined to ride even in the winter means putting up with some frigid temperatures. As long as the roads are clear, I try not to let it stop me. I have my limits, but the coldest morning I rode this year was somewhere around 13° F. That said, I had what might charitably be called some "Type II fun" one morning in January. Since I'm recapping my year, allow me to share the story of my craziest commute from the past 9 months.

On this particular morning, it was cold, but there was no snow on the ground, and the roads were clear. The weather forecast said we had a chance of some snow early in the morning (around 35% chance if I recall), but clearing and a little warmer by afternoon. I decided to ride. Even if it did start to snow before I'd arrive at work, I remember thinking "how bad can it get?" In hindsight, that's a question that never has a good answer.

About 15 minutes into my nearly hour-long ride, a very light flurry started to fall -- so light that it was barely noticeable, and I thought "this is not too bad" and I kept riding.

About 30 minutes in, the light flurry had turned into a full snow shower. Snow began sticking to my glasses and fogging them up, so I removed them. Then I had snow going straight into my eyes and I realized I was going to end up being blinded with or without. At this point, I was already half-way to work, so turning back would have been pointless -- I'd have still been riding through the same blinding snow for just as long, and I wouldn't have been getting any closer to work. I kept riding.

Another 10 minutes, and the snow shower became a full-out blizzard. Snow was covering the road, accumulating everywhere, and sticking to every surface. I was starting to lose traction, especially on the hills, but I just kept plugging along, albeit slowly. Even though I could sometimes feel my tires slip, somehow I managed to stay upright.

At this point, I knew I only had a few more miles to go, but it just got worse and worse with every pedal stroke. Gradually, so much snow was sticking to my bike and my wheels, clogging up my derailleurs and brakes, and packing in around my tires and fenders that I felt like I was dragging an extra ten pounds. Turning the pedals kept getting harder, and shifting gears became impossible. I wasn't even sure if my brakes would work, and if they did, I probably would have ended up wiping out and hitting the deck anyhow. At this point, stopping didn't even feel like an option. What else could I do? I kept riding.

Though it felt incredibly slow, I finally pulled in at work, still 25 minutes before first bell. Surprisingly, the ordeal had added no more than about 10 minutes to my commute, and I was still there well before most of my colleagues in their cars, and long before most buses, too. Every inch of my bike was covered with snow, especially packed in around the wheels and fenders. I had so much snow covering my body that I looked like some kind of snowman. That freakish storm dumped almost 6 inches of snow in about an hour, then stopped. Just as predicted, the day cleared, and by afternoon most roads were plowed and I had a completely uneventful ride home. I was miserable through the ride that morning, but after it was over, I couldn't help looking back at on it and laughing. I still don't know if I earned people's respect or their ridicule, but that's what Type II fun is all about.