I Get No Respect: The Campagnolo Velox

Cheap Campy gets no respect.

I'm not going to try to argue that Campagnolo's cheaper offerings for entry level bikes are worthy of much respect, though that's mainly because they are often such a stark contrast with the company's higher-end offerings. Compared with most of their intended price-point competition from the period (the non-Japanese competition, at least), they are realistically about "par for the course." But more than that, I simply find them rather interesting.

Probably the worst thing one can say about some of these derailleurs is that Campagnolo stubbornly made them long after there could be any possible market for them. Take a look at some of the bad and the ugly.


The Valentino was used on a lot of entry-level 10 speeds in the late '60s and early '70s, and realistically wasn't any worse than something like the Huret Svelto or Allvit which were the main competition in the price range. Want to know the really crazy thing though? The last version of the Valentino, which was mainly unchanged except for a really goofy pulley cage design, was still in the Campy catalog as late as 1985!

Then there's this one, from my collection:

I'm not positive, but based on the prettier finish and the decorative bolts, I assume that the Velox was supposed to be a step above the Valentino (another reason to question that whole father/son thing). 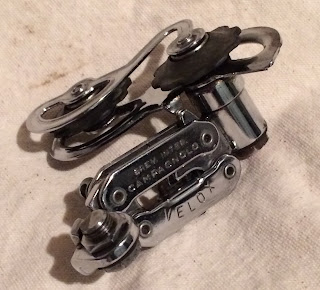 The Velox wasn't a long-running model though. After only a few years, it disappeared from the catalog and was replaced by the Nuovo Gran Sport - which was based very closely on the Nuovo Record, but much less attractive.

I enjoy derailleurs like these as fun little collectibles, but unless I was trying to put together some period-correct restoration of a bike that originally used one of these models, I think they really are best left as interesting curiosities and nothing more. I mean, at the same time that most of these things were being made and installed as OEM equipment on new factory bikes, one could just as easily have installed a SunTour derailleur with its innovative slant parallelogram design (introduced in 1964) that would work astonishingly better for less money.
Posted by Brooks at 12:34 PM