Why Do You Ride?

I got that question from a student the other day. Why do you ride?

Specifically, the question was why do I ride to work - commuting to work by bicycle year-round.

There are a lot of reasons. Ultimately I only need one: I enjoy it.

All the rest are a bonus, but let me lay them out in some detail.

1. I enjoy it. I love to ride, but between working full time and raising two kids, it's difficult to find quality riding time. By combining my work commute with riding, I get roughly two hours of riding time a day, several days a week -- all while taking only a small amount of time out of my day. Got to get to and from work, right? I leave about a half hour earlier than I would if I were driving (not a problem since I'm an early riser anyhow), and get home only about a half hour later, so I still have plenty of time to do all the other things that fill my afternoons. It really works to my advantage.

2. Health/Fitness. Considering the widespread problems associated with obesity and inactivity, there can't be too many people who can honestly say they don't need to get more exercise. Riding to and from work regularly has kept me fit - and setting goals has kept me riding even through the winter months when getting on a bike doesn't seem like the natural choice. Recently I had to undergo minor surgery and in that process I had a virtual parade of doctors and nurses checking my heart rate and blood pressure. And each time, whoever was checking would see the numbers and remark with surprise at how good they were. Not just good heart rate and blood pressure for a guy my age - but good for a guy 10 or 20 years younger. "You must be really active," each one would say. I'd tell them I commute by bike, and they'd all say "that's got to be why."

I mentioned once in an older post about how commuting by bike has affected my weight too. Prior to the time when I started commuting by bike, I had reached my all-time maximum weight of 185 lbs. That might not sound like a lot for a guy 6' tall, but it was a lot on me and my frame, and I was even suffering from weight-related health issues such as sleep apnea and frequent acid reflux. Since I started bike commuting, I've been holding steady between 150 - 155 lbs, and those related health issues have vanished.

The next few reasons all have kind of a common thread:

3. Fuel savings. I hate buying gas and I always have. I really feel as though spending money on gas is not terribly different from taking money out of my wallet and burning it - it's just that it's being burned inside an engine instead of out in the open. Yes, that combustion is converted into motion/transportation - but if I can get where I need to go without spending that money on gasoline, and I get to ride my bike at the same time, then why would I drive?

Branching off of that reason is the fact that not only am I saving money by not buying gas, but in the bigger picture, I'm using less gasoline -- something that as a nation I firmly believe we all need to do.

4. Reducing emissions. Despite what certain politicians and millionaires who've made their fortunes from fossil fuels would have us believe, there really is no scientific debate about global warming. It's happening, and cars/trucks are a major culprit. For many of us (myself included) it isn't very practical to completely get rid of our cars. But most people aren't truly as dependent on their cars as they lead themselves to believe, and there's a lot we can do to reduce our dependence, and by extension, our emissions. Some people could reduce their personal carbon footprint significantly by simply trading in a huge truck or SUV for a smaller, more fuel-efficient car, but no car is as clean as a bicycle. I already drive a pretty fuel-efficient car - but by leaving it parked and riding my bike for commuting/transportation whenever possible, I'm both using less fuel (as already mentioned), but I'm also reducing my carbon footprint significantly. Just imagine the impact if everyone could routinely reduce their dependence by even just a few dozen miles per month. My own commuting to work has been reducing my driving by 2,000 - 3,000 miles per year. 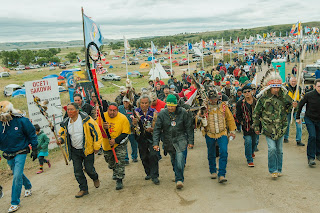 5. Sticking it to Big Oil. Using less gas means giving less money to Big Oil, and though it might make me sound like a Socialist to say it (actually, I kind of am a Socialist) I figure that oil companies have been sticking it to us all for years, and I'm all for sticking it back to them in the only way that matters to them - in their wallets. Remember what I said about global warming? Oil companies have been studying the problem as thoroughly as anyone can, and probably before most people even knew what it was. Their findings? That it's real, and it's happening, and fossil fuels are a major contributor. So armed with that knowledge, they've spent years and millions of dollars trying to neutralize other independent studies that would confirm what they already knew, and lobbying congressmen, and pushing a "climate change denial" narrative to convince people that the science is unclear -- all in the name of making sure we don't do anything to cut down on their profits. 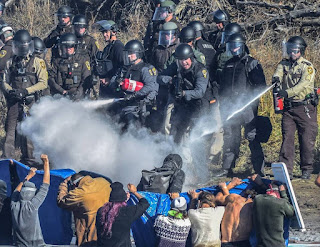 And as if I need to add to this line, I see what's been happening in North Dakota where the oil companies are pushing for the Dakota Access Pipeline, while Native Americans have been protesting the pipeline which is supposed to be built through their land. With funding from the oil producers, they've built what practically amounts to a private army to counter the protesters. The suppression tactics became what can best described as increasingly warlike, with not only pepper spray or tear gas being used, but also concussion grenades being launched at protesters.

Riding a bike and driving less is just one way to say "I don't support this."

Not that anyone NEEDS a reason beyond "I enjoy riding my bike" - but it begs the question: Why do YOU ride?
Posted by Brooks at 11:25 AM