Well, once again it seems that the reputation of the cycling world has taken another hit. On one hand, it seems like there's a concerted effort to get more women interested in riding - which, let's face it, would be a good thing for the industry (more people buying bikes) and the sport (more fans, more sponsors). But for every voice out there saying "let's get more women into cycling," there's some dumbass who makes some stupid move like this:

CW blamed the mistake on a "subeditor" who added the caption, which was not caught by other staffers before the magazine went to print. Was it "not caught," or was it simply overlooked by others who failed to recognize what lousy judgement it was?

Yes, the staff at Cycling Weekly issued an apology . . .

. . . which may be heartfelt and sincere and all, but wouldn't it just be great if the industry, and the sport, and the culture in general could get through a season without having to apologize to women everywhere because of this kind of idiocy?

About two years ago, it was this stupid tweet from the folks at Colnago:

And there is always the divisive issue with the "podium girls" (euphemistically called "hostesses") -- Like this recent story about AG2R rider Jan Bakelants: 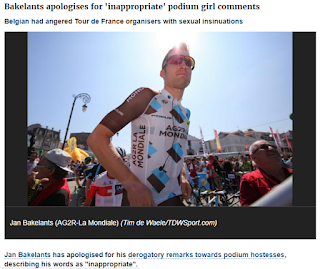 In a pre-Tour de France interview, Bakelants joked about the difficulty in going three weeks without sex during the Tour, and when asked what he would pack in his luggage, replied "Definitely a packet of condoms. You never know where those podium hostesses are hanging out." Jerk. 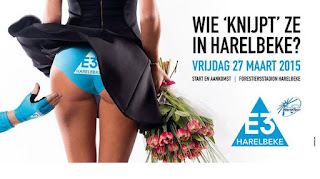 Which seemed to be right on the heels of this one: 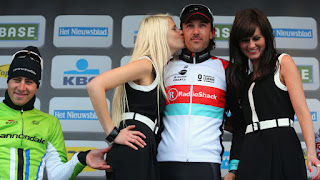 Getting back to the latest gaffe, the cyclist in the CW photo, a woman identified as Hannah Noel, posted on Facebook: "I made it into Cycling Weekly, it seems not for my ability as a female cyclist but as a 'token attractive woman' -- I'm absolutely gutted and disappointed in the magazine."

I read in some other commentary on the incident (I don't recall where) that Noel is a very tough and dedicated cyclist. I'm sure that the stupid comment from CW won't deter her, or at least I hope it doesn't - but sexist stupidity like that, and the other examples here, certainly don't encourage women to get involved with cycling - and probably does a lot to keep them away.
Posted by Brooks at 11:59 AM