It was just last month I wrote about the potential problems that surround driverless cars. Even as automakers and tech companies are racing forward on the technology, they admit that they still have a long way to go to make sure that driverless cars are as safe as promised. That doesn't seem to be slowing them down any, however. One of the biggest problems these autonomous cars have is recognizing and properly reacting to pedestrians and cyclists.

As it happens, Sunday night, a woman in Tempe, Arizona became the first pedestrian to be killed by a self-driving car. It was one of the self-driving cars being tested by Uber, and according to a police statement, it was in full-autonomous mode with a vehicle operator behind the wheel. Neither the car nor the human operator reacted to avoid the woman, 49-yr-old Elaine Herzberg, who later died at the hospital from her injuries. 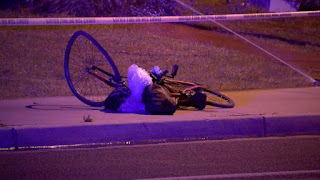 The first reports to go out after the incident claimed that the woman was on a bicycle, and the photos showed a damaged bicycle in a heap on the side of the road. That was not quite accurate, however, as it was later reported that while she was a cyclist, she was walking across the road and pushing the bicycle at the moment she was struck by the car. Ultimately, though, a woman is dead and it's a pretty minor distinction.

Police have said that the car was going about 40 mph at the time of the collision, and there was no indication that either the car or the driver attempted to slow down before the woman was hit. Reports are also saying that the driver showed no signs of impairment, and that prosecutors will review the case for possible charges.

Immediately after the crash, Uber suspended all of its self-driving car operations. Until this announcement, the service was running self-driving test operations in San Francisco, Pittsburgh, Phoenix, and Toronto.

I have no doubt that the Uber suspension will only be temporary, and that the other tech companies and the auto companies will continue their own testing and operations in the meantime. I hope that this death underscores to them all how important it is that they get this stuff right before unleashing it on the public. Consider that all of this technology is still in the experimental phase - but they're currently using our public streets as their laboratory. I wouldn't be disappointed if this incident slowed things down a little.

There are thousands of pedestrians and cyclists killed each year by living, breathing humans. The promise of self-driving cars is that, unlike so many cell-phone-addled drivers, they don't get distracted so they'll ultimately be safer. But this death is a stark reminder that we aren't there yet.

I don't think there's any question that self-driving cars are still coming. Despite this woman's death, the companies will keep pushing it. However, my fear is (and I hope I'm wrong) that we will likely see others get killed or maimed before they truly get it right.
Posted by Brooks at 11:33 AM