I recently came across an article in Outside online that rings more alarm bells about carbon fiber bikes and components - though it's all well-trodden ground on this blog. There's not much in the article that hasn't been raised plenty of times already in The Retrogrouch - it's just that I don't often see these concerns raised by more mainstream publications. 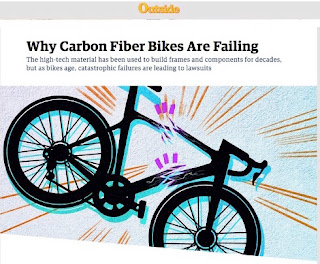 One of the more interesting things the article talks about is how, if someone has a carbon fiber bike and it fails, it can be difficult to get anyone to take responsibility. For example, a person may own a CF bike made by a huge well-known Taiwanese manufacturer (they're almost all made in either Taiwan or China) - but the bikes are actually distributed by another huge company (probably an independent subsidiary with the same name) based in the U.S. Now, let's say that customer's bike fails and they get injured. They sue the manufacturer in Taiwan - who claims that they can't be sued because they don't actually do business in the U.S. - if you want to sue someone, sue the U.S.-based distributing company. The customer tries that, but the U.S. company claims they can't be sued because they aren't the ones who actually made the bike. The difficulties can keep a consumer tied up in courts for a long time. Isn't that nice? According to the article, recent court decisions may make it a little easier for such lawsuits to move forward - but things are still in a state of flux.

Other more well-trodden points look at how manufacturing defects that can lead to failure may be hidden and very difficult to detect. Or how damage can come from an accident of some kind - but be unseen until it eventually fails - maybe long after the accident is long forgotten. Both are points I've raised plenty here over the years. If the manufacturer can point to an installation or maintenance issue or an accident (no matter how minor/insignificant it may have been) as the cause of failure, then there is no warranty coverage when the bike or component breaks.

Something I found odd in the article, though, was that it opened with a story that I'd hardly consider an exemplary case. Here's the opening:

Janet Kowal had a personal connection to the Register's Annual Great Bicycle Ride Across Iowa (RAGBRAI). Even though she’s now living outside Chicago, working for the Village of Burr Ridge town hall, Kowal has Iowa in her blood. The 2013 route would take her through her hometown of Des Moines and skirt the University of Iowa, where she graduated in 1987. Kowal bought a new-to-her 2007 Giant OCR C1 road bike for the event and, to be cautious, took it to her local bike shop for a full-service tune-up.

Not long into the ride, however, Kowal’s bike shattered beneath her. For no apparent reason—she’d neither hit an obstacle nor encountered a pothole—the front fork snapped in half as if it had exploded from within. Kowal was sent crashing into the pavement, helmet first. She fractured her spine and clavicle, suffered a concussion, and tore ligaments in her left thumb.

Okay - anybody else think it's weird that they focused on a 2013 incident involving a used bike that was already 5 or 6 years old when the woman purchased it? If the main point is that it really isn't a good idea to buy used carbon fiber bikes (or components), then point taken. But it seems to me that the intended point is broader than that. I mean, pursuing compensation when a used bike fails is complicated regardless of what material the bike is made from. Manufacturer's warranties almost never cover anyone beyond the original owner - and (as already mentioned) they are almost never held responsible if they can make the case that an accident or some user-error caused the failure.

One never knows what kind of accidents, abuse, or neglect a bike may have suffered under a previous owner, and with carbon fiber, the damage may be almost impossible to detect. At least with a steel bike, such problems can often be seen if someone knows what to look for. Steel wears its damage on its sleeve. The fork may be bent. There may be a ripple or a small crack developing somewhere. Paint could be bubbled or cracked.

I have no doubt that carbon fiber bikes today are better than those made ten year ago - and further improvements will be made. But it's all still developing technology. It begs the question how long will such bikes last? I have no qualms about riding a 40 or 50 year old steel bike. But where will today's carbon bikes be in 50 years?

Anyhow - it's worth clicking on over to Outside to read the article, but if you've been reading this blog for a while, there probably won't be much there to surprise you.
Posted by Brooks at 10:13 AM