A Visit To Maine

If the blog has seemed quiet for a little while, it's because I've spent the past week on a family vacation in Maine with little/no internet and fairly limited cell-phone coverage. That can be relaxing, but also a little frustrating at times. We've come to rely on our digitized world so much that it can be really hard sometimes to let go. It's funny that it wasn't really that long ago that the internet was little more than an interesting curiosity, and a phone was nothing more than a means to talk to someone - just talk - while tethered to a cord on the wall. My kids have never known the world to be different than it is today, but for me (and most people reading this blog), it's probably a bit staggering to think how much technology has come to run our lives.

My family and I have been staying in a cabin by a nice lake in the southern part of Maine. Actually, there are a lot of lakes in the vicinity - large and small - enough that apparently the area is known as the Lake Region. I brought my Rivendell along on the trip so I could do some riding.

Though I keep my bikes computer-free, technology or the lack thereof did enter into the riding experience a little - at least at first. Being totally unfamiliar with the area, getting out for a ride without knowing where I was or where I was going seemed a bit daunting. I tried using my phone's map functions to figure out some routes, but poor signal coverage made that sporadic and a little frustrating. I did locate a bike shop in the area so I paid them a visit and asked if they had any maps of the lakes and the roads surrounding them. That seems to me like one of those things a good bike shop should keep around, right? Well, no, they didn't have any maps. "Why don't you just use Strava like everyone else?" Ummm - because my phone barely works out here. I did eventually get to a café where I could get some internet access, find some maps, and copy them down onto paper for some riding routes/maps that would get me around even without technology.

One route I found was a loop around Sebago Lake, which was the lake on which our cabin was located. The loop around the lake was a little over 40 miles. I also worked out a shorter loop around one of the smaller lakes nearby, and there was a decent out-and-back ride to a neighboring town and a quiet road through the nearby state park. All told, I put in a lot of miles during the week and found some good photo-opportunities.
On one of my rides I found a little roadside stand selling just-picked blueberries. I stopped and bought a pint for a nice treat. Only $3 a pint, and worth it. Plenty for a snack on my ride, and lots left for breakfast the next morning.

The drive out to Maine took us through Vermont and New Hampshire. I have to say that I'd love to come back out with my bike for an extended riding tour through those states. The roads through the Green Mountains in Vermont were absolutely gorgeous. Throughout our New England drive, we chose to stay off the interstates and instead drove the two lane highways that took us through all manner of little towns - some quaint, some forgotten, some just barely hanging on. Though it takes a little extra traveling time, it makes for a much more interesting drive. 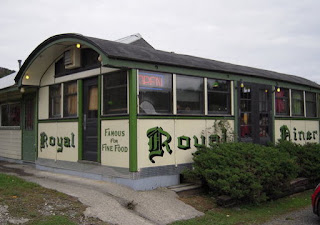 Brattleboro is one of those picturesque little towns tucked in among the hills. Lots of cool shops, cafés, brew pubs, and not one but two bike shops. While there, I had to get a picture of this:

In the little town of Bennington, Vermont, we entered the town's oldest cemetery - and found Robert Frost's grave. The English teacher in me had to document that.
While in Bennington getting coffee at a homey little café I met a fellow with a fully loaded Surly Long Haul Trucker who was on his way north to Montreal. Kind of sorry I didn't get a picture of him and his bike - but mostly I was a little envious. Definitely something I'll have to do some day.

That's all for this vacation - I'll be back at work all too soon.
Posted by Brooks at 9:07 PM