Rebecca Twigg: The Kind of Follow Up You Never Want to Write

A few years ago, I wrote an article Whatever Happened To Rebecca Twigg? The occasion was her 52nd birthday and it was an overview of her stellar career as one of America's best bicycle racers, and the love that I and so many others had for her. It turned out to be one of the most-read articles on this blog. Some time after that article posted, people started reaching out that there were some rumours about Rebecca and possible homelessness - that she may have been drifting from one acquaintance to another looking for places to stay, or maybe living out of a car. It was such an awful thing to contemplate, and I could only hope it wasn't true.

An article that appeared today in the Seattle Times made it pretty clear that the stories were true. 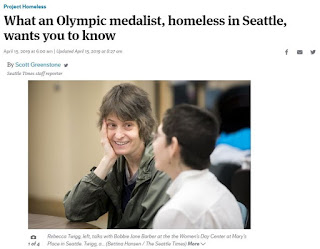 Writer Scott Greenstone managed to track down Rebecca's whereabouts and talk with her about her experiences. I won't recap the whole article here - just follow the links and read it. But essentially, the article gets into how transitioning from bicycle racing to the regular workforce was a struggle for her. Through years of travelling and training, she had kind of lost her "home base," and struggled to find the right career fit. Anxieties set in, and things went from bad to worse. Though there were often people who were willing to help, it was difficult for her to accept that help.

Near the end of the article, Rebecca says, "Shelters are great, but there has to be a next step. . . The point is not so much that I need help, it's that there are a bunch of people who need help -- 12,000 in this area, half a million in the country. Help should be provided for everybody, not just a few."

I don't know if there will be a happy epilogue to the story. Maybe the article will spur something to change and maybe things will turn around. It kind of sounds like she might not accept help that may be offered - particularly if it feels like a handout. But maybe just some help getting back on her feet and back on track. I just don't know. I. Just. Don't. Know.
Posted by Brooks at 12:50 PM