I got out for a ride today - a beautiful sunny Saturday - on my vintage red Mercian. I haven't ridden it since last summer because it has spent most of the past year hanging on the wall in my classroom. Keeping a few bikes there for much of the year frees up some space in my basement and garage, and gives me something to look it when I'm at work. But all the bikes come home for the summer, and I try to get out on all of them from time to time. They are not wall art, after all. But they are, in a way, time machines.

Wearing a traditional-looking vintage wool jersey, black shorts, low white socks, and vintage black riding shoes, I looked as if I'd been transported from 1982 as I rode past guys clad in garish neon lycra astride their carbon fiber wünderbikes. In some ways, I felt like I'd been transported in time myself. I was feeling fast and free - much younger than my 50+ years of age. In 1982, I was in high school and had only recently caught the bug that drew me to bicycles with such a passion. Back then I'd have lusted after a bike like the Mercian, though my newspaper route money didn't allow for more than a lower end Schwinn. 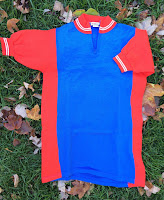 I'd forgotten what a pleasure the red Mercian is to ride. It's a Strada Speciale model, built from Reynolds 531 steel, with cool-looking "fastback" stays and neat little clover leaf cutouts in the lugs. The angles are pretty steep, and the wheelbase is pretty short - in typical '80s fashion. But despite geometry that could potentially be punishing, the bike seams to glide over imperfect pavement. Lately I tend to attribute a smooth ride to good large-volume tires - but the Grand Bois "Cerf" tires are only about 25mm wide. Yes, that's "fatter" than the 20mm tires that were so fashionable when this bike was new, but no doubt a lot of the ride has to be credited to a great steel frame. 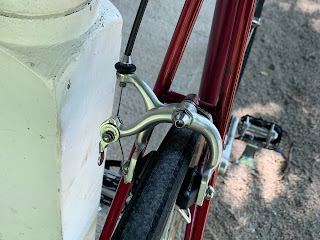 The red Mercian has changed a little since the last time it appeared here on the blog. One change was brakes. I had originally equipped the bike with late '70s DiaCompe "G" side pulls. They looked decent and didn't cost a bunch. But recently I switched those out for a pair of Gran Compe calipers from the early '80s - they were like the "next generation" after the old "G" model - with a nicer finish and more deluxe hardware. The older DiaCompe brakes were likely modeled after brakes from Weinmann (if I recall correctly, DiaCompe center pulls were a licensed knockoff of a Weinmann design) - but by the early '80s it seemed they'd set their sights on Campagnolo. These old GCs are clearly a step in that direction. They have great "feel" - and respectable stopping power. On a long fast descent I found I was getting a bit of squeal from the front brake, but the pads don't have any adjustment for toe-in - so I guess I'm going to have to do some bending on the arms. Just a little ought to do it.

Another small change was in the front derailleur. I had originally built this up with a SunTour ARX, which I've mentioned elsewhere on the blog is an under-appreciated shifter and a favorite of mine. I moved that one over to the Motobecane 650B project, feeling that the ARX was a better match for the SunTour Vx rear derailleur I'd installed on that bike. I replaced it on the Mercian with a first-generation Cyclone front unit to be the perfect mate for the Cyclone I have on the back.


One way I didn't feel as though I'd been transported back was on the climb out of the valley going home. The red Mercian has a 42-24 low gear. That would have been considered a pretty low gear back in '82 - at least for a racing bike. I can still manage it today, but if I could fit a smaller chainring on that old Sugino crank I might manage it a little easier.

That's all for now. If you have a vintage classic in your collection, I hope you'll get it out for a ride. Enjoy it like you would have when you were younger. Let it take you back. It's a time machine after all.