As I mentioned in the previous post, my family and I have been enjoying a week with our neighbors to the north in Canada, and I brought one of my vintage Mercian bikes to do some two-wheeled exploring during our stay. Our first stop had been in the Niagara region, and then we headed around Lake Ontario and up to the Province of Quebec to spend a couple of days in Montreal.

Now, I've been to Canada many times - mostly in Ontario, but also a visit to British Columbia some years back. One of the things that's pretty obvious when visiting Canada is that almost all signs (road signs, etc.) are in both English and French. I had assumed that this would still be the case in Quebec -- I mean, I thought maybe French would be first, with English second -- but I assumed signs would still be "bi-lingual." Turned out I was wrong. Quebec is pretty much "full-immersion" French. I should also mention that currently about half of Montreal seems to be under construction, with road and lane closures at just about every turn, and lots of detours. Believe me, it was an exciting (and nerve-wracking) experience trying to navigate the city while struggling to understand the road signs.

Let me back up a moment. So, in high school and college I had taken a little bit of Spanish, and a little bit of French. Not enough of either one to become even remotely proficient. And that was about 35 years ago. When reading in either language, especially if I have some context, I can usually get a decent gist of what something means, albeit slowly. But when someone actually speaks to me it's really difficult for me to process what they're saying. Hell, I can't even identify most of the words they're saying. So all over Montreal, every time someone would speak to me in French, I'd have this panic-stricken moment of indecision, kind of like a squirrel in the middle of the road with a car bearing down on it, then a confused verbal mess would pour forth from my mouth in a tangled combination of English, French, and Spanish. "Excuse me, parlez vous English, por favor?" Yeah - it's embarrassing. (However, one of our nights in town we had dinner in a great little Mexican restaurant where my unique SpaFraEnglish dialect worked out really well - just saying). Thankfully, most people we encountered were incredibly pleasant, patient, understanding - and bi-lingual. Friendly and pleasant - Canadians, this is why the world loves you.

Anyhow, Montreal has a reputation for being a very bike-friendly city, with miles and miles of bike lanes, paths, and other bike infrastructure all around the city. Unfortunately, a lot the previously mentioned construction is currently affecting the cycling infrastructure almost as much as for drivers, but I couldn't help but notice there are still bicycles and riders just about everywhere you look. It's clearly not stopping any riders.

My family and I were staying in a hotel near McGill University and just a few blocks from one of the most significant landmarks in the city - Mont Royal. On my first opportunity to get out on my bike, I did some exploring in the area near the hotel and the district known as "Le Plateau-Mont-Royal" which is a pretty laid-back, funky neighborhood. I managed to find a couple of bike shops that got my attention. 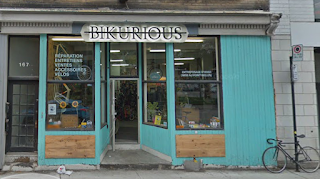 . . . Where I spotted some terrific eye-candy hanging around inside . . .

Later, riding along a bike route on Rue Cherrier, I came across Le Grand Cycle which practically begs a cyclist to stop in. 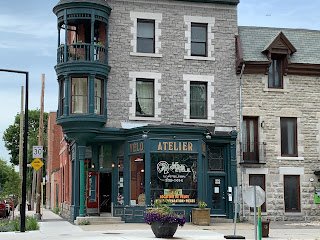 Just inside, hanging over the door was this nice vintage Campagnolo-equipped Marinoni. . .

When I walked into Le Grand Cycle with my vintage red Mercian, I immediately got compliments from several people inside. One of the associates was having his lunch when I walked in (poutine, of course) but was eager to take time out to talk bikes. I told him a little about my Mercian - he wasn't familiar with the marque - as he was admiring the details of the lugwork, vintage components, and its original paint. We had a nice chat, then he gave me a detailed map of Montreal and its network of bike routes, and gave some recommendations for places to see. What a great little shop! I was really glad I had stopped in.

One of the places he recommended I ride was the aforementioned Mont Royal.

One cool bit of cycling-related history is that Mont Royal was a significant feature of the 1976 Montreal Olympic bicycle road race. The race course circuit had the racers climbing Mont Royal 14 times. And American rider George Mount finished in 6th place overall -- one of the first hints that American cycling was finally starting to come of age. You can watch a few highlights from that race here:


The video quality isn't great - but notice near the beginning of the coverage that the commentator points out George Mount and then says "he's not expected to do much." Nice to know he had to eat those words. From watching the video, it seems that when it was raced in the '76 Olympics, the main route up to the summit was probably paved. Today, the route is a mostly firm-packed gravel (if someone knows more about that, feel free to leave a comment). 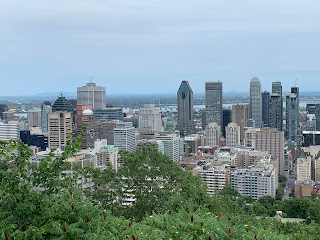 Right near the summit of the mountain is this cross (you could see it in one of the photos above, looming over the city). The path takes you right up to it.

Another place I got to explore was the Old Port area, where Montreal might easily remind one of a European city. Cobblestones and narrow streets and alleyways. Lots of sidewalk cafes, with artists and performers at every corner, interesting shops, and lots of "people watching" opportunities. It was also packed with tourists. It was, I regret, an area perhaps better explored on foot than on wheels. 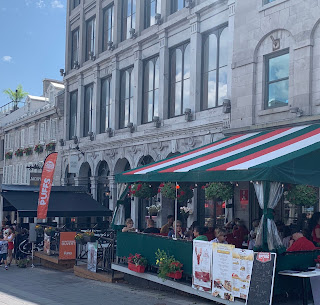 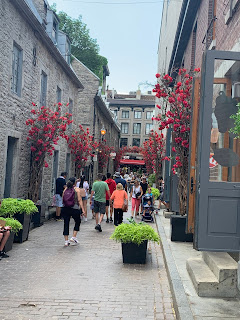 After a couple days and nights in Montreal, we made the drive up the Saint Lawrence River to the city of Quebec.