Back in the early '80s when I was first catching the bike bug, Specialized was likewise just starting to expand from tires and other bike components to frames and complete bikes. Their Allez and Sequoia models were the first offerings, soon followed by the Stumpjumper mountain bike, and the Expedition grand tourer. With well-designed frames and top-notch Japanese construction, their early bikes were lustworthy - and to a lot of retrogrouches, they still are. 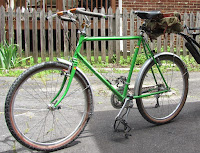 I have had one of the early Stumpjumpers for a while now. It has become my kid-and-grocery hauler. For a lot of years, that was the bike to which I'd attach the Burley or the Trail-a-Bike kid trailers (sometimes both simultaneously). Nowadays I hook up an old Burley that I converted into a flatbed cargo trailer and haul groceries. Those early Stumpies have some cool build details, like lugged frame, fastback seat stay cluster, and a cool twin-plate "bi-plane" fork crown. I had mine powder coated in "Kawasaki green" and "updated" it with mustache bars and slightly more modern components ('90s instead of '80s). 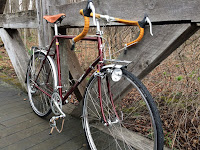 A few years ago, I restored an '83 Expedition. That one is a real beauty, and one of the best long-haul touring bikes of its time (or any time?). I kept consistent with what was original, and made some reasonable updates and upgrades to the components, using '80s vintage Specialized components wherever possible - like crank, pedals, seat post, etc.. I also took advantage of the fact that the frame was wired from the factory for a bottom bracket generator, and installed the generator and a headlight for some on-demand lighting.

Always interested in "completing a set" of the early Specialized bikes, I've long had my eye open for the early generation Allez and Sequoia models. It wasn't long ago I got outbid on a 1st-gen Allez, designed by Tim Neenan (currently of Lighthouse Cycles) and possibly built by Yoshi Konno (of 3Rensho fame). I would have had to see it up close (or have had some better pictures) to say for sure if it was a Konno-built Allez, but I was interested in it regardless. Ultimately it didn't matter, as I hadn't bid enough to win it anyhow.

Recently I found the other bike I'd been looking for. A decent '82 Sequoia frame came up in my size for a price I could live with. The paint was pretty scratched up, there was some minor surface rust, and the decals were faded and/or peeling. But the chrome was still good, and there were no dents or dings, so I thought it would be a good candidate for restoration. 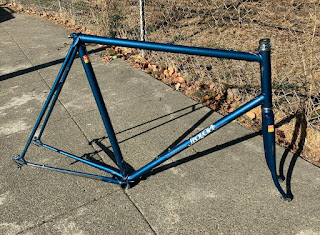 Like the original Allez, the Sequoia was also designed by Neenan, and the very first shipment of them (consisting of a few hundred frames as I understand it) were also built in Japan by Konno. Those ones can be identified easily because they have a fastback seat stay cluster. One can see a picture of Mike Sinyard's Konno-built Sequoia in a BikeRumor article about Specialized's headquarters and museum. Frames like mine, with a tidy, fluted seat stay treatment, were either built by Toyo, or the Miki frame shop (or possibly even Miyata) but I can't say for sure which one. I've looked into it, and even the people who were involved with frame production at Specialized in the '80s (Tim Neenan, Bryant Bainbridge, and Jim Merz - all of whom still participate in the various online bike groups/forums) seem to have some conflicting info about which frames were made where or when. I mean, we're talking about nearly 40 years ago, now. I imagine they could all be equally correct and incorrect in their memories to some extent, and different shipments could have come from different sources in different years. 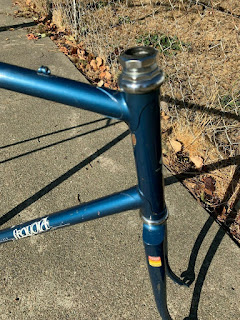 The Sequoia was meant to be the ultimate "sports tourer" - a fast, racy bike that could accept a rack and do some light touring - a great "all-'rounder" road bike. It was designed for "normal reach" brakes (which by today's standards would be like "medium-long") and could fit larger tires than an all-out racing bike of the day. I haven't put tires into it yet, but I expect (or am hopeful) 32mm tires would fit - though maybe not with fenders. A 1982 Bicycling magazine test gave the bike excellent marks for ride quality, giving much credit to the specially selected Tange tubing - with a heavier-gauge down tube, but lighter top and seat tubes. That review also had the Sequoia fully equipped for touring with racks and panniers both front and rear.

I did narrow mine down to '82 by looking at a few details (besides the fact that that was how it was sold to me). One is the look of the decals, which are the second style, but still have the "Designed by Tim Neenan" sticker on the chain stay. The bikes later underwent a minor redesign by Jim Merz - I think maybe in '83(?). Mine also lacks shift lever bosses, which I believe were probably added in '83. From what I can gather by looking closely at other examples I've seen, I think when Merz updated the design, the frames got slightly shorter point lugs and a fork crown engraved with a slash-style Specialized "S" icon. The lugs on mine are very long-pointed, and the fork crown is bare. Also, the Merz redesign added some bottle cage bosses to the seat tube, whereas mine has bosses on the down tube, and another pair under the down tube (as seen in the '82 ad above), but none on the seat tube. That under-the-down-tube bottle location is an odd one. Loaded touring bikes would sometimes have it (my Expedition does, for example) and many riders would use it to hold a camp stove fuel bottle. It's an odd thing on a bike like the Sequoia though, and I'm likely to never put those bosses to any use. Fun side note: I once saw where someone had a mini-sized bottle cage on that set of "underneath" bosses that held a bottle of Phil's Tenacious Oil. Why anyone would need to carry a whole bottle of Phil's oil with them on rides, I couldn't say - but it was cool and quirky enough to make me want one. 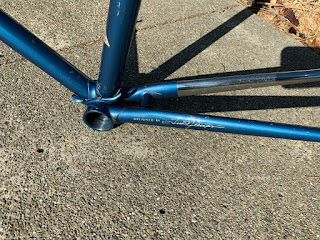 So now that I've got the frame, I'm evaluating what parts I have, and what parts I'll need to complete the bike. As pointed out in my last post, I have several nice old SunTour Cyclone derailleurs to choose from, as well as a pair of normal reach Superbe brakes, and Cyclone hubs - so I'm thinking I'll do a mostly SunTour build-up, which is how a lot of these left bike shops in the early '80s.

I'll have more on that in upcoming posts. Stay tuned. . .