I'm a bit late in posting this, but last month the bicycling community lost a true friend and fount of knowledge with the passing of Frank Berto, author of several books and longtime contributor for magazines like Bicycling and Bicycle Quarterly. He was 90 years old.

Berto wrote more than 100 technical articles that were not only authoritative, but accessible and engaging to read. One of his best contributions to the bicycling world was his objective study of bicycle gears and changers. Cutting through all the marketing hype and mythology surrounding derailleurs, Berto built a testing rig using the lower half of an old bicycle, an electric motor, and some gauges, that allowed him to precisely and uniformly measure how well and quickly a derailleur would complete a shift. His testing proved that cost had little relationship to shifting quality, and that less expensive units (like those from Japanese maker SunTour) would handily outperform much more expensive ones. One of the long-lasting outcomes of that work was that eventually all component makers would adopt the "slant parallelogram" design originally patented by SunTour. The superiority of that design (supported by Berto's independent testing) is due to the fact that it allows the derailleur to better follow the profile of the cogs, keeping the "chain gap" between the upper pulley and the cogs more consistent. His study on optimal tire pressure is also well-regarded and has helped to improve the quality and performance of todays bicycle tires. 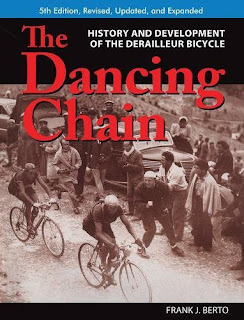 As mentioned, Berto was the author of several books on cycling, the most notable being his extensive history of lightweight derailleur-equipped bicycles, The Dancing Chain. I have found that book to be an enjoyable read, and an indispensable resource. I have read it cover-to-cover -- and I find myself revisiting parts of it again and again, particularly when doing research for articles on this very blog. Another book that I haven't yet read (but plan to soon), is his history of mountain bikes, The Birth of Dirt.

Frank Berto's technical prowess came from his Masters Degree in Mechanical Engineering (California Institute of Technology, 1958) and his work as an instrumentation consultant for the oil industry. But he loved bicycles, and spent much of his spare time applying his knowledge to studying and improving them - and sharing that work with the rest of us through his articles and books.

I'll wrap this up with a Thank You to Frank for all he shared with us, and heartfelt condolences to his family.
Posted by Brooks at 2:48 PM