I thought I'd take a moment to share a recent find that I've added to my collection of vintage parts: a first-generation SunTour Cyclone derailleur, new-in-box - or NIB.

I've always been a SunTour guy, and the Cyclone has long been a favorite. I have a couple of them, both in short cage and long-cage GT versions, and one of them gets pretty regular use on one of my vintage Mercian bikes. I have a second-generation version (M-II) on my Sequoia. Clean or lightly-used examples come up for sale frequently, but finding one like this is rare these days. 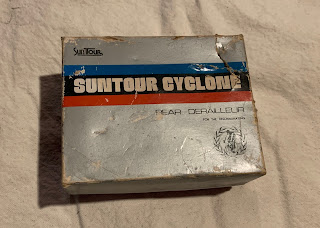 The box has seen better days, but it doesn't matter because what's inside is still perfect. 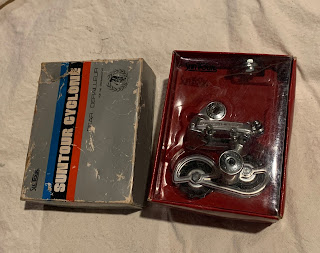 Lift the lid, and there's this clear plastic display cover, and a red plastic tray that is form-fitted to hold the derailleur. Notice there's also a little compartment to hold the hanger "claw" that one might have needed if their bike didn't have an integrated derailleur hanger. The original manual is tucked underneath the red tray, out of sight.
It's really very lovely packaging - it isn't hard to imagine the components in a bike shop's glass display case, tempting a younger version of myself. 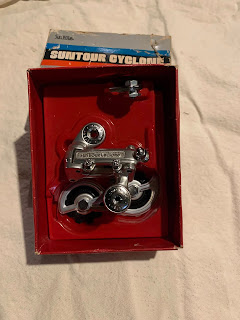 With the clear plastic cover removed. 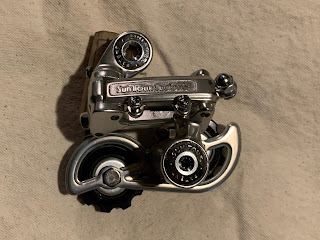 And here it is, freed of its packaging. The date code on the back of this example is "R D" which, according to the Vintage Trek site means it was made in April 1975 - well within the first year of production.
There were some very small changes made in the first generation Cyclone derailleurs during their production run - mainly in the design of the upper pivot arm. These very first versions have a shorter, more compact upper arm, while later ones have a slightly longer arm that drops the parallelogram a few more millimeters. It was a subtle difference, but it probably increased the largest cog size they could handle. Or at least, that's my guess.
These early Cyclones were one of the lightest derailleurs a person could buy, at only 175 g. They were beautifully finished and detailed, and cost less than anything in their class. In 1975, a Campagnolo Nuovo Record cost $40, as did a Huret Jubilee. A Shimano Crane (Dura-Ace) was $20. The Cyclone was $16, and shifted better than all of them. I think they get more respect today than they did when new. Price-snobbery tended to make people think SunTour was "lesser" somehow because they were cheaper, when the only "lesser" was the price.

I don't have any immediate plans for this one. It was just one of those things where I spotted it for sale and the price was too good to pass up. Not much else to say about it - so I guess that's bye for now.